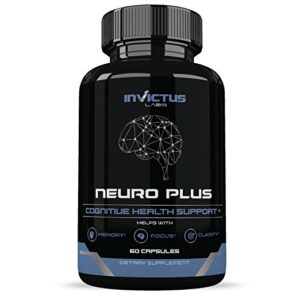 Neuro Plus isn’t just like your other “neuro” cognitive health support supplements. It’s like them… plus more — hence Neuro Plus, my friend.

Except what this really means is that Neuro Plus is exactly like other “neuro” cognitive health support supplements, even sharing the exact same formula as other supplement brands. And the “plus” portion comes in the form of… I don’t know — having two capsules per serving instead of one?

I can tell you right now: I’ve reviewed other supplements that share this formula, and I didn’t like those supplements. But, to be fair, I’ll treat Neuro Plus as a single, standalone brain health stack, wiping the slate clean for the Neuro Plus review. And all you’ll need to do at this point is read it. Enjoy.

Serving Size: 2 Capsules
Servings Per Container: 30
Other Ingredients: Cellulose (Vegetable Capsule), Rice Flour, Magnesium Stearate, Silicion Dioxide
Directions: As a dietary supplement take two (2) veggie capsules once a day. For best results take 20-30 min before a meal with an 8oz. glass of water or as directed by your healthcare professional.

Neuro Plus packs a lot of ingredients in its 2 caps serving size. On a first impression basis, this doesn’t bode well for Neuro Plus’ final review. But I’m not one for first impressions. I’m here to take on the whole thing — piece by piece — so let’s do that in the “Ingredients” portion of this Neuro Plus review.

Overall, Neuro Plus supplies a total of 21 vitamins and minerals here, which might be a reasonable amount for a standalone multivitamin supplement… but for a nootropic cognitive enhancer? That’s a bit much. And if the poor dosages on several of these ingredients are any indication, it’s too much.

As far as cognitive enhancement goes, some of the vitamins and minerals may help, namely the B vitamins. These B vitamins work well with, say, L-tyrosine (which can be found below) in converting amino’s to catecholamine neurotransmitters. However, the slipshop design of this formula’s multivitamin portion casts plenty doubt on whether or not this stuff actually works.

Because it’s highly unlikely that every ingredient in this blend actually works, due to the overall low dosage of this proprietary blend, I’ll only cover the ingredients potentially worth covering. Here goes:

DMAE (Dimethylaminoethanol) – An interesting first choice (I say passive aggressively), given that DMAE isn’t the most promising nootropic compound. It may help improve cognition otherwise impaired by hyperactivity, but the research simply isn’t quite there yet on this guy. More on DMAE.

L-Glutamine / Glutamic Acid – Another questionable ingredient. L-glutamine is the body’s most abundant amino acid. Supplementing it may improve, or rather sustain, cognition following exercise, but as a standalone ingredient it barely, if even, qualifies as a nootropic. More on L-Glutamine.

Green Tea Extract – Green tea supplies a rich spectrum of neuroprotective and neuroregenerative antioxidants. Neuro Plus fails to describe the contents of this extract, but generally speaking green tea extract is a healthy choice.

Bacopa Extract – As one of the best herbal nootropics, Bacopa monnieri is a popular item among manufactured nootropic supplements. The Ayurvedic adaptogens seems to improve memory and learning by enhancing the brain’s acetylcholine status. More on Bacopa Monnieri.

Choline Bitartrate – Speaking of acetylcholine, choline is the necessary precursor required for acetylcholine synthesis. However, choline bitartrate has a hard time passing the blood-brain barrier, which is why citicoline or alpha-GPC the preferred nootropic choline sources. Waste of capsule space here. More on Choline.

Grape Seed / Fruit Extract – My hope for these two extracts is that they supply pterostilbene, the more bioavailable form of the more popular resveratrol, a well-known grape and berry antioxidant. But, again, Neuro Plus fails to detail the contents of these extracts. More on Pterostilbene.

Huperzine A – Sourced from Chinese club moss (Huperzia serrata), this semi-synthetic nootropic drug improves cognition by inhibiting acetylcholinesterase, the enzyme responsible for breaking down acetylcholine. More on Huperzine A.

“Neuro Plus is different because the ingredients are limited to the most effective research-based ingredients to bring you the best results.” — this is a bold claim coming from Neuro Plus, considering that, well, Neuro Plus is absolutely not different.

For example, check out my Neovicta Clarity review. Notice anything different? Me neither, besides the fact that Neuro Plus at least doubles the serving size count to 2 capsules over Neovicta Clarity’s 1 capsule formula design.

It’s a strange thing, the use and reuse of this particular formula. And it’s strange for a couple reasons:

Ever since I began tapping into the Amazon featured nootropic supplements, I’ve noticed many supplement brands sharing the same formula. And more often than not the formula’s not all that worth sharing. To an extent, I can understand supplement manufacturers imitating well-designed formulas, such as Mind Lab Pro or Alpha BRAIN. But Neuro Plus’ formula is pretty bad, sporting weak dosages and ineffective nootropics.

On the whole, there’s not much to recommend here, despite the overwhelming quantity of ingredients in this “Cognitive Health Support” stack.

The Amazon listing for this product gives Neuro Plus a “$0.20 / Count” measure, which is true for the price per capsule average. However, on a per serving basis, that number doubles to $0.40, which is still very cheap for a nootropic brain health stack.

Who Takes Neuro Plus?

By not committing to any particular target audience, Neuro Plus seems to be casting a wide net, hoping to reel any as many customers as it can from all walks of life. Having said that, the sleek design of the bottle seems geared towards the average, healthy, younger user… who likely wouldn’t benefit much by this formula.

You can buy Neuro Plus through Amazon. Invicus Labs lists Neuro Plus on their website — however, following their Neuro Plus links will ultimately lead you to the Amazon order page. So, as far as I know, Amazon is the go-to spot for this supplement.

Conclusion: Does Neuro Plus Work?

At best, Neuro Plus might replenish some of your brain’s nutrient levels with its multivitamin portion. However, even as a multivitamin supplement, Neuro Plus doesn’t do enough to warrant a buy. So, it’s “at best” is still pretty bad.

All-in-all, Neuro Plus reads like an overstuffed multivitamin with no heart or genuine passion towards boosting brain health. In other words, it’s simply another cash-grab product not worth the cash it’s grabbing. My recommendation: pass on this one. There are better nootropic supplements out there.