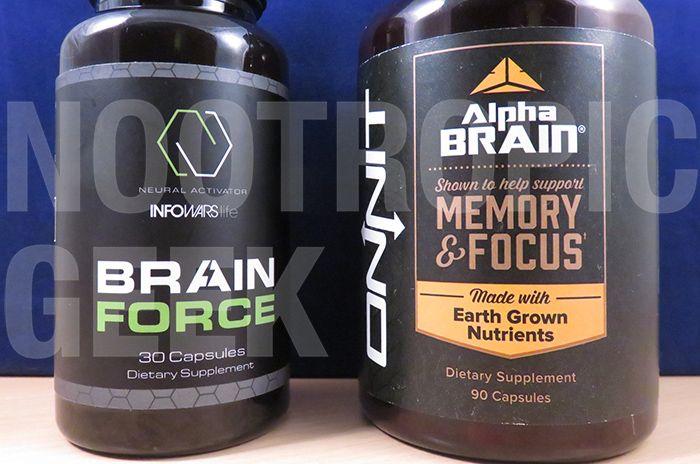 Listeners of Joe Rogan’s podcast will know that the ex-Fear Factor host is friends with Infowars’ Alex Jones, the controversial conspiracy theorist who seems to pop in & out of headlines from time to time.

I aim to put that friendship to the test by sizing up their associative nootropics side-by-side:

For the record, I gave both of these products favorable reviews in their independent nootropic review articles. But that’s not what matters in these comparative reviews: What matters is which is better? Which is worth your dolla-dolla?? 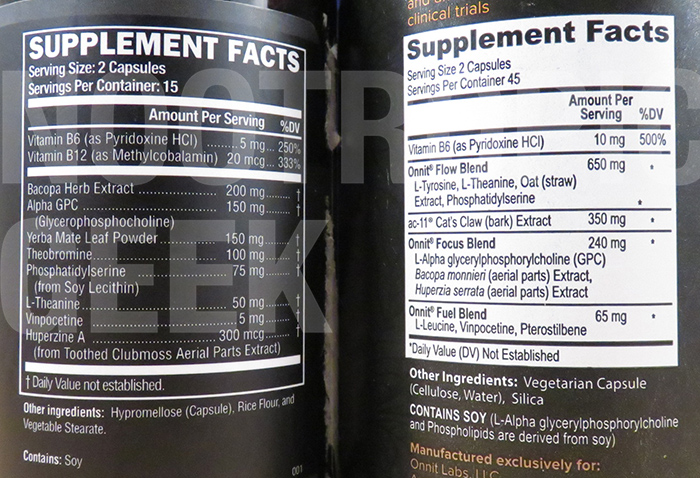 In terms of ingredient choices, Brain Force & Alpha BRAIN have much in common. Powerful natural nootropics such as Bacopa Monnieri, Phosphatidylserine, L-Theanine, Huperzine-A, and Alpha-GPC are shared between the formulas, in addition to mood-booster Vitamin B6.

Yet, there remain a few key differences that set these products apart, namely in the underlying purposes of their overall formula designs:

These days, Infowars is a divisive subject in the media. Regardless, the network’s intent on “freeing the mind” from all of the “toxic weapons” in our diet & culture seems genuine with this well-crafted, Earth-grown blend of nootropics that nourish the brain as much as they boost cognition.

Not that there aren’t any questionable ingredients in this stack–for instance: Theobromine, the non-nootropic “love drug” stimulant in chocolate, and Yerba Mate Powder, which reads like a potentially sneaky source of undocumented caffeine.

Even so, the ingredients listed above (that can also be found in Alpha BRAIN) provide a diverse range of brain benefits that may support cognitive performance for students, workers, & anyone else in need of extra brainpower.

There are three key functions supported by Alpha BRAIN, which are represented by the titles of the product’s proprietary blends:

Aside from these blends, the star ingredient in this stack is AC-11, a branded extract of Cat’s Claw, which is being touted as a nootropic, but currently lacks the research to validate this claim. Even so, I like its presence here for its exceptional potential in this formula. Read my in-depth review on Alpha BRAIN.

In my mind, when I imagine Brain Force & Alpha BRAIN sitting side-by-side, I actually imagine Joe Rogen standing next to Alex Jones–the somewhat official faces of these products, both being characters who are unique in their own rights.

Yet, when I look at the contents of the formulas, there isn’t much to set them apart, with the exception of a few unique features, including:

One thing that Alpha BRAIN needs to learn from Brain Force: Transparency matters.

While Alpha BRAIN’s proprietary blends look solid, well-designed & adequately dosed, they obscure the individual ingredient dosages for each nootropic, in effect obscuring my confidence in the formula. This is typically one of the first things I look for in a nootropic supplement, so it’s never a good start, even for solid supplements, when they decide to go with proprietary blend formulation.

Yet, this doesn’t let Brain Force entirely off the hook: Just because I can see all of its ingredient dosages, doesn’t make them all automatically good. For instance, the 50 mg L-Theanine is weak sauce, leading me to believe that Alpha BRAIN might actually supply more of this powerful nootropic than Brain Force.

Furthermore, Alpha BRAIN supplies double the B6 amount found in Brain Force. Not that this is a huge deal, but yee. It is something.

If you go with the Brain Force Plus formulation of Infowars creation, then you lose out on Vinpocetine, which is one of my favorite nootropics, but you get Black Pepper Extract, which directly boosts the measures of this segment: Potency & Quality.

However, between Brain Force & Alpha BRAIN, the formulas are practically equal in this department. The former has some dosages that could be improved. The latter needs to show its dosages. Yet, both supply generally above-average potency & quality.

Take Note: Brain Force Plus sells for the same price, but notches in 20% more (3 extra servings)–which would reduce the Price Per Serving down to $2.22. This is clearly the better option over the vanilla Brain Force supplement.

Brain Force or Alpha BRAIN: Which is better?

This mental energy may come at the cost of caffeinated jitters & Theobromine stimulation–i.e. bio-actions that aren’t necessarily good for you. However, combined with the brain healthy, focus enhancing ingredients, this mental energy seems manageable, if not beneficial to sustaining healthy mental production.

This is one of those comparisons that I didn’t want to do, because I actually like both of these formulas. They’re surprisingly well-designed & well-formulated, stacking up a surprising amount of well-researched, brain healthy nootropics. While I typically view celebrity endorsements as bought-off bogus, the fact that Joe Rogan & Alex Jones are so active in promoting their formulas speaks on a positive level.

The fact that the formulas are actually good supports this notion.

Yet, all of this aside, I do recommend one stack over the other, simply for having more nootropics than other. I am, after all, the Nootropic Geek. I like nootropics. So I’m going to go with the formula that has more nootropics.

And that formula is: Alpha BRAIN.