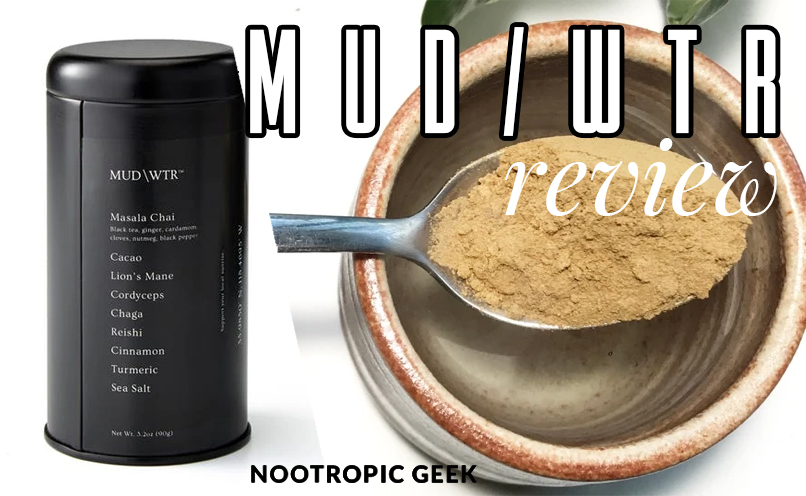 A trendy coffee alternative boasting 1/7th the caffeine of coffee, MUD/WTR consists of several organic herbal and fungal adaptogens intended to boost natural energy, focus, and immunity without the jitters. Does it work? Ehm, kind of — though to be honest I ended up just finishing the tin by adding the scoops to my morning coffee. Some complain of the taste, I don’t mind it. But it’s not exactly groundbreaking as far as coffee alternatives or natural nootropic powders go.

Serving Size: 1 tbsp (6g)
Servings Per Container: 30
Directions: Add a tablespoon to hot water and add whatever you like — e.g., a little creamer, some honey, or even bulletproof-style. Stir before drinking.

According to the website, cacao is the most abundant ingredient in the formula, whereas the mushrooms (chaga, reishi, lion’s mane, cordyceps) comprise 2g of the full 6g serving. In general, it’s always better when brands reveal all of their ingredient dosages. (Don’t believe the “proprietary secrets” excuse — it’s BS.) On that note, let’s take a look at all the moving parts in this formula:

Without having a full grasp on each ingredient’s dosage, it’s difficult to determine which ingredients we should specially focus on. With that in mind, here are the ingredients listed outside of the two blends on the Supplement Facts:

And, now, here are the ingredients in the two blends:

Chaga – Used for centuries throughout Siberia and other Asian regions, chaga is an antioxidant-rich mushroom that may help regulate your immunity and inflammation. Though somewhat lacking in clinical research, chaga has long stood the test of time as a valuable natural health and vitality booster.

Reishi – Stress relief, liver support, detox — reishi mushroom is typically taken for immune health purposes, with the added benefit of there being potential neuroprotective bio-activities with this mushroom. Not a bad addition here.

Lion’s Mane – My favorite fungal supplement (next to maybe the next one), lion’s mane is well-known among nootropic nerds for its unique well-documented boost on NGF (nerve growth factor), which in turn enhances brain repair and recovery, as well as long-term cognitive health. As a dish, too, lion’s mane is pretty good. More on Lion’s Mane Mushroom.

Cordyceps Mycelial Biomass Cultured on Oats – A uniquely energizing shroom, cordyceps has been used increasingly in ergogenic “pre-workout” type supplements, as well as some male health-type stacks. This is more a physical health enhancer than a mental one, though many cordyceps users associate the shroom with increased mental energy and assertiveness as well.

Mostly intended to improve the taste of MUD/WTR (so that it doesn’t actually taste like mud), the organic spice blend supplies a combination of organic cinnamon, turmeric, ginger, cardamom, black pepper, nutmeg, and cloves. Of these, the most brain healthy is turmeric (read my turmeric review here), which is smartly combined with black pepper to improve the antioxidant spice’s nutrient bioavailability. Cinnamon, the highest dosed ingredient in this blend, also supplies some beneficial flavonoids and antioxidants, though its primarily value here is in its taste. I wouldn’t necessarily qualify it as a “superfood” spice to the degree of turmeric.

Let’s get this out of the way first: caffeine alternatives, like Adderall alternatives, don’t really exist. There are no compounds that can deliver the same feel-good stimulatory benefits as caffeine without the drug’s downsides. I’m sorry but c’est la vie.

On that note, MUD/WTR isn’t a true coffee alternative — it’s a healthy herbal/fungal drink mix with a little bit of caffeine that, ultimately, will just leave you still wanting your morning coffee, if you’re a habitual coffee drinker. In fact, only a few days into trying MUD/WTR and I was adding this stuff to my morning coffee, which, if you’re not caffeine sensitive and you don’t necessarily want to give up coffee, is how I recommend taking this stuff.

Granted, taking plain jane MUD/WTR without coffee is probably the healthier option here… but I’m just being real with you with my experience. With many of the (admittedly good) ingredients found in MUD/WTR already available to me in the many other nootropic powders and supplements in my cabinet, I found MUD/WTR to be relatively unnecessary and underwhelming to my typical (and more cost effective) daily nootropic routine. And this isn’t good when you consider that MUD/WTR lacks the boldness of coffee (both in terms of taste and mental stimulation), despite being a much pricier habit — especially if you’re drinking multiple MUD/WTR cups the way you might with coffee.

Personally, I’m skeptical that anyone actually wants a coffee alternative. Many consumers say they want to cut back on their caffeine intake and all that — especially consumers of the health trendy “I’m just a cool Curious George hippie guy doing yoga in my linen pants and in front of a professional photographer” Aubrey Marcus types, a type I suspect the creator of MUD/WTR, Shane Heath, to be. But I doubt that’s actually the case.

If anything, the move for these manufacturers shouldn’t be to deliver an alternative to coffee but simply a better coffee. That’s exactly what I did for myself by adding MUD/WTR to my coffee, at least until I ran out of MUD/WTR… after which I didn’t see a need to buy more, as I personally already have these ingredients — and I have them in transparent measurable amounts, something MUD/WTR with its use of proprietary blends can’t claim. 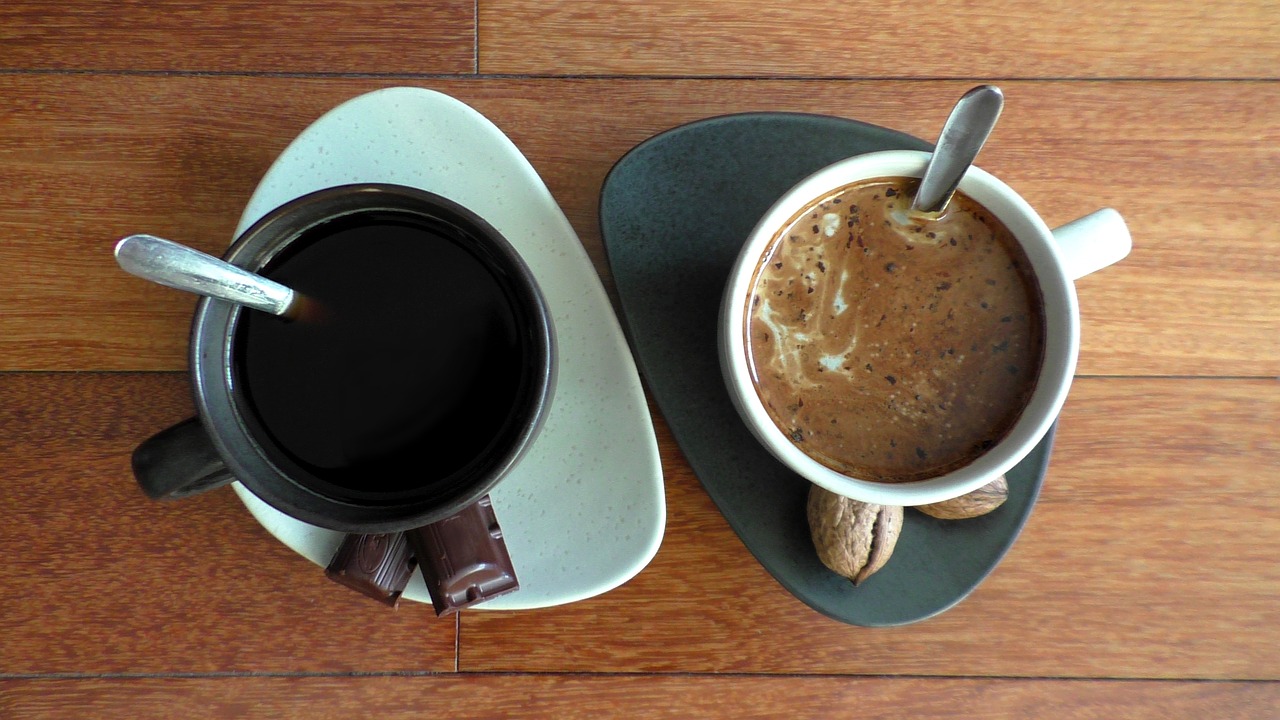 Respect to everyone who totally cuts caffeine from their daily routine… but I enjoy my morning cup of coffee. Especially when I augment its effects with beneficial brain-healthy nootropics. With some day-to-day variation, here’s the foundation of the nootropic stack I mix with my morning coffee:

And if I’m feeling especially randy, I’ll add some aniracetam or oxiracetam for that additional boost. Otherwise, the anti-fatigue, dopaminergic benefits of Rhodiola and L-tyrosine mixed with L-theanine’s complementary effects with caffeine are more than enough to lift my morning focus and energy. Meanwhile, the cacao noticeably lifts my mood — I love that stuff.

The fact that MUD/WTR advertisements pop up on Instagram fairly often, combined with the new age-y (pseudo-)spiritual branding of both the product and of Shane Heath (a la Aubrey Marcus), feels like MUD/WTR is trying to become a hot guy/girl thing — kind of like how Bang energy drinks associated itself with hot fit IG models. Although MUD/WTR is doing this with a more wholesome Earth-grown “channeling the vibes of our ancestors” bent.

You can buy MUD/WTR at the MUD/WTR website. As far as I’ve seen, this supplement isn’t sold on any third-party retailers, such as Amazon or GNC.

On that note, if you have extra money to spare, adding MUD/WTR to your daily routine isn’t a bad idea. But, personally, I’d recommend just buying the main ingredients in bulk and measuring out your own DIY “mud water” for better benefits and, ultimately, less money.