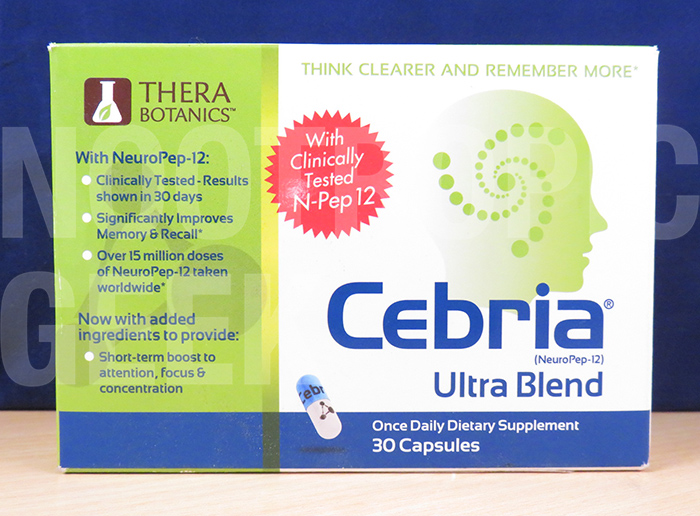 Vladimir Nabakov, in his autobiography Speak, Memory, described memory as:

the masterly use it makes of innate harmonies when gathering to its fold the suspended and wandering tonalities of the past.”

Thera Botanics, the manufacturers of Cebria, on the other hand, describe memory as Neuropeptides… I know: How elegant. Except both Nabakov & Thera Botanics are right: Memory is essentially wandering tonalities of the past biologically supported by neuropeptides. So when age-related memory loss becomes an issue, is the solution as simple as supplementing neuropeptides?

I can’t remember, so let’s get with the review: 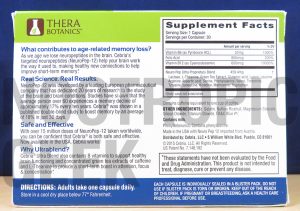 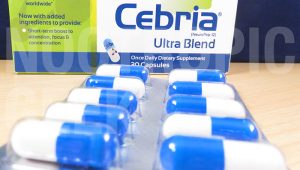 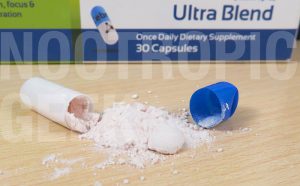 Lots of acids & -ines here. And sitting at the top is Lactose, i.e. milk sugar. Are these the neuropeptides Cebria is talking about? Before we tap into the blend, let’s read a couple B vitamin reviews:

Vitamin B6 (as Pyridoxine HCl) – The right B vitamin for mood-enhancing cognitive benefits, even though P-5-P is the superior form to Pyridoxine HCl. More on Vitamin B6.

Folic Acid & B12 – Not true nootropics, but the combo is believed to supply good synergetic cognitive benefits for men & women over 60 years of age. Not a bad duo for this particular supplement stack. More on Vitamin B12.

Of these, the few ingredients that may be supplemented as nootropics are L-Theanine, Green Tea Extract (maybe), Serine, & Tyrosine. Yet, I wouldn’t bet too much on them considering that we’re thinly spreading 445.3 mg to cover 17 ingredients, of which Lactose is the leading ingredient.

Which doesn’t really do anything, except make lactose intolerant folks gassy.

According to Cebria‘s manufacturers (or marketing team), a main contributor of age-related memory loss is the reduction of neuropeptides in the brain. This is a reasonable claim, but doesn’t necessarily call for the supplementation of neuropeptides.

For one, dietary neuropeptides are often denatured in the GI tract before allowed the opportunity to reach the brain. And secondly, many of the “neuropeptides” referred to by Cebria’s team aren’t backed by the best science–or, really, any science at all for a few of them.

And aside from the nootropic qualities (or lack thereof) of Cebria’s neuropeptides, the neuropeptide blend is troubling for a few other reasons as well:

Reason 1: The blend is proprietary, hiding all ingredient dosages.

Reason 2: Not all ingredients are “neuropeptides” as advertised.

The leading ingredient is Lactose, the disaccharide sugar compound that does nothing for brain or bodily health and is commonly used by pharmaceutical companies as a filler for its A) compressibility, and B) low price. The fact that lactose leads the formula, thus drawing the highest dosage of the already low 445.3 mg, is a huge RED flag here–further highlighted by the fact that this is a formula geared specifically towards “age-related memory loss.”

Not to be over-cynical, but certain supplement companies have been known for screwing over older consumers with BS products & fraudulent charges.

Cebria has been accused of both–the two highest complaints being:

Unless expensive automatic shipments of B vitamin-rich milk sugar is what you’re aiming for, I’m finding it hard to recommend this supplement.

Cebria targets age-related memory loss, appealing to older men & women who would like to decrease their daily number of brain farts.

Cebria can be bought directly through the manufacturer or through various online retailers.

The evidence is piling against this product and my intuition says No.

And aside from Cebria’s effectiveness, the formula reads like pharmaceutical mumbo-jumbo and is sold like snake oil. Perhaps the product may be worth a try if you can order it through a 3rd party retailer that won’t enroll you in scammy autoshipments, but even then I can’t feign confidence that the product will be worth the money.

Nootropics that assist age-related memory loss do exist, but they’re not found in this formula.