While the origins of brewed coffee remain mysterious & contentious, the drink’s introduction to the European mainland was met with suspicion, then religious prejudice as the Catholics shunned coffee as “the bitter invention of Satan.”

Satanic or not, the drink clearly took off, as evidenced by the Starbucks on every other street corner in every major & minor city.

Yet, while the Catholics & the rest of the world fully gave in to the caffeinated drink, there remains an obtuse, Puritanical group that refuses its temptation. I’m talking, of course, about the devout nootropic brain hackers — many of whom consider caffeine a “smart” drug for the plebs, the false K-Mart brand of cognitive enhancement.

And dammit …they’re right …kind of …but not really …but kind of.

TL/DNR: True Dr. Giurgean-style nootropic purists don’t view caffeine as a legitimate nootropic, despite its self-evident and reliable cognitive enhancement abilities. The reason for this: caffeine doesn’t nourish the brain as effective nootropics do. It only stimulates cognition… and, well, maybe it also does have some structural brain benefits as well. Which is, admittedly, pretty awesome, and the reason why I thank bejesus everyday for caffeine.

How Caffeine Is Supposed to Work

Let’s count up the world’s population for a moment.

Altogether, we’re looking at 7.5 billion people, give or take however many thousands.

This means that if we chop off 10% of that number, then 6.75 billion people consume caffeine in one way or another, whereas 80% of the world’s adult population consume caffeine daily. Which thus begs the question:

Why is the nootropic geek reviewing caffeine??

If I give caffeine a negative review, does that mean 6.75 billion will stop consuming it? Am I arrogant enough to think that 6.75 billion people even read my articles?

The respective answers to both of those are No and Yes.

Regardless, it’s a compound worth reviewing, stemming from a question worth considering — at least by the nootropic community — that question being: Should I include caffeine in my nootropic stack? After all, there’s a reason so many people consume this drug: it’s one of the few natural substances that enhances cognition & mental energy with such reliable potency.

Personally, I don’t view caffeine as a bona fide nootropic — though, no doubt, caffeine does have impressive cognitive benefits, even structural brain benefits. Even so, returning readers of this website will be familiar with my stance on caffeine, as expressed in my reviews on products that rely on it.

But before I explain my views, let’s check out how the compound works. Researchers believe caffeine operates by:

The body is really effective in starting itself up and shutting itself down. One of these key self-regulatory feedback loops in the body is the adenosine pathway, which tells the body to calm the hell down when it’s amped the eff up through adenosine, a byproduct of neuronal communication that builds up in the brain, binding to brain receptors to settle nervous activity. Caffeine prevents the binding by fitting very neatly into the adenosine receptors, preventing adenosine’s “settling” from occurring for a sustained, caffeinated alertness.

Perhaps one of the questionably alarming effects of caffeine is its increased signalling for “fight-or-flight” stress hormone (e.g., cortisol) release from the adrenal glands. Similar to true fight-or-flight conditions, this stimulation temporarily boosts attention, focus, reaction time, energy, strength, & endurance. The reason this might be alarming is due to the inactive states that many habitual coffee drinkers are in while engaging this “stressful” pathway, which, as Robert Sapolsky pointed out, isn’t a pathway you want to habitually activate if you’re frequently inactive.

Caffeine shares this biomechanism with smart drugs & wake-promoting agents such as Adderall, Adrafinil, etc.: The enhancement of dopamine signalling in the brain. Caffeine does this by antagonizing adenosine A2A receptors — however, caffeine-induced increases in dopamine receptor availability, and thus increases in dopamine reward-arousal, seem to require larger-than-usual acute caffeine intake (300 mg p.o.). 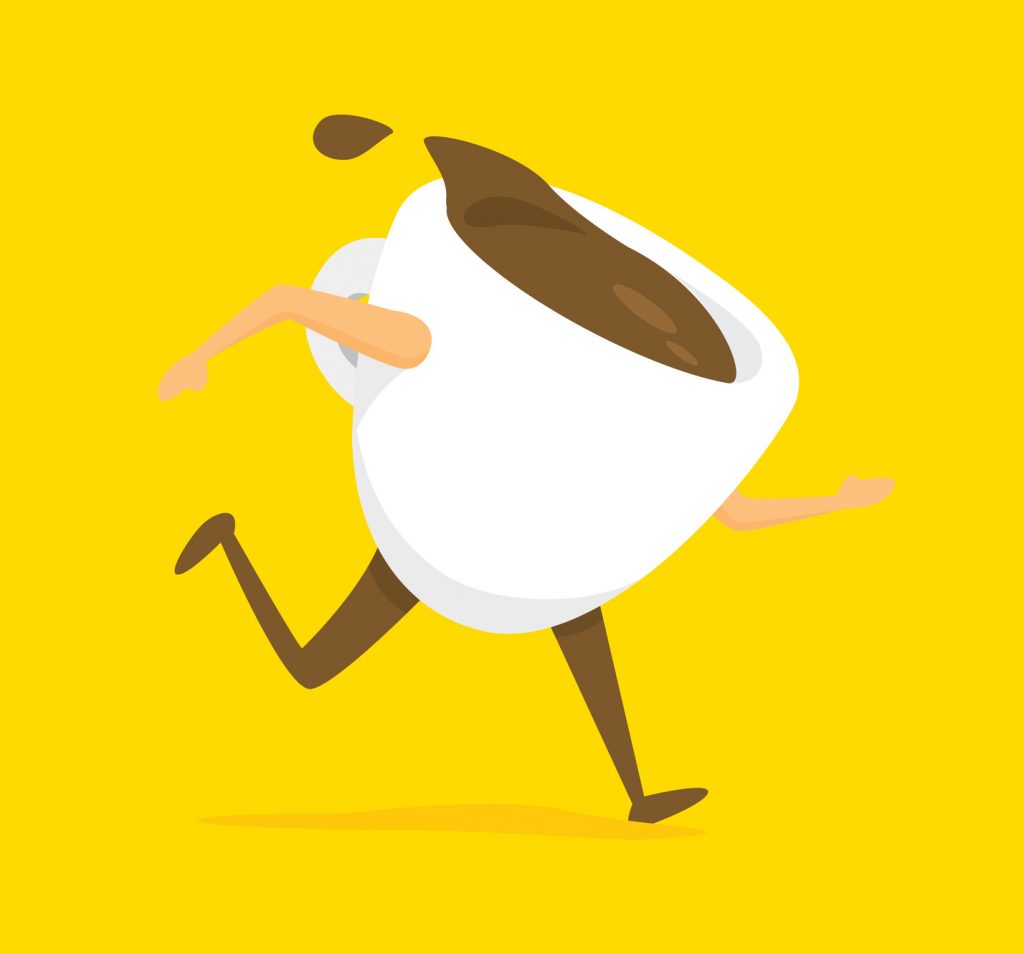 Mental stimulation & feel-goods. Those are the two primary benefits of supplementing caffeine, and the reasons why nearly every supplement these days — from nootropics to fat burners to some testosterone boosters — includes the stuff: caffeine feels good, and consumers tend to return to products that make them feel good.

That sounds unnecessarily cynical …but it’s true: Many manufacturers practice what’s called “Fairy Dusting” which is essentially loading a proprietary formula with a hefty amount of caffeine, then sprinkling (fairy dusting) in small amounts of actually effective ingredients to give the appearance of well-rounded product — when in reality all you’re getting is caffeine.

It’s cheap, providing clear-cut cognitive benefits that feel good and that are easily (mis)attributable to the other ingredients listed in a supplement. For traditional coffee, tea, soda, etc. drinkers, this is fine, they know what they’re getting into. But in the world of manufactured nootropic products, the benefits of caffeine are shady.

While various caffeine studies have demonstrated positive effects on quicker thinking, reaction times, mental processing, etc., the drug has also demonstrated significant impairments on cognition, namely when consumed in excess or by caffeine-sensitive individuals. Such side effects include:

In short-term, temporary instances, these bio-effects may serve positive outcomes, e.g., vasoconstriction easing a headache — however, heavy, long-term users may more often experience the negative end of these side effects.

In a comparison study on the adenosine receptor antagonistic effects of quercetin & caffeine, 57 volunteers received either 2000 mg quercetin or 200 mg caffeine (or placebo), then were administered a visual vigilance task one hour later. A Profile of Mood States questionnaire was also completed before treatment and immediately after the task test, after which the researchers found caffeine to improve detection of visual stimuli & reduce reaction time as well as increase positive subjective measures of fatigue, vigor, & mood. The conclusion: “Quercetin is unlikely to have any effects when consumed by humans in quantities present in the diet or in dietary supplements. Caffeine (200 mg) administration resulted in the expected effects on vigilance and mood.”

With caffeine’s focus-enhancing effects already well-established, the researchers of this placebo-controlled study aimed to discover caffeine’s benefits for memory, especially as compared to napping, which has been associated with increased alertness & learning on memory tasks. Participants were divided into either a 200 mg caffeine group, a 60-90 min. napping group, or placebo, and were each administered testing on three distinct memory processes: declarative verbal memory, procedural motor skills, and perceptual learning. By the study’s end, the researchers found caffeine significantly impaired motor learning as compared to naps & placebo, leading to the conclusion: “These findings provide limited benefits of caffeine for memory improvement compared with napping. We hypothesize that impairment from caffeine may be restricted to tasks that contain explicit information; whereas strictly implicit learning is less compromised.”

In this review of double-blind, placebo-controlled trials published between 1993 – 2008, 41 human studies were compiled & evaluated to determine what range of caffeine consumption maximizes benefits with minimal side effect risk, measuring benefits/risks in terms of cognitive function, mood, physical performance, & hydration. Most studies reported benefits with low to moderate caffeine usage (37.5 to 450 mg daily), while some studies indicated no events of dehydration — even in exercising participants — with daily caffeine intakes up to 400 mg. The researchers concluded that “the range of caffeine intake that appeared to maximise benefit and minimise risk is 38 to 400 mg per day, equating to 1 to 8 cups of tea per day, or 0.3 to 4 cups of brewed coffee per day.”

How to Take Caffeine

My Experience with Caffeine

Do as I say, not as I do: I think it’s smart for most people to reduce their caffeine intake, considering how many people likely consume way too much of the stuff …And, yet, I’m a big-time habitual coffee drinker.

To my credit, I consume caffeine the nootropic way, i.e., the only way: w/ L-theanine — of all the classic nootropic stacks available (e.g., piracetam + choline, centrophenoxine + uridine), I find the caffeine + L-theanine stack the most reliable in terms of quick, noticeable boosts on cognition.

Though if you really want to take it to the next level, try also adding L-tyrosine, B-vitamins, and Rhodiola rosea extract to your coffee for a real healthy energy rush.

Since starting this intermittent fasting routine, I’ve found the coffee + L-theanine a must, as I tend to experience the jitters more readily on an empty stomach — and L-theanine, of course, helps reduce this side effect for a cleaner caffeinated experience. I also drink pots of green tea at a time, leading me to kind of almost worry about my L-theanine intake (after all, I mix upwards of 400 mg L-theanine with my coffee), but I’m afraid I’m at the point of no return: straight “vanilla” caffeine simply doesn’t feel good anymore w/o L-theanine.

So my advice: If you have to use caffeine (and, frankly, you don’t have to), stack it with L-theanine. And if you don’t use caffeine, screw it: take L-theanine anyways… as well as the L-tyrosine, B-vitamins, and Rhodiola rosea… and, oh sure, why not toss in a little lion’s mane mushroom, too, while we’re at it. 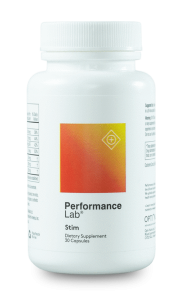 Like the phrase “brain health supplement,” the term “caffeine pill” has somewhat of a negative connotation due to how overwhelmingly bad most “caffeine pill” type supplements are. With Performance Lab Stim, however, this stack redeems the name — at least for me — as it supplies exactly what you need to get the most out of your caffeine rush without the subsequent caffeine comedown and crash.

Combining a brain-healthy mix of natural caffeine, L-theanine (as premium Suntheanine®), L-tyrosine, and a B-vitamin complex, Performance Lab Stim smoothly elevates cognitive focus and energy while counterbalancing the catecholamine-draining side effects of caffeine’s stimulatory benefits. Really, if you’re looking for a scalable capsulated caffeine stack, one that you can mix as-needed with your daily nootropic supplements, you can’t do much better than Performance Lab Stim, which I take almost daily either first thing in the morning or before hitting the gym.

Want some? Get the Best Deal on Performance Lab Stim here.

Is Caffeine a Good Nootropic?

My experience says yes. My standards say no.

Or more specifically they say: Caffeine is not a true nootropic.

And this comes with great irony because caffeine is the most popular cognitive enhancing psychostimulant in the world, consumed by seemingly everyone over the age of seven. However, for the ultimate nootropic goal of hacking & optimizing brain function aaaand structure, caffeine doesn’t quite fit the bill. And, in reality, I’d say brain function & structure actually improve under caffeine abstinence.

Not to say that mature & self-aware caffeine users can’t supplement the stuff in a truly nootropic fashion. It’s just that most of us can’t.