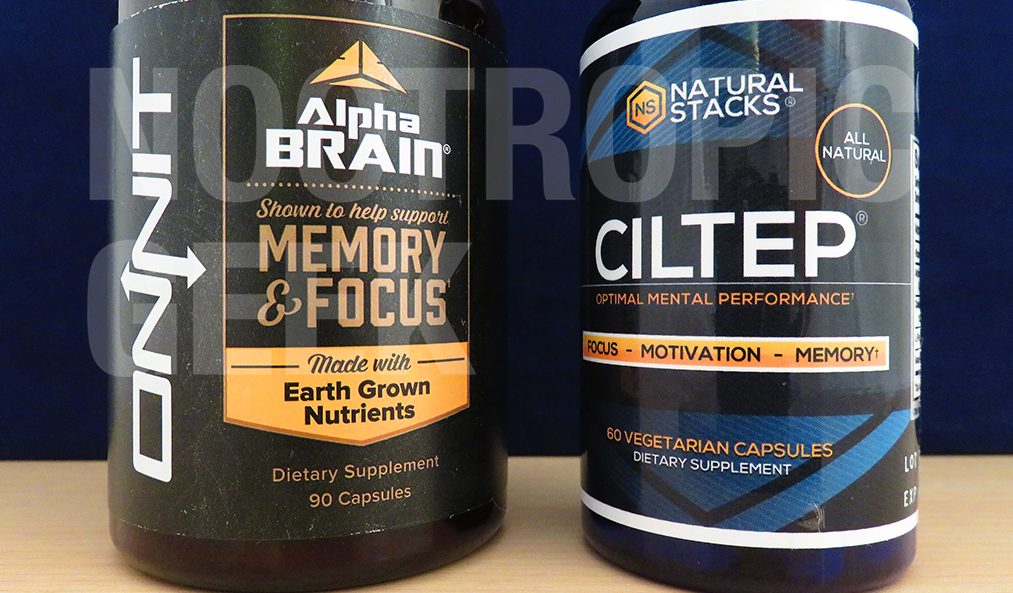 The Geek is competitive. The Geek wants to WIN.

So of course, I am interested in any kind of competetive advantage that I can gain over my opponent.

That’s why I decided to review Onnit Labs’ Alpha Brain and Natural Stacks’ CILTEP together.

Both of these nootropic stack supplements position themselves as brain-boosters for ambitious, competitive, performance-driven people who want to excel every day.

So what happens when two competitive formulas face off in an actual competition? Read my review and find out!

It is a little challenging to compare/contrast formula strategies with Alpha Brain and CILTEP.

Both of these nootropic stacks seem to target the same demographics, with each boasting a list of user endorsements that includes professional athletes, stuntmen, bodybuilders, competitive gamers and adrenaline junkies.

But even though they seem to be made for the same kind of users, Alpha Brain and CILTEP have completely different philosophies on how to boost brainpower:

Onnit Labs Alpha Brain is driven by Alpha brainwave support that is intended to bring about a state of calm mental clarity. But Alpha Brain goes beyond that pathway with ingredients that support neurotransmitters, brain-building, mental energy, and more… with a wildcard ingredient thrown in (AC-11) that does who-the-heck-knows.

The end result is a “Flow State” that is claimed to be good for verbal ability, concentration, motivation, etc. — a set of benefits that seem to be good for productivity & performance.

Natural Stacks CILTEP has a narrower focus than Alpha Brain: It is laser-focused on boosting brain chemicals and promoting “secondary messaging” Long Term Potentiation (LTP); a state of peak cell-to-cell neural communication that is energized, active and long-lasting.

It all adds up to formula that is designed to achieve their tagline of “Motivation. Concentration. Memory.” CILTEP makes additional claims for mood and sociability.

Let’s take a look at some of the other formula features that make Alpha Brain and CILTEP different:

CILTEP gets the edge here, and there are a few reasons why. First off, CILTEP shows all of their dosages, whereas Alpha Brain does not.

Now, Alpha Brain does show dosage for their AC-11 and Vitamin B6. And, since Alpha Brain splits its other ingredients into THREE proprietary blends, we can better guesstimate the nootropic ingredient dosages in each one.

But The Geek doesn’t want to “guesstimate.” God dammit.

So I like that CILTEP shows all dosages, and give them an advantage in quality perception as a result. It looks like CILTEP might get the nod in actual quality too, beyond just the look of its label.

CILTEP also uses artichoke standardized to 5% total caffeoylquinic acids and Coleus standardized for 20% forskolin. This is important because it guarantees active nootropic compounds are present in the herbs.

What Alpha Brain has really got going for it in the quality department is AC-11® Cat’s Claw. It’s a premium branded ingredient, backed by patents and some clinical research. CILTEP has no such branded ingredient.

Both CILTEP and Alpha Brain have mostly clean-looking labels; both are vegetarian and free of useless additives, synthetic colors, etc.

However, if you’re avoiding soy, be advised that Alpha Brain’s Alpha-GPC is derived from soy. That could be a “dirty” label for some people.

Alpha Brain or CILTEP: Which is Better?

Both of these nootropic supplements require a leap of faith.

Alpha Brain has a lot resting on its AC-11 cat’s claw extract, but believe me, it’s not NEARLY as evidence-backed as they would have you believe. But that’s just one ingredient, and Alpha Brain smartly hedges its bets with several other nootropics that have a lot more scientific validation.

CILTEP has many more of its eggs in one basket because its main brain-boosting strategy — Long Term Potentiation — is unique in nootropic stacks (at least that I’ve seen). In other words, CILTEP’s brain strategy is theoretical.

CILTEP is better for brain chemicals.

I like CILTEP’s LTP strategy; it makes sense as a novel way to boost dopamine & acetylcholine. CILTEP also improves neurotransmitters with L-Phenylalanine, ALCAR & B6 (as P5P). These supply raw materials for brain chemicals, because LTP will burn through those faster as it increases focus and concentration.

It’s frustrating to not see their dosages, but what we DO see is that Alpha Brain has some of the greatest nootropic ingredients. I especially like its L-Tyrosine, L-Theanine, Phosphatidylserine, and Bacopa. Like CILTEP, Alpha Brain supports production of brain chemicals for brainpower… But Alpha Brain does a lot more, too.

CILTEP does 1 thing, but it does it very well: Brain chemicals. It is laser-focused, but limited; for example, I can’t believe there’s no choline-class brain-builders in CILTEP.

Alpha Brain addresses many aspects of mental performance… but not TOO much. It has 3 main areas — focus, flow, and fuel — which makes me more confident they are not spreading themselves too thin.

With theoretical nootropic stacks like these, you really gotta give ’em a try and see if they work for you. But based on labels alone, one simply has more evidence-backed nootropics that work more reliably for brainpower. Therefore, I do declare…