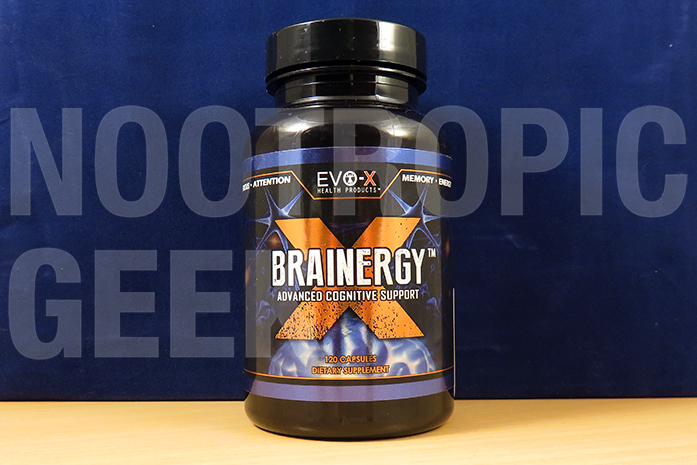 One of my favorite alibis as an online gamer:

“This lag is killing me!”

The problem with this is that, despite saving face among a bunch of faceless players (who know you’re lying), you’re still not having fun. Plus, if you’re health conscious, then you won’t go for the energy drink that may help your gameplay.

So what do you do?

You go for EVO-X Brainergy. The energy drink replacement of this review.

Serving Size: 2 Capsules
Servings Per Container: 60
Other Ingredients: Veggie Capsule, Microcrystalline Cellulose, Nuflow® Rice Bran Extract
Directions: Take up to 2 capsules every 6 hours or as directed by a healthcare professional. 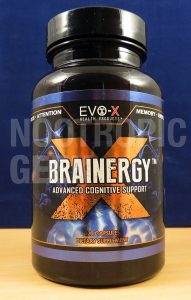 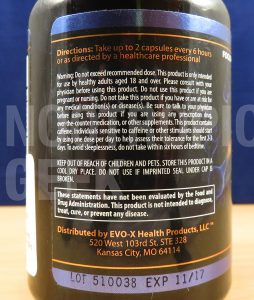 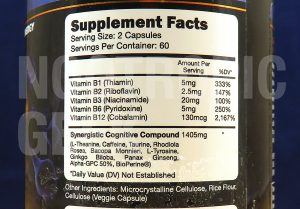 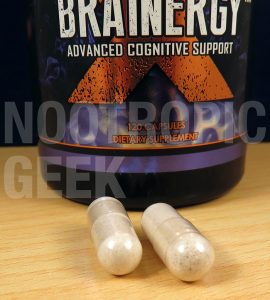 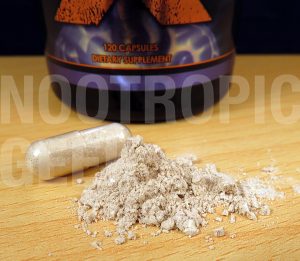 Check it out: Above 100% DV for all of the B vitamins. Things were looking pretty good there, EVO-X Brainergy, but then you hit me with a proprietary blend… What am I going to do with you?

Let’s see how these ingredients stack up:

Deficiency in any B vitamin can cause serious disruption in the nervous system. Because of this, many nootropic aficionados claim that a quality B vitamin complex is the first place to start for securing brain health. I can stand by that sentiment, despite that deficiency in most of these vitamins is rare.

At the least, they’re safe, have decent mood boosting benefits, and may help potentiate the bio-actions of other nootropics. However, the best nootropic B vitamins are:

Vitamin B6 – Presented here in cheap-o Pyridoxine HCl form (P-5-P is better), B6 is the only true nootropic B vitamin for its demonstrated cognition & mood boosts. More on Vitamin B6.

Vitamin B12 – Presented here in cheap-o Cyanocobalamin (Methylcobalamin is better), B12 is not a true nootropic, but it is solid for elderly brain health. More on Vitamin B12.

L-Theanine – Time-tested green tea compound known for its “relaxing wakefulness” effects on cognition. Perfect complementary compound for the next ingredient. More on L-Theanine.

Caffeine – Have you ever heard of this? Caffeine is not a nootropic, but a popular mental stimulant best taken with L-Theanine to mellow out the caffeinated jitters.

L-Taurine – Straight bull semen… Okay, not really (what a weird rumor), but rather a notable sedative with significant anti-anxiety effects. May further help L-Theanine’s “relaxing wakefulness” here. More on Taurine.

Bacopa Monnieri – Powerful Ayurvedic herb (that’s also adaptogenic), also known as the “Student’s Herb” (by me) for its benefits on learning & memory. This is a nootropic that requires long-term supplement to achieve full effect. More on Bacopa Monnieri.

L-Tyrosine – This compound is directly linked to stress as it gets burned by the brain to keep up with stressful, demanding situations. Supplementing L-Tyrosine during stressful conditions may help alleviate the mind-drain, sustaining mental power & cognition. More on L-Tyrosine.

Ginkgo Biloba – Not just for old folks no more! Ginkgo’s circulation effects were traditionally valued in elderly health nutrition, but the plant’s bio-benefits on memory & attention seem to benefit men & women of all ages. More on Ginkgo Biloba.

Piperine – Substance in black pepper that has been shown to enhance nutrient absorption, in effect increasing the overall bio-availability of this formula.

This is the proclaimed intent of EVO-X Brainergy: To replace energy drinks.

Typically, I squint my eyes and a cast a sideways glance at such claims, and initially I did these things when reading EVO-X Brainergy’s product description. But when I took a look at the supplement facts, and saw energy drink favorites B vitamins, Caffeine, Taurine, & L-Tyrosine, I unsquinted my eyes, repositioned my glance in straightforward fashion, and realized that:

Energy drinks are essentially Satan in the pagan world of nootropics, but they do have, believe it or not, brain healthy ingredients in them–practically all of which are found in this stack. They are the aforementioned B vitamins, Taurine, & L-Tyrosine. Caffeine I don’t necessarily consider as “healthy” nor as a nootropic, but I’ll accept it here as EVO-X Brainergy makes for a much healthier caffeine source than energy drinks.

What’s most impressive about this formula is that it doesn’t stop with energy drink ingredients. It also throws in a hefty amount of cognitive enhancing nootropics that support both brain health & function. In fact, there’s nothing in this formula that gives me reason to squint my eyes & cast a sideways glance. Everything here has a purpose. Nothing raises any question marks or RED flags.

On the whole, the EVO-X Brainergy experience looks like one of energized focus & creativity with the potential to aid memory & learning for the long-run.

However, considering the popularity of energy drinks among gamers, I suppose the real test would be Does EVO-X Brainergy enhance my Rainbow 6: Siege performance? If the answer is yes, then you have yourself a mighty fine mental booster on your hands.

I have nothing to back this claim on, but I’m going to say gamers. At least, it’s my gamer side that’s frothing a little at the mouth for EVO-X Brainergy–although, my professional “working” side also likes the look of this nootropic as an entry-level “caffeinated” nootropic stack.

Yes, EVO-X Brainergy works, depending on the allocation of milligrams underneath that annoying prop blend label. At worst, EVO-X Brainergy is an overglorified B Vitamin + Caffeine stack–however, I doubt that this is the case. For the most part, there’s enough milligrams to cover most of the ingredients; although, I have little confidence in that lowly prioritized Alpha GPC.

Even knowing what we know now about energy drinks, they’re still massively popular.

I like to think that this is largely due to two reasons:

Many alternatives themselves seem to just replace one unhealthy vice with another. Thankfully, EVO-X Brainergy seems to break this trend by providing healthy energy drink ingredients in addition to healthy nootropics.

Honestly, it’s a good thing we’re ending this review here, because the more I think about this stack, the better it sounds.

I don’t want to freak you out by Geeking out.