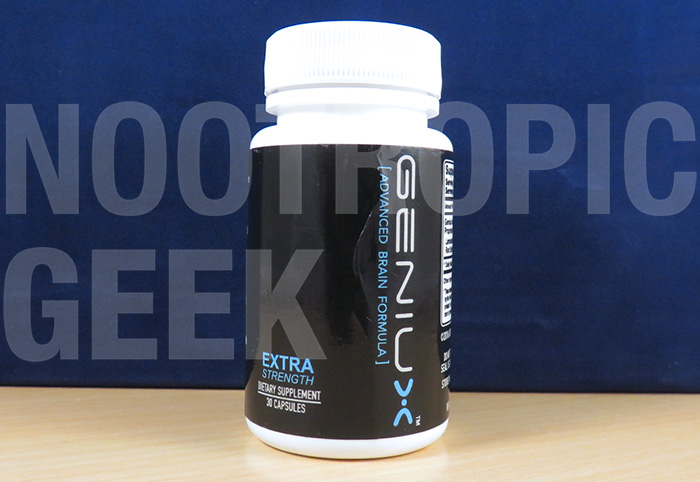 Geniux is an oddly familiar and popular nootropic brand name, despite delivering what’s a pretty meager ineffective formula. Sure, it has caffeine which is remarkably “effective” in a sense. But, typically, when we’re looking to elevate our brain health and performance, we’re looking for something more than caffeine. And Geniux does offer a little more, but it’s, unfortunately, not enough and nowhere near comparable to the best nootropic stacks:

No one works harder than the bee.

And word on the street*, this may be partly due to the bee brain’s conditional ability to resist the effects of cognitive aging common to most, if not all, animal species (*by “street” I mean this study). Thus it would make sense to tap into bee pollen as a potential brain health nutrient. After all, it wouldn’t be the first time we’ve tried harnessing genius bestial powers from the byproduct of a beast (SEE: Ray Lewis & Deer Antler Velvet).

What doesn’t make sense is outright labelling bee pollen as a “potent Nootropic.”

Who is doing that? you ask.

Geniux is doing that, I respond. 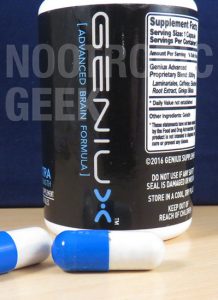 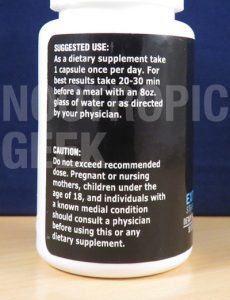 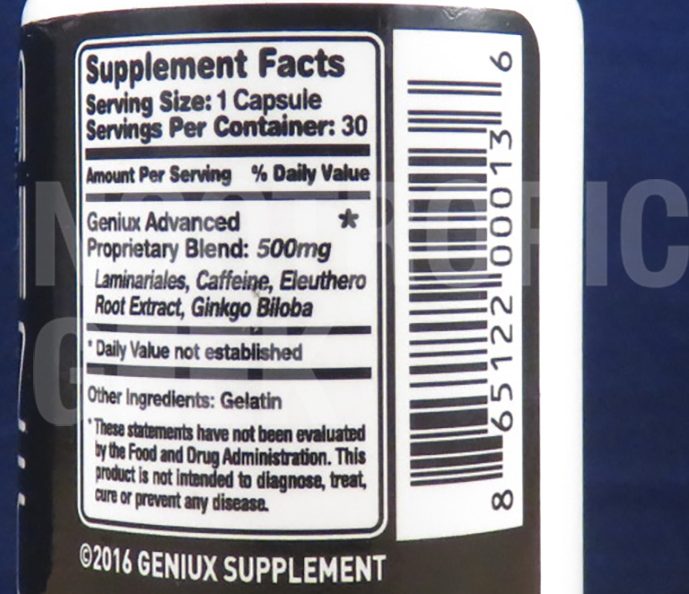 Geniux disappoints on the “smart pill” appeal it sells itself on, but impresses with its unique, all-natural formula. Bee pollen? Groovy. Does it work?

Bee Pollen – The leading ingredient in this blend is interesting for its antioxidant, anti-inflammatory, immune-enhancing benefits–the sum of which may boost brain health. Yet given the wide species-specific diversity of bee pollen, it’s difficult to pinpoint the exact nature of Geniux’s pollen.

Caffeine – Have you ever heard of Caffeine? It’s… how do I explain this… Caffeine is, like, this stuff found in coffee & tea & cocoa that makes you, like, feel good. Energized. It’s a cheap stimulant, not a nootropic. More on Caffeine.

Eleuthero Root Extract – Commonly referred to as Ginseng, despite not being a true ginseng plant, Eleuthero is classified as an adaptogen, a category of herbs that help combat stress for general health. However, Eleuthero is relatively under-researched compared to other adaptogens.

The official title of this product: Geniux Limitless Pill.

So, what we seem to be dealing with here is another nootropic stack that has latched onto the Limitless “genius” phenomena that was all the rage in 2011 and continues to make waves in supplement marketing to this day.

I get it: Bradley Cooper is a hunk. That’s undeniable. 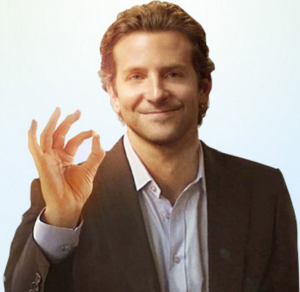 But the shameless association with Limitless has somewhat formed itself into a RED flag, considering that most “Limitless pills” on the market are bunk products. Geniux Limitless Pill teeters on the edge of bunkness with its proprietary blend nonsense & heavy reliance on bee pollen–which might possibly maybe help brain health, but doesn’t offer any nootropic advantages. Caffeine, on the other hand, does provide notable cognitive stimulation, the type of stimulation that, if you didn’t know caffeine was in the formula, you would mistake for actual nootropic activity.

Yet, Geniux refrains from diving full bore into bunkness by including Eleuthero, which provides additional brain health support to bee pollen’s antioxidant, anti-inflammation, immune-enhancement bio-actions. In particular, one of the benefits advertised by Geniux’s manufacturers is that “the product helps a user stay calm, happy and relaxed by relieving them of stress.” This claim is earned by Eleuthero’s adaptogenic properties.

However, the other claimed benefits:

Aside from the “energy” claim, these benefits are not earned. Especially when you consider the implications of “brain reaction.”

Which could mean just about anything.

The “#1 rated All Natural Limitless Pill supplement” description would have you thinking everyone is taking Geniux, but the only customers I see returning to Geniux do it simply for the caffeinated feel-goods.

Does a cup of coffee work?

If you said “Yes!!” to that, then yes, Geniux will at least feel like it’s working… but as far as nootropics go, this is a very weak entry in the nootropic market.

Even so, Geniux is a far cry from the best caffeine pill. Instead I recommend perusing through the following list: BEST NOOTROPICS FOR ENERGY.