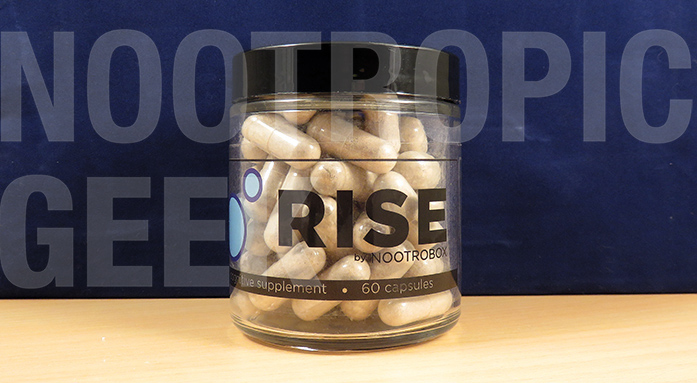 But now what are all of the Bay Area professionals taking? Apparently Nootrobox–as well as other sleekly designed “smart drugs.” Except unlike typical stimulant smart drugs (e.g. Adderall, Ritalin), Nootrobox isn’t a drug at all. In fact, it’s 100% safe, & (believe it or not) good for you.

Like any sane warm-blooded individual living on a healthy degree of self-preservation, I approach any Silicon Valley substance with a substantial length of caution. So, from a few arms’ distance away, let’s take a look at this nootropic.

Serving Size: 2 capsules RISE; 1 capsule SPRINT
Servings Per Container: 30 servings RISE; 60 servings SPRINT
Other Ingredients: RISE is contained within a vegetable cellulose capsule, which is vegan and flavorless. RISE contains soy. SPRINT is contained within a vegetable cellulose capsule, which is vegan, flavorless, and allergen-free.
Directions: RISE – Swallow two capsules daily, with water. Take RISE at a consistent time to establish a routine. Best results are found when taken with food – the ingredients are best absorbed when digested with fat (e.g. eggs, nuts, fish oil). Because the effects of the ingredients in RISE compound when taken habitually, RISE should be taken on a daily basis. Over consistent supplementation, one may begin seeing increased memory, stamina and efficiency in cognitive tasks within 2-12 weeks. SPRINT – We recommend taking one or two capsules as needed, to increase alertness and focus. Two capsules of SPRINT MK. III is equivalent to one cup of coffee’s worth of caffeine (100 mg). Do not take more than eight in a day. SPRINT takes effect immediately (within about 30 minutes) and is effective for four to six hours. Use instead of coffee or an energy drink for intense focus & productivity. SPRINT works best when taken in an environment conducive to getting work done. 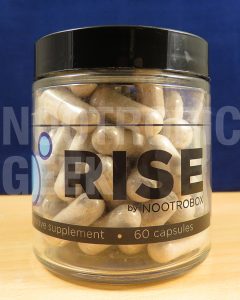 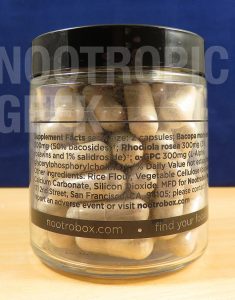 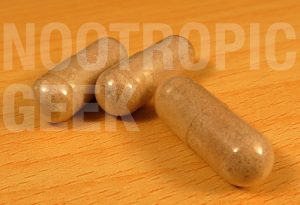 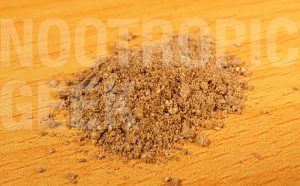 Other Nootrobox products include YAWN, for healthy sleep, and KADO-3, for omega-3 fueled brain support, but I’m only covering RISE + SPRINT, the two most nootropic-targeted Nootrobox formulas in the 4-formula stack. Each are unique enough that two reviews would have been warranted, but considering how well these supplements stack together, I’m condensing them into one review.

B Vitamins – Two hefty doses of two notable nootropic vitamins. B6 has been shown to aid mood & cognitive function, while B12 manages the general health of neurons. More on B6

L-Theanine + Caffeine – I’m lumping these two together for their complementary roles on cognition. Naturally found in green tea, this duo is known for increasing energy & alertness (via Caffeine) while minimizing any excess stimulation with L-Theanine’s wakeful relaxation benefits. The result: Caffeinated creative flow-state. More on L-Theanine.

Discounting the YAWN & KADO-3 nootropics, Nootrobox is quite literally your “get-up & go” nootropic product in its Step-1-Step-2 double-formula design:

Yet, despite the implication of its name, RISE isn’t necessarily a “morning” nootropic. The directions advise mixing the stack with “fatty” foods (e.g. eggs, nuts, fish oil), thus making breakfast the most convenient choice–considering that you’ll want RISE’s benefits earlier in the day rather than later… Buuut… Yes, there’s a “but”:

Bacopa Monnieri, in particular, is notorious for “not working” due to its users ditching the herb after a few days of supplementation to no effect. Ditching Bacopa after a few days would be a poor choice, young grasshopper. Because Bacopa’s adaptogenic memory benefits are well worth the wait–especially when compounded with Rhodiola’s anti-stress effects & Alpha-GPC’s pro-memory action.

The trick to RISE is patience. Patience, grasshopper. For at least 2 – 12 weeks–a frustratingly broad time-table I realize, especially if you end up falling closer to the 12 week end of the spectrum. But worth it.

With that in mind, SPRINT seems more suitable for helping you ‘rise’ in the morning, but I’d recommend adhering to the Nootrobox recommendation of saving a SPRINT serving until you’re “in an environment conducive to to getting work done.”

Nootrobox claims 4 to 6 hours worth of SPRINT benefits per serving, so, ideally, one dose to start the work/school shift & one dose to continue after lunch should have you cruising through the environmentally work-conducive day, easy breezy.

Nootrobox appears to be only available directly from the Nootrobox website.

Nootrobox users may feel dismayed from the long wait period on RISE.

Others may ditch the effort entirely, viewing the “2 – 12 weeks” as a cop out.

After all, even if the formula doesn’t work, then 12 weeks is an expensive long time and a major profit on behalf of Nootrobox, right? Completely understandable. I have similar reservations… Yet, the ingredients used in both RISE & SPRINT aren’t only research-backed, but they’re time-tested: Green Tea, Bacopa, & Rhodiola dating back to the early, early AD centuries of nootropic usage (thousands of years before the concept of nootropism was… well, conceptualized).

So the question isn’t do these ingredients work (they most certainly do), but do these particular extracts work?

Yes. RISE + SPRINT will have you not only awake & moving around, but also cognitively sharpened for the long run. And if you need any convincing, consider what you’re spending on coffee and compare that to the prices here.

For this propellerhead geek, it’s a done deal.