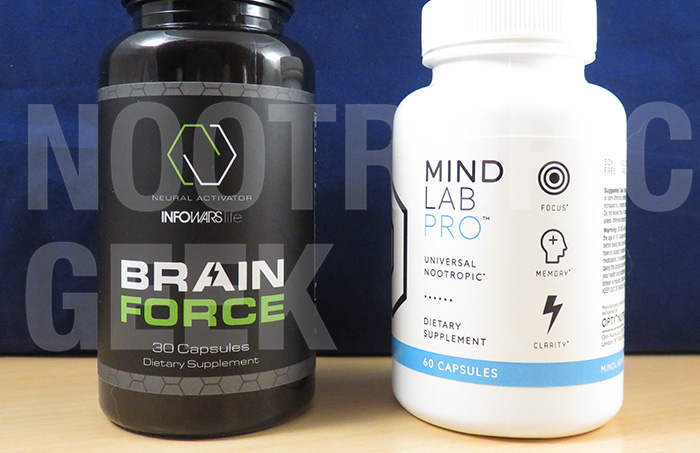 I just can’t hold back the truth any longer.

That’s right: You’re the alien. According to Alex Jones, the search for aliens is already over. Because we are the aliens. We are not of this planet. And perhaps by elevating our brains to a higher state we can learn where we came from.

Where we are going.

But which nootropic stack is going to be the one to lead us into the future: Brain Force or Mind Lab Pro? The world holds its breath…

Yet, their designs aren’t entirely different as over half of their formulas are sharing ingredients. You wouldn’t know it from their marketing, but Brain Force & MLP have more in common than they do differences. But it’s the differences that make all.. the… difference.

If you haven’t heard, the global elites are leaking chemicals into your food & water, poisoning your brains, turning your children gay! And Infowars conspiracy theorist Alex Jones has the antidote: Brain Force (and Brain Force Plus)–a nootropic stack designed to combat the “toxic weapons” of the government & global elites… and, conspiratorial sentiments aside, it actually makes for a solid, brain healthy supplement!

If Brain Force can be summed up in two words, Mind Lab Pro requires six:

These are the six biopathways covered by Mind Lab Pro’s diverse range of ingredients, which counts up to 11 over Brain Force’s 10. Not that this is a significant difference. The biggest difference between Mind Lab Pro’s ingredient selection is that they’re all nootropic, whereas Brain Force sneaks in a non-nootropic supply of stimulation (caffeine, theobromine). As such, Mind Lab Pro works for everyone (hence “Universal Nootropic”), unless your brain pathways are already optimized, in which case how about you tell me your secrets. Read my in-depth review on Mind Lab Pro.

There are six shared ingredients between these formulas: B6, B12, Bacopa, Phosphatidylserine, L-Theanine, & Vinpocetine. All nootropics, so that’s good on both products. Yet, there’s a lopside of difference in ingredient forms & quality between the formulas, resulting in the following list of unique features:

Review the previous section one more time. Count up the list items underneath Brain Force then compare that to Mind Lab Pro‘s count. That essentially sums up the difference in Potency & Quality between these supplements.

The disparity would be even more lopsided towards MLP’s side if I chose to include MLP’s Bacopa extract. The only reason I didn’t is because Brain Force also supplies Bacopa extract, and although they don’t list the exact standard, I’ll give them the benefit of the doubt, because I’m, like, a nice guy or something. (However, for the record, Brain Force should be shooting for MLP’s quality of Bacopa.)

Relative to Mind Lab Pro, Brain Force isn’t looking too hot here. When it comes to potency & quality, MLP is essentially unmatched. It earns an A+.

But independently, Brain Force isn’t bad. Bacopa is in extract form. B12 is methylcobalamin (no cyanide). L-Theanine, Vinpocetine, & Huperzine A are all in their standard forms. Really, the only big complaint is that Brain Force’s PS is soy-derived, not sunflower-derived.

Brain Force earns a B. Maybe B-.

Strange that it’s more expensive than Mind Lab Pro, though:

Brain Force or Mind Lab Pro: Which is better?

Brain Force is not a conspiracy.

It’s the real deal, covering the two primary benefits of a nootropic supplement: Memory & Focus–albeit stimulated focus. If you want to get the most bang for your buck, go with Brain Force Plus. It’s the same cost as the original formula, except with more servings; plus it swaps out Vinpocetine for BioPerine, a nutrient enhancing black pepper extract.

In my Best Nootropic Supplements of 2019, I actually argue* that it’s the realest deal (*I don’t argue. I simply state. Don’t you dare argue with me). If there’s a supplement that’s realer than Mind Lab Pro, I haven’t seen it yet. This stack is simply the best nootropic stack on the market, not only for its well-selected ingredients but for their consistently high quality. And it accomplishes its brain boosts without the aid of caffeine, which is a minor miracle in this uppity-ass day & age.

Brain Force may very well be the ultimate threat to the “global elites.” But it’s not enough to take down the elite nootropic stack Mind Lab Pro.

But this isn’t because Brain Force is a bad product. It’s pretty damn good, and actually fairs pretty well in these comparative reviews. The customer reviews speak highly of this stack as well.

However, I’m not just any customer. I’m the Nootropic Geek, baby. And when it comes to nootropics, I set my standards high. And right now that standard is being set by Mind Lab Pro.