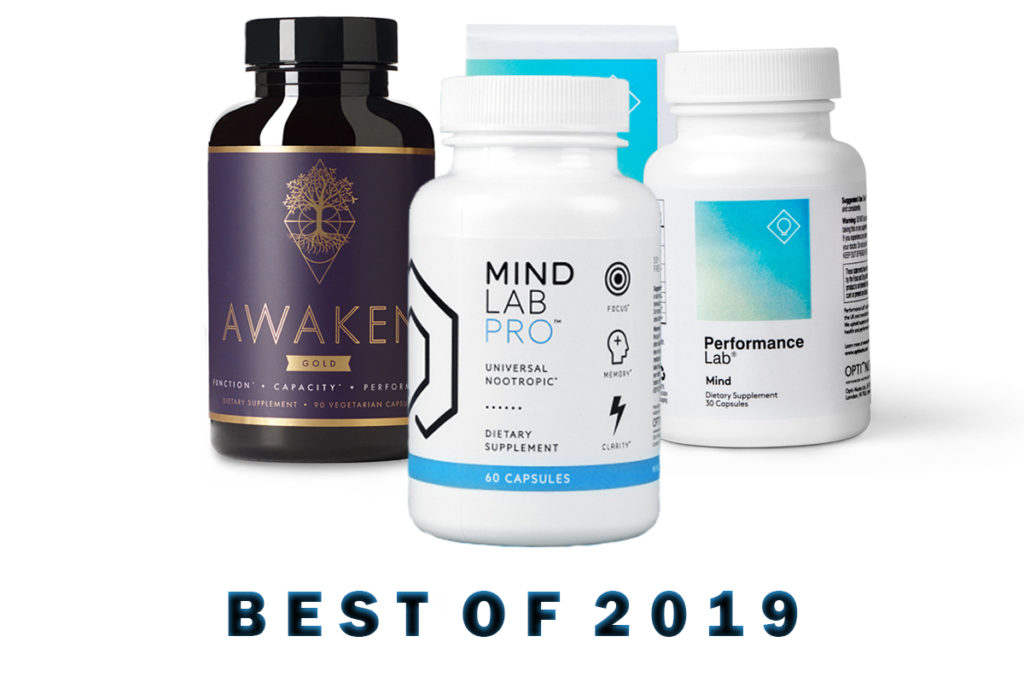 Another year has gone by and guess what that means, everybody… That’s right, you guessed it: the Nootropic Geek, the smartest geek on the internet, has become even smarter than last year, disrupting everything we thought we knew about the limits of the human mind.

And how did I do it? That’s right, you guessed it again: with nootropics, baby.

This phenomenon brings to mind Icarus and his supplementary wings that helped him achieve flight. What a wonderful story. (Admittedly, I never finished the story to the end, but I think I more or less got the gist of it.) As we enter 2019, our mental abilities to “fly” (or think better) are soaring, and to keep this momentum we’ll need only the Best Nootropic Supplements in 2019 to keep our brains afloat.

While nowhere near comprehensive, below I’ve listed a few of the best nootropics that’ll help keep your brain in top shape from now to 2020 and beyond. Enjoy!

The Best Nootropic Supplements in 2019

Okay, that last entry is a bit of cute marketing; however, Mind Lab Pro has earned it with these ingredients. Altogether, these nootropics hit the key “pressure point” areas of mental performance, ensuring that all the important cognitive cogwheels are turning, rather than blasting the brain with an overwhelming amount of stimulation or narrowly focused energy boosts.

Mind Lab Pro is an all natural, stim-free brain booster, meaning that it genuinely enhances the brain’s natural cognitive pathways without resorting to the cheap, easy rush of caffeine (which has a greater capacity to actually impair cognitive performance). Having said that, I know many of us can’t do without our morning cup of coffee. Fortunately, with Mind Lab Pro’s anxiolytic (anti-anxiety) compounds, such as L-theanine, this formula pairs well with external caffeine sources, reducing the jittery side effects of caffeine while maintaining its energy and focus benefits.

Actual, noticeable mental performance boosts without resorting to cheap-O stimulants. Many nootropic supplements are gravitating towards this cleaner form of cognition enhancement, yet none do so as well as Mind Lab Pro, thanks to the supplement’s clever diversity of nootropic bio-benefits. Everything in this formula works towards 100% Brainpower from various angles, resulting in a fully optimized nootropic stack that may work for everyone; hence the supplement’s nickname: Universal Nootropic.

Selecting clinically backed nootropics is one thing. Supplying them in their more enhanced, potent forms is another and says quite a bit about the company behind the formula. Mind Lab Pro hits all high marks across the board for its ingredient quality, as all ingredients are supplied in their most potent forms, including: BioGenesis® B Vitamins, Cognizin® Citicoline, Full Spectrum Bacopa monnieri Extract, Full Spectrum Lion’s Mane Mushroom, Sharp PS® Phosphatidylserine, N-Acetyl-L-Tyrosine, Suntheanine® L-Theanine, Rhodiola rosea Extract (std. to 3% rosavins, 1% salidroside), and Maritime Pine Bark Extract (std. to 95% proanthocyanidins).

Mind Lab Pro fits its 11-ingredient stack into these awesome Plantcaps® capsules, reducing the use of unnecessary, junky additives that might otherwise impair the formula’s efficacy. Not only that but Mind Lab Pro avoids the use of proprietary blends and other shady shenanigans that many other supplement manufacturers use to obscure the weaknesses of their product.

If I had to guess, I’d say you’re probably not really good at anything, right? Am I spot on there?

Well, that’s because your brain is lacking in four essential areas:

In other words, your brain lacks many of the proper neurochemical tools required for optimized, competitive thinking. And, fortunately, Performance Lab Mind supplies a simplified, yet richly condensed, nootropic stack that addresses each of those brain bio-pathways with a designed nootropic. Those specific nootropics being:

With these four nootropics, you’re covering the most important brain health bases for daily nootropic cognition enhancement. And what’s particularly awesome about this short stack is how well these nootropics work together towards boosting all-around mental performance. You may take only these ingredients and notice a significant improvement in your thinking over time.

Or, if you’re like me, you may enjoy stacking this short stack with other awesome short stacks, sort of puzzle-piece-style, to meet my own particular brain health needs. My approach to better brain health involves a daily base stack underlying a series of “as-needed” nootropics that I use …well, when I need them. And Performance Lab Mind fulfills the daily base end of this equation.

More with less. Performance Lab Mind is like that little guy who can squat 400+ pounds and bench over 315. With only four ingredients, Performance Lab Mind accomplishes plenty of brain boosting and building, establishing a solid cognitive base with which to add more nootropics and natural performance enhancers as you see fit — and without fear of negative ingredient interactions.

By supplying only four nootropic ingredients, Performance Lab Mind can pay additional attention to the quality and potency of those ingredients. And they do! — as demonstrated by the stack’s impressive, patented ingredients (Cognizin® and Sharp-PS®) as well as the enhanced forms of L-tyrosine (as NALT) and Maritime Pine Bark Extract (std. to 95% proanthocyanidins).

Few supplements — nootropic and otherwise — can pull of the short, sweet, simple approach to healthy performance enhancement. If you can say more with less, you’re a better writer (or speaker) than most. Ditto for nootropic brain boosters: if you can accomplish more cognition enhancement with fewer ingredients, then hell yes — you’re doing it right.

And what’s particularly cool about this simple brain booster is how easy it is to stack with other nootropic stacks. Citicoline, NALT, Phosphatidylserine, Maritime Pine Bark Extract — I consider these ingredients to be great foundational nootropics, upon which you may add your more specific, tailored ingredients. (E.g., mixing Performance Lab Mind’s citicoline with a racetam for better cholinergic synergy.) 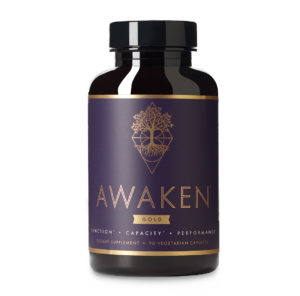 Okay, so you value the natural nootropics (or at least I do) yet you want something with just a little more oomph without compromising your long-term brain health or becoming addicted to some cheap-O stimulant. Well, here you go: Awaken Gold, Awakened Alchemy’s Noopept-containing version of their Awaken nootropic stack.

I call this supplement a “bionic” brain health stack due to a predominantly natural nootropic composition that’s only slightly enhanced by a synthetic cognitive enhancer, the popular racetam-like Noopept. It’s sort of like the supplement version of those sci-fi dudes who are 90% human and 10% robotic arm.

But what’s so cool about Noopept? Let me tell you:

While many nootropic enthusiasts might be turned off by Noopept altogether due to the compound’s synthetic status, it doesn’t pose any significant health risks or concerns — if anything, the opposite.

However, if you’re not into Noopept, Awakened Alchemy offers the non-Noopept Awaken stack, which supplies all of the same, awesome, natural nootropics found in Awaken Gold — minus the Noopept. Supplying awesome nootropics, such as KSM-66 ashwagandha for anti-stress, anti-anxiety relaxation and citicoline for daily, long-term brain boosts. Either way you go — Awaken or Awaken Gold — you’re receiving a high quality, highly effective brain booster. (And special props to the Awakened Alchemy team for upgrading this stack over the past year from their original, not-so-cool-but-still-pretty-cool Awaken formula.)

The first obviously unique feature (at least relative to the other two entries here) is Noopept. Few mainstream nootropic supplements carry it, especially in addition to other awesome nootropics. And what’s particularly cool about Awaken Gold’s Noopept is how it surrounds it with natural, brain healthy nootropics and herbal extracts, including the premium KSM-66® brand of ashwagandha.

The only ingredient that might not work as well as people think: Beta Phenylethylamine (PEA). I get that this is a popular feel-good compound, and it’s theorized bio-activities make sense. Yet, it may lack oral bio-availability, reducing its overall effect in oral supplement form. However, if this is the only potential weak point here, I use this only to highlight the overall strength of this stack.

Awakened Alchemy deserves extra geek points for offering two versions of their Awaken formula: Awaken (no Noopept) and Awaken Gold (with Noopept), as I’ve covered in my Awaken vs. Awaken Gold comparison review. Here’s what’s super groovy about that: many supplement manufacturers offer caffeinated vs. non-caffeinated versions of their main nootropic formulas; yet, there’s nothing really that interesting about caffeine in general. Instead, Awakened Alchemy offers a base non-synthetic nootropic stack or the same stack plus one synthetic (Noopept) without compromising the nootropic appeal to these supplements. (I say this coming from the stance that caffeine and other cheap stimulants aren’t true nootropics.)

And there ye be: The Best Nootropic Supplements of 2019.

Of all the manufactured nootropics out there (and there’s a lot: just type “nootropics” on Amazon to see), these three are some of the best for go-to daily brain boosts — in my geeky opinion. Not only are these effective at enhancing brain health and function but they’re generally safe and well-tolerated for long-term use; even when paired with other awesome nootropics.

On that note, I view all of these as awesome “foundation” nootropic stacks with which to build upon with other nootropic stacks. After all, most of the fun that comes with being a nootropic geek is finding your own DIY bio-hacking stack that suits all of your particular needs and goals. I’m confident that these three supplements will work for most everyone …but for that additional oomph, consider stacking these supplements with other awesome nootropic products. (E.g., Mind Lab Pro’s citicoline with your favorite racetam.)

With each year, we’re seeing an increasing push away from pharmaceutical brain pills and smart drugs and pull back towards natural health herbs and compounds; the type we’ve been consuming as a species for centuries. However, as technology progresses, so do the forms of these legendary health botanicals. With that in mind, I look forward to the progress we make from 2019 to 2020 towards promoting healthier, smarter thinking — regardless of how increasingly dumb the content of our thoughts seems to be.