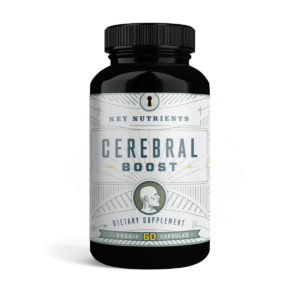 Key Nutrients has perhaps one of the coolest label designs on the 2018 nootropic market, wrapping their bottles with an almost Bioshock-y, steam punk art-style. Which is somewhat fitting for a brain bio-hacking supplement.

But you’re not here for shallow art criticism, are you?

You’re here to know whether or not the formula inside of Key Nutrients Cerebral Boost bottle is any good.

On that note, let’s get on with the Key Nutrients Cerebral Boost review to see if this nootropic supplement’s walk matches its talk.

Compared to other supplements that share this ingredient profile (it seems like there are a lot these days), Key Nutrients Cerebral Boost does just a little bit better in the dosage department. But is this an ingredient profile that you’ll even want to take, good dosages or no? Let’s find out.

Vitamin B12 (as methylcobalamin) – Good B12 form (better than cyanocobalamin) and a hefty enough dosage. B12 is key to a healthy cognition and, really, a healthy everything, as its involved in many, many bio-pathways. Vegans and the elderly require this vitamin, in particular. More on Vitamin B12.

Phosphatidylserine (10%) – Why not supply 100 mg of 20% PS rather than 200 mg of 10% PS? Either way, this nootropic phospholipid is great for cognitive clarity and longevity. More on Phosphatidylserine.

DMAE Bitartrate – I’ve been seeing this ingredient more and more, yet I’m not sure why. Data on this beauty compound’s nootropic potential has been scarce, and as far as I know no game-changing developments on this ingredient have been recently discovered. At most, it may help with concentration for those with hyperattention or neurodegeneration issues. For the average, healthy user, though, it’s hard to say. More on DMAE.

L-Theanine – I’m pretty happy to see this green tea amino in Cerebral Boost. L-theanine uniquely enhances alpha brainwaves, which have been associated with calm, creative thinking. What’s cool about this ingredient, too, is that if you mix it with caffeine, you may reduce caffeine’s jittery side effects while sustaining the focus benefits — more so than if you were to supplement L-theanine or caffeine alone. Purdy neat, right?! More on L-Theanine.

Fortunately, I’m smart AF and can counter marketing magic with my highly advanced intellect, which right now is telling me that… well, Cerebral Boost might actually be the real deal here.

For one, Cerebral Boost makes a pretty significant addition to this common ingredient profile that is somewhat of a game-changer. I’m talking, of course, about L-theanine — an awesome nootropic that, while common to many brain health supplements, isn’t often seen with this particular list of ingredients.

And for two, Cerebral Boost doses its ingredients fairly well, sticking to a simple stack of seven ingredients, leaving out all of the unnecessary fluff that needlessly detracts from the ingredients that work.

Having said that, there is one unnecessary ingredient in this formula. I’m talking, of course, about DMAE — a not-so-awesome nootropic that doesn’t have enough clinical research under its belt to warrant its use in so many brain health stacks. This isn’t exactly a deal-breaker, but Cerebral Boost could do without it.

Aside from that, Cerebral Boost is all-in-all a decent nootropic stack. Not the biggest or the bestest, but it’s enough for a subtle brain fog lift, clearing the mind for the second half of your shift, class, etc.

This is the pricing option listed at Key Nutrients. Other retailers may save you a couple bucks or so, but generally this product hovers around the $20 per bottle range.

With an emphasis on mental performance — namely “Enhanced Memory and Mental Acuity” — Key Nutrients Cerebral Boost seems to target both academics and professionals. Really, just about anyone may benefit by these ingredients, with exception to DMAE.

You can buy Key Nutrients Cerebral Boost through Key Nutrients website, as well as Amazon and Jet… and I think that’s about it? Haven’t seen too much on this supplement from other sellers and online retailers.

Yes — of all the supplements that share this formula design, Key Nutrients Cerebral Boost is the most promising I’ve seen in awhile. Granted, it’s not the most complete nootropic design — nor is it anywhere near my favorite — but it’s a well-crafted, finely polished brain health supplement, nonetheless.

Could it be better? Yes.

Could it be worse? Yes, much worse.

For the price tag, Key Nutrients Cerebral Boost is a valuable stack that’s at least worth a try, if you’re considering this list of nootropic ingredients. It’s cheap enough that you could add it to your other brain health stacks, too, which, if you’re a nootropic geek like me, is purdy cool.