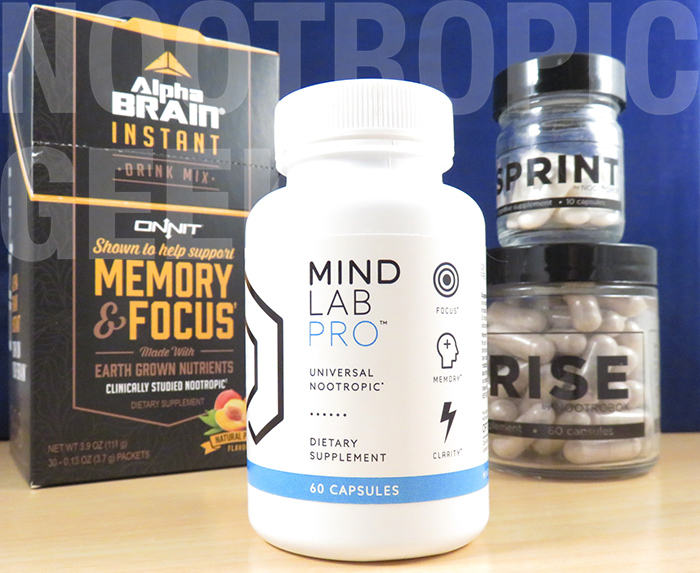 Every year I make the same New Year’s resolution: Don’t change for the better.

I make this resolution because, given the statistically high rate of resolution failure (I’m pulling this out of my butt, but we all know it’s true), odds are I will break the self-promise and actually enact some form of self-improvement.

But Nootropic Geek! you say. How is improvement possible when you’re already the best?

I am flattered, guys, but let’s get real: It’s not me personally who will be doing the changing, but rather the nootropics that I take. So long as nootropic manufacturers keep improving their products, so will those products help improve me.

In other words, my reverse resolution is to not take better nootropics *wink wink nudge*.

With that in mind, here is my top 3 list of which Nootropic Supplements to Buy in 2017 to help guide us through the year as our annual resolutions come crumbling down around us: 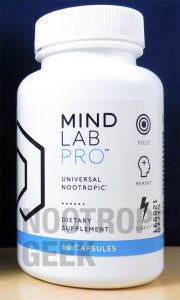 Mind Lab Pro sells itself with the headline “100% Brainpower.”

Of all the nootropic products I’ve tried & reviewed, none have reliably boosted mental performance as well as Mind Lab Pro. There are several reasons for this:

As such, Mind Lab Pro seems to help every cognitive ailment, whether it’s due to poorly optimized neurotransmitters, low brain energy, unbalanced brainwaves, impaired cerebral circulation, or you simply failed to sleep the night before.

This why I supplement Mind Lab Pro everyday, and why I have no problem recommending it to everyone, regardless of age.

Outside of the formula’s content, Mind Lab Pro deserves additional Geek points for:

And for having one the coolest, cleanest labels & websites. The professional design alone is enough to have me shouting Shut up and take my money! 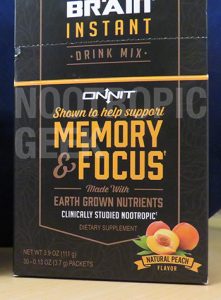 Last year I was a big fan of the original Onnit Alpha BRAIN formula.

This year I’m converting to Alpha BRAIN Instant, which is essentially the same formula with a few notable differences. All of them for the better:

I say the “Flow Blend” is the best blend, because it delivers what I view as the most valuable benefit of this stack: L-Tyrosine + L-Theanine + Oatstraw for relaxing boosts on focus & creativity. Plus some Phosphatidylserine for enhanced memory power.

More of these nootropics is definitely a good thing.

Furthermore, the transition to powder drink mix servings and the addition of BioPerine Black Pepper seem to fulfill the “Instant” identity of this Alpha BRAIN Instant formula. While the former change is more dramatic (and honestly just kind of cool), the latter is more subtle for its ability to enhance the bio-availability of every other ingredient in the formula.

As such, Alpha BRAIN Instant takes the Alpha BRAIN formula and makes it more powerful and more instantaneous for (believe it or not) a lower price per serving.

What’s better than that?

Alpha BRAIN has an ingredient that no other formula has: AC-11®.

This special brand of Cat’s Claw, which is purported to serve antioxidant & immune-boosting benefits, has yet to demonstrate nootropic value in a clinical trial. Despite this, AC-11 potentially gives Alpha BRAIN an edge over other nootropic stacks, a feature I appreciate for its innovation.

While Alpha BRAIN Instant lacks the nootropic finesse of Mind Lab Pro, opting for generally plain ingredients & herbal extracts, its overall design is impressive in its own right: The liquid delivery and black pepper extract bode well for the stack’s potency & bio-availability. Additionally, ingredient choices such as Alpha-GPC & Pterostilbene are better than other options of similar bio-action (such as Choline Bitartrate & Resveratrol, respectively).

Onnit has a reputation for delivering clean, green, Earth-grown supplements, and Alpha Brain is no exception. While Alpha Brain Instant notches in more additives due to its powder form, none of them raise any RED flags. Other key notes:

This last point in particular deserves major Geek points. There’d be much less BS on the market if more manufacturers studied their products the way Onnit does.

Nootrobox is a San Fran-based supplement stack, designed by techie propellerheads for techie propellerheads. Just about everything in its design comes across as sleek & geek in that distinct Silicon Valley fashion: From its simple, clear packaging to its “synergistic” 2-in-1 product stack.

The two Nootrobox products being:

Used correctly, RISE + SPRINT may help “bio-hack” the brain into reliable states of peak mental performance, especially for creatives who require brain boosts more sophisticated than those supplied by an average cup of joe.

Personally, I’m not huge on caffeine in nootropic stacks, unless it’s complemented by L-Theanine, a relaxing amino acid found in green tea. Nootrobox has L-Theanine and then some, stacking up the basic Caffeine + L-Theanine stack with other focus enhancing ingredients.

Yet, even if you opt against SPRINT’s Caffeine, you’re still getting a trio of well-researched adaptogen cognitive enhancers with RISE. Either way you turn with Nootrobox, you’re getting value.

That in itself is pretty damn cool.

The yin-yang design of RISE + SPRINT supplies exceptional measures of brain healthy nourishment (RISE) with focus-spiking mood boosts (SPRINT). While some products attempt both in a single formula, they often do so through compromising the benefits. Nootrobox compromises nothing, dedicating two distinct formulas for each range of benefits.

SPRINT supplies the quality form of B12 (as methylcobalamin). That’s pretty neat, too.

Both RISE + SPRINT are contained in clean capsules, advertised as “vegan.”

Whether you’re vegan or not, this is always a good thing when it comes to supplement manufacturing. Yet, what’s even cooler than that is that Nootrobox actually encompasses four products, the other two formulas being:

If you wish the achieve peak “bio-hacking” potential, Nootrobox supplies the full 4-in-1 stack in its aptly named FULL STACK® package.

Are these the only nootropics to buy in 2017?

Not at all. The cool thing about this growing topic is that it’s… well, growing. Throughout the past decade, as nootropic research & products have started to hit the mainstream, the quality & quantity of nootropic formulas have been in a perpetual state of improvement.

Yet, having said that, nootropics seem to change as much as they stay the same.

A quick look into nootropic history will show that much of what works today also worked years, decades, centuries ago. With that in mind, I didn’t choose these 3 products because they offer anything entirely groundbreaking or “new.” I chose them because they offer all-natural, time-tested nootropics, ingredients familiar to human history, in technologically updated formats.

As such, these products are simultaneously old & new, ancient & advanced, delivering nootropics that not only have been working for years upon years, but work now better than they have ever before.

For that reason (and that reason alone), you should be able to look at 2017 and say to yourself: There has never been a better time than now to be alive.