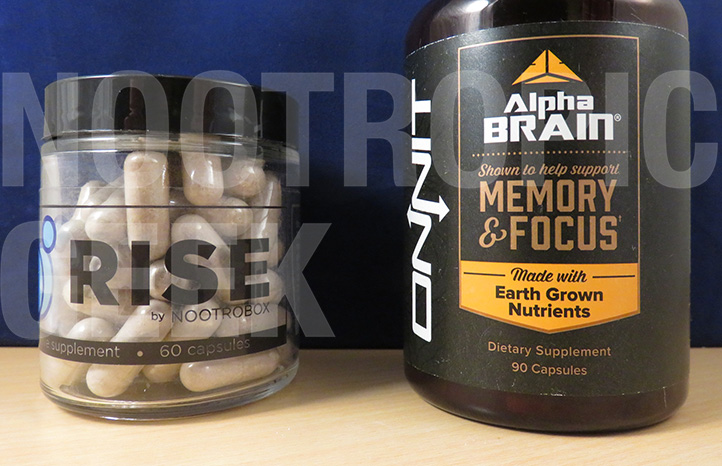 If it weren’t for the “BRAIN” in Alpha BRAIN, the product could easily be mistaken for a gym-enhancement product. For one, it has big buffman Joe Rogan’s name all over it. Plus, the site has “extreme!” athletes coloring its pages.

Nootrobox doesn’t mess around with any of that.

It’s entire design & appeal opts for a more minimalistic, iPhoney, Silicon Valley-y vibe. This is a nootropic stack seemingly for the tech nerds.

In terms of appearance, I find Alpha BRAIN & Nootrobox equally cool, sporting what I consider to be equally impressive formulas. Perhaps you do, too, which is why you came to this review for an answer.

I definitely have an answer for you.

But it may not be all that definitive.

We have the “cool guy” extreme-o Alpha BRAIN up against the nerdy tech-geeky Nootrobox, which you may think I’m biased towards as a geek, but come on… I’m an individual woah-man *SNAP-SNAP*!

However, their differences aren’t only skin deep (or rather plastic deep), as the contents of their formulas widely vary as well. Check it:

Nootrobox in its entirety is pretty slick, but one of its stacks is slicker than the other:

Together, these stacks are intended to work as brain-healthy nourishment (RISE) and focus-spiking mood boosts (SPRINT). I like this as it supports both brain structure & function–i.e. health & cognition. Not that caffeine is the healthiest way to go about spiking alertness, but Nootrobox provides smart, healthy caffeine by stacking it with L-Theanine, B vitamins, & RISE. Read my in-depth review on Nootrobox.

Unlike Nootrobox, Alpha BRAIN stacks its three blends all in one formula, which isn’t as cool as it sounds due to the proprietary nature of these blends. Mehhh… All the same, the blends complement each other well for their diverse emphases on:

Yet, the ingredient that steals the show here is AC-11, a branded form of Cat’s Claw that’s entirely unique to the Alpha BRAIN formula. You can’t find this extract anywhere else. Whether or not Cat’s Claw actually provides significant nootropic benefits remains to be seen, but I like it’s addition here as an X-factor ingredient that may elevate Alpha BRAIN among the elites of nootropic products. Read my in-depth review on Alpha BRAIN.

The ingredients shared between these formulas: B6, Bacopa, Alpha-GPC, and L-Theanine.

Some of these ingredients will make the experience between Nootrobox & Alpha BRAIN somewhat similar, yet the nootropics unique to each formula will ultimately set them apart. Some of these unique features include:

In terms of Potency & Quality, none of these products are perfect.

In fact, Alpha BRAIN immediately enters this section in the red for its use of proprietary blends, which obscure the individual dosages of every ingredient outside of B6 and Cat’s Claw. Granted, most of these dosages look solid, or at least adequate to cover all of the nootropics used here. But it’s still annoying all the same.

Nootrobox, on the other hand, shows all of its dosages, which also look adequate. The RISE formula in particular is impressive for its 900 mg split evenly across three nootropics (300 mg per nootropic). How elegant. Plus the 100 mg of caffeine isn’t an overwhelming amount, at least compared to some stacks that supply upwards of 200 mg to 250 mg of caffeine.

Even so, Nootrobox’s reliance on caffeine diminishes their creativity in finding nootropic measures to boost brain energy naturally, which is exactly what Alpha BRAIN’s quality Vinpocetine & Hup-A extract do. The L-Tyrosine is also nice for this, but could be upgraded to the more potent N-Acetyl-L-Tyrosine.

Because Alpha BRAIN only describes its extracts as “extract,” it’s hard to ascertain the true quality of its herbs–whereas Nootrobox the % standards of Bacopa monnieri & Rhodiola. As far as I know, both products are using equal quality Bacopa, but I won’t know until Onnit tells us.

Nootrobox or Alpha BRAIN: Which is better?

Don’t worry, this isn’t a cop out on having to make a judgment call. Because I do believe that there is a better nootropic stack between these two–or at least one of these stacks I find personally more appealing than the other. But in terms of value, both supplements are equal.

Any attribute that one product excels in is either matched or covered adequately by the other product. Likewise, depending on how you supplement the RISE & SPRINT stacks, both formulas are within a relatively equal pricing range.

With that in mind, you can’t go wrong with either of these products.

Both are high quality.

Both are high value.

Yet, if you want the Nootropic Geek’s personal recommendation, here’s what I think:

I like Nootrobox. I realize appearances aren’t everything, but Nootrobox simply appears better. Namely with regards to how it transparently labels its ingredients: Everything on the Nootrobox supplement facts is openly display, including the individual ingredient dosages.

Alpha BRAIN, on the other hand, went with the ol’ proprietary blend tactic.

This in my book is enough to end on the wrong side of a tie-breaker. Not that I have a complete lack of trust in Alpha BRAIN’s formula. Onnit has an awesome track record as far as clean, quality supplements go. Which is why I’m somewhat surprised to see them go with prop blends, considering how unpopular they are in the eyes of consumers these days.

Which is why I’m ultimately siding with Nootrobox in this one.