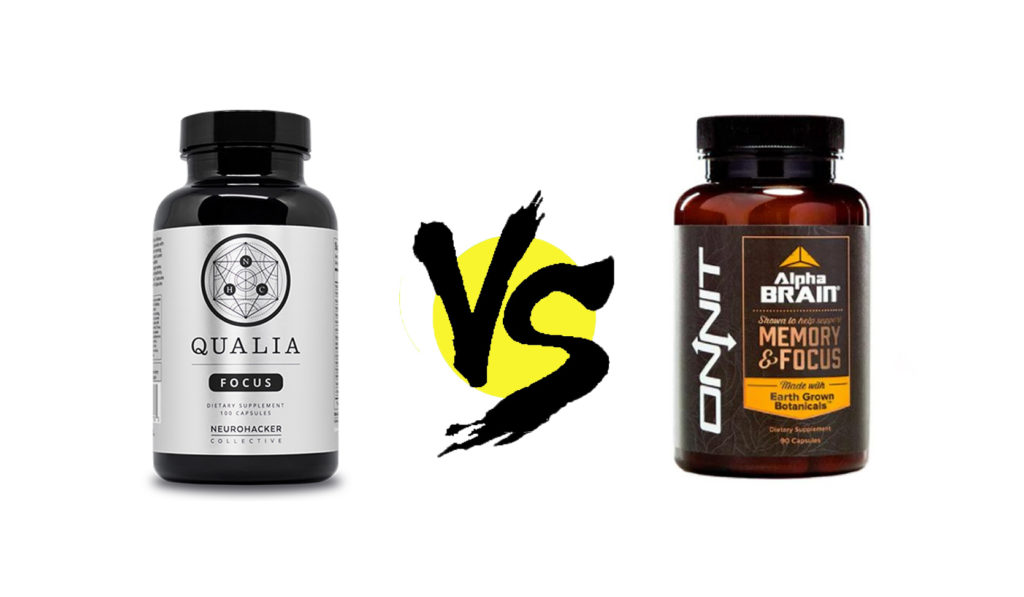 One of them doesn’t even supply caffeine.

For the most part, these supplements are natural, safe, and side effect-free. But what about their main effects? And more importantly: which one is more effective at enhancing brain health and cognition? Let’s read the Qualia Focus vs. Alpha BRAIN match-up to find out.

Qualia Focus and Alpha BRAIN have different styles, but do their styles accurately represent their content? Before diving into content differences in their formula designs, let’s first take a look at the ingredients filling their formulas.

The Qualia brand desperately needed a cheaper nootropic supplement in their Qualia series, and Qualia Focus seems to fit that bill. Compared to its predecessor Qualia Mind, Qualia Focus supplies nearly the same ingredient-heavy formula, only with a few key ingredients removed.

However, for the most part, Qualia Focus still delivers an impressive, comprehensive, Qualia experience, supplying 24 ingredients total with its 5 capsule serving sizes. Although, strangely, Qualia Focus doesn’t add any special “focus boosters” to earn the “Focus” in its name — at least in comparison to other Qualia products, e.g., Qualia Mind. If anything, Qualia Mind is a better focus sharpener than Qualia Focus.

Alpha BRAIN earns the “alpha” in its name with its focus on alpha brainwave promotion (via L-theanine) and alpha-GPC cholinergic brain boosts. However, these encompass only two ingredients of Alpha BRAIN’s total formula design, which splits into three proprietary (yes, proprietary, unfortunately) blends:

With so many ingredients on Qualia Focus’ side, it’s hard to list many relatively “unique features” on the Alpha BRAIN side. But there are some worth noting. First I’ll list a few (not all because that’ll take forever) of Qualia Focus’ unique nootropics and features before jumping into Onnit’s stack.

I’ll tell you right now, unless Alpha BRAIN hits the high quality marks for all of its ingredients, then it’s simply not taking this round. Qualia Focus skips no corners when it comes to the potency and quality of its ingredients.

Alpha BRAIN has decent quality ingredients. They do more than enough to supply an effective formula, but a few improvements could be made — e.g., B6 should be P-5-P (not pyridoxine HCl), the herbal extracts could be better explained, and either alpha-GPC could be replaced with citicoline or supplemented with uridine. Also, Alpha BRAIN goes the proprietary blend route, which is annoying — although, to their credit, they detail the individual dosages of a few ingredients, helping us to fill in the blanks on their formula a bit.

Even so, all in all, Qualia Focus demonstrates better quality ingredients at (presumably) higher dosages than Alpha BRAIN’s stack.

Bottle to bottle, Qualia Focus more than doubles the price of Alpha BRAIN. And while Qualia Focus does supply way more capsules and servings, the superstack still significantly outweighs Alpha BRAIN on the price per serving scale as well.

Having said that, it’s pretty annoying that neither product supplies the somewhat standard 30 servings. Although, if you buy Alpha BRAIN Instant, you’ll receive a month’s worth of supply for a cheaper price per serving, too. Qualia Focus also has a Subscribe & Save option, which decreases its monthly per bottle price, but even so: Qualia Focus is way more expensive than Alpha BRAIN.

(And Qualia Focus is the cheapest Qualia option thus far.)

Qualia Focus or Alpha BRAIN: Which is better?

Which sounds a lot like “Qualia Focus is the better supplement here”… and, yea, I’d say that’s fair in this comparison review. The Neurohacker Collective team clearly understands nootropics and how to put together a comprehensive nootropic formula. Perhaps they go a little too balls to the wall, stacking damn near everything on the nootropic periodic table of elements. (Which leads to a way too expensive supplement.) But I’m impressed by their products nonetheless.

Alpha BRAIN is great for memory and relaxed (caffeine-free) thinking.

Due to the largeness of the Onnit brand, as well as all of the well-known personalities involved with Onnit, some may like or dislike Alpha BRAIN based on factors not at all related to the supplement’s nootropic merit. For the most part, I can say that Alpha BRAIN is a competent brain boosting stack that’s at least worth a try — especially if you get your hands on Alpha BRAIN Instant, which is better than the original Alpha BRAIN formula. Plus, it’s caffeine-free, which is a bonus for the non-stim nootropic enthusiasts.

I basically already told you: Qualia Focus is the better supplement.

And Qualia Focus earns that win on several measurements — from the quality of its ingredients to its selection of ingredients to their dosages, so on and so forth. Granted, it’s also much more expensive than Alpha BRAIN, but there’s an obvious reason for this: Qualia has more high quality nootropics than Alpha BRAIN.

You might be surprised to learn that Qualia Focus is the budget option within the Qualia line of supplements… but that’s just the way it goes. Having said that, if you have the dough to spend, Qualia Focus is definitely the preferred option over Alpha BRAIN. And yet if you’d like to save your dough on even better nootropic supplements, I recommend checking out my Best Nootropic Supplements of 2018 list.