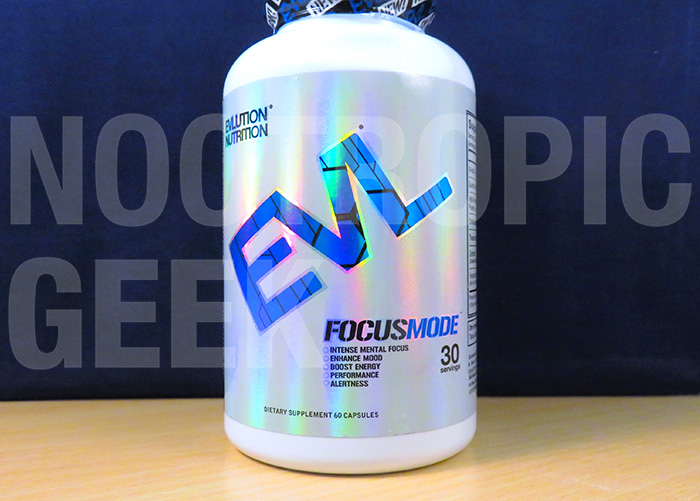 From a manufacturer that typically focuses on “beast mode” I wouldn’t necessarily expect too much nootropic action. To critics like me, EVLUTION says f*** that and gives us FocusMode, which is essentially Beast Mode for the Brain.

In this way, a bridge is being built between the bros & the geeks (as if the two are all that exclusive). FocusMode triggers mental power that aids both exam day & leg day.

It reduces the stress of all-night essays & overworked glutes.

Or at least that’s the intention of FocusMode. Let’s hit the review to see how it delivers.

Serving Size: 2 Capsules
Servings Per Container: 30
Other Ingredients: Gelatin, Magnesium Stearate, Silica, Titanium Dioxide, FD&C Blue 1
Directions: As a dietary supplement, consume 1 serving (2 capsules) daily with a glass of water. For best use, take after breakfast in the morning. To avoid sleeplessness, do not take within 4 hours of sleep. 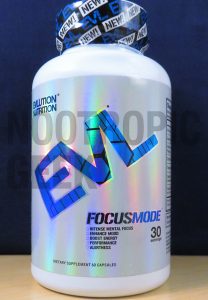 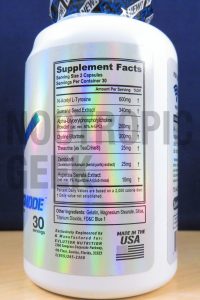 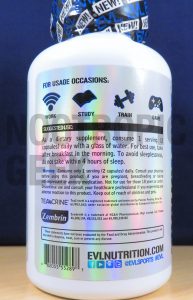 The blue scheme of EVLUTION products is one of the coolest designs on the market. Even better, they provide quality athlete-geared products. But what about their nootropics? Check the reviews:

Guarana Seed Extract – Contains natural guaranine, a chemical similar to caffeine in both form & function. For all intents & purposes, guaranine is caffeine (the only difference being that it’s caffeine sourced from guarana). More on Guarana.

A-Glycerylphosphorylcholine Powder (std. min. 50% A-GPC) – Alpha-GPC is a quality nootropic source of choline for its ability to cross the blood-brain barrier, unlike inferior sources of choline (like the next ingredient). More on Alpha GPC.

Theacrine (as TeaCrine®) – Another compound structurally similar to caffeine. Acts as a stimulant, yet doubles as a sedative when supplemented in low-to-mild dosages. Caffeine is also believed to have sedative effects at low doses, but theacrine’s sedation come at even higher doses.

Huperzia Serrata Extract (std. min. 1% Huperzine A) (club moss) – Why not throw in a little Hup-A? This nootropic packs a powerful, potent punch in such small dosages and demonstrates a decent amount of synergy with Alpha-GPC by reducing inhibition of neurotransmitter acetylcholine, the byproduct of Alpha-GPC supplementation. More on Huperzine A.

EVLUTION Nutrition stacks up supplements for the bros.

Which is why I’m a little surprised to see them treading into nootropic geek territory. Yet, the manufacturers haven’t lost their identity with FocusMode as the stack seems to support both gym-time & library-time behavior.

It’s a mental edge sharpener that enhances memory & mood, while pumping up the energy. It supports academic & work-related cognitive functions with Alpha-GPC + Hup-A, while taking care of the here-and-now issues with focus, stress, & energy.

And the energy is multi-angled, coming from guaranine + caffeine + theacrine, which is groovy, but there’s one issue I have with it: It’s not nootropic energy.

This would be a prime formula to add L-Theanine, a calming, focus enhancing amino that complements jittery stimulants such as caffeine by reducing the attention-reducing jitter. Perhaps the Zembrin may help in this department, but the L-Theanine + Caffeine duo is a more natural focus-enhancing combo.

However, something tells me that that intended audience of this supplement doesn’t mind caffeine in their nootropics. In which case, I’m fine with it as well. Considering the identity of EVLUTION supplements, this stack seems intentionally designed to deliver the benefits it does: Brain chemicals & brainpower for the bros.

The pictographs above very nearly detail my exact daily college routine. FocusMode seems primarily geared to college-aged workers & students, yet it’s benefits extend to anyone who practices these behaviors.

FocusMode can be bought directly through EVLUTION Nutrition’s website or on BodyBuilding.com (EVL products are generally cheaper on the latter option).

Plus it’s relatively cheaper, saving you money in the long-run.

Students: Kick the coffee and opt for FocusMode instead.