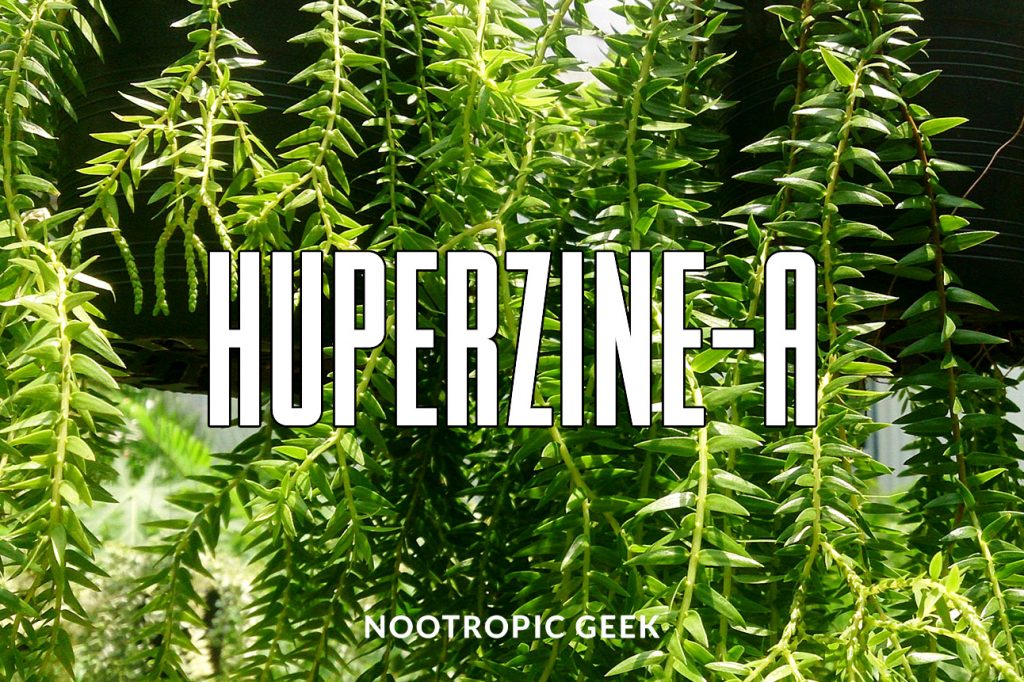 China has something for us: Huperzine A — a natural occurring alkaloid sourced from Chinese Club Moss, imbued with the gift of superhero powers or something. Or at least that’s what the Chinese research would have you think. (What’s your angle, China?!)

In all actuality, hup-A is an awesome nootropic, potentially an essential nootropic to any DIY nootropic stack, considering that nearly all of the top nootropic supplements carry it.

But is it an effective cognitive enhancer as a standalone ingredient?

Or is its value dependent on the nootropics stacked with it? Let’s read my review to find out.

TL/DNR: Huperzine-A is a natural-synthetic nootropic drug that primarily operates as an acetylcholinesterase inhibitor. Most research centers on hup-A’s clinical potential in treating neurodegenerative disorders, but its bio-activities may justify its use as a recreational cognitive enhancer.

How Huperzine-A Is Supposed to Work

You’ll notice that I used “synthetically” and “natural” in the same sentence.

This wasn’t a cognitive slip-up. (If it was, then I want my money back on all the huperzine A I’ve been supplementing for the past X years.)

Huperzine-A, like vinpocetine, straddles the line between natural supplement & pharmaceutical drug due to its hybrid identity as a natural-synthetic: Huperzine-A is a natural occurring compound that must be synthetically extracted to achieve nootropic effect. Technically, hup-A has been consumed for centuries in traditional Chinese health concoctions involving Chinese Club Moss, but natural dietary sources of hup-A are not pure or concentrated enough to deliver the cholinergic benefits for which hup-A is currently famous.

As such, hup-A may be completely legal in certain regions, sold OTC as a dietary supplement, yet barred by prescription in other countries.

However, regardless of its legal status, hup-A’s bio-actions remain the same, which (as far as we are able to identify them) include:

The primary biomechanism of huperzine A is its inhibition of acetylcholinesterase (AChE), an enzyme that catalyzes the breakdown of neurotransmitter acetylcholine. By inhibiting AChE, huperzine A potentially increases both the count & duration of acetylcholine activity, in effect indirectly enhancing the brain’s cholinergic system, which is associated with general cognition, memory, mental performance, & long-term brain health. This has major neuroprotective implications with regards to neurodegenerative states associated with inadequate acetylcholine activity.

The most advertised benefit of hup A: Memory.

Recreationally, huperzine A is rarely supplemented as a standalone ingredient, often stacked with other cholinergic nootropics such as citicoline, alpha GPC, racetams, and so on. Given its tiny dosage requirement, the drug nearly comes standard with manufactured nootropic stacks, particularly those geared towards memory.

However, most clinical research centers on the drug’s neuroprotective potential against serious neurodegenerative states (i.e. Alzheimer’s, dementia). As such, it may be hard to evaluate the extent of hup A’s benefits for the more casual nootropic enthusiast. Having said that, based on huperzine A’s well-demonstrated bio-activities, it makes perfect sense to add it to your nootropic stack.

Some preworkout stacks carry huperzine A as a “focus enhancing” agent. While there’s little research to validate its usage in a sports nutrition context, I view it as a why-the-hell-not addition. Hup A is simply good to get, regardless of how you get it.

In this small, double-blind, placebo-controlled study, 34 pairs of middle & junior school aged adolescents were chosen (based on complaints of memory problems) to receive administration of either 100 mcg Hup A or placebo daily for a 4-week period. By the study’s end, the researchers found the Hup A group to score better on the Memory Quotient tests than the placebo group, leading to the conclusion that the “Hup capsules enhance the memory and learning performance of adolescent students” — namely on the subjects of language (but not mathematics).

Normally, I focus primarily on the enhancement aspect of nootropics, shying away from the treatment angle on substances. However, huperzine research is nearly a subset of Alzheimer’s research given its legally prescribed role for the neurodegenerative disease state. As such, I offer this study to entertain the potential of Hup A as a memory & cognitive enhancer, not to recommend treatment advice to my readers.

Having said that, this study shows clinical promise with regards to the efficacy & safety of Hup A in reducing the symptoms of neurodegeneration. In the study, 200 mcg Hup A was administered to 50 Alzheimer’s patients (53 patients received placebo) for a span of 8 weeks. By the study’s end, the researchers found: “About 58% of patients treated with Hup showed improvements in their memory, cognitive, and behavioral functions” — a significantly higher efficacy rating than the placebo group.

This placebo-controlled, double-blind, randomized trial administered either 400 mcg huperzine A or placebo to 202 patients diagnosed with possible Alzheimer’s for a 12-week period to assess the compound’s effects on cognitive function & active daily life (ADL) affected by neurodegeneration. By the study’s end, the hup A group demonstrated significant improvement in cognition, behavior, & mood as compared to the baseline measures & placebo. The researcher’s conclusion: “huperzine A remarkably improves the cognition, behavior, ADL, & mood of AD patients.”

This fairly recent review (2012) attempted to assess the clinical efficacy & safety of huperzine A for the treatment of patients with mild cognitive impairment (MCI). Based on the selection criteria of “randomised, parallel-group, placebo-controlled trials comparing huperzine A to placebo in patients with MCI”, no eligible trials were identified, ending the review on a rather sad note: “The currently available evidence is insufficient to assess the potential for huperzine A in the treatment of MCI.”

How to Take Huperzine-A

Always check for “Huperzine A” on the label. If the Supplement Facts simply state Huperzia serrata (not “extracted from Huperzia serrata“) without any mention of Huperzine A, then odds are you’re receiving raw clubmoss powder, an ineffective source of nootropic Hup A levels.

My Experience with Huperzine-A

Nearly every nootropic stack I’ve supplemented has carried huperzine A.

Yet, I’ve never supplemented the nootropic on its own.

Frankly, I wouldn’t expect any acute mind-blowing effects on cognition (at least at my spry, young age). Some online reviews compare hup A’s effects to galantamine, stating that it “sharpens focus” but loses its edge after awhile. Others describe no significant cognitive effect on its own, but that it greatly enhanced the vividness of their dreams.

Many nootropic enthusiasts supplement huperzine A strictly for the purpose of enhancing lucid dreams. I feel I’ve taken hup A long enough to determine whether it truly enhances dream vividness or lucidity, but I’ve taken it so long that I’ve forgotten the baseline experience with which to compare the hup A experience.

Personally, I have other nootropics that I rely on for acutely enhanced memory & cognition. With that in mind, I supplement huperzine A with the intention of potentiating the cholinergic action of those nootropics. And the experience has been bueno so far.

Is Huperzine-A a Good Nootropic?

The claim of huperzine-A being a good nootropic is not scientifically substantiated under the current lack of research backing this drug’s cognitive enhancing potential.

However, given its low dosage requirement, there’s little to no reason not to include hup-A in your nootropic stack, particularly if you intend to secure long-term memory & cognition for your later years.

Can I prove that? Not really!