Before we had MTV’s Real World…

Long before the Kardashians…

We had ancient Greek Mythology: e.g. Zeus begets Athena through Titan goddess Metis before marrying Themis. Aphrodite marries Hephaistos while sporting a long love affair with Ares & later Poseidon. Then Poseidon casually disguises himself as Enipus to trick Tyro into sleeping with him.

The drama. The scandal. The kosmos.

Embedded in the myths is Coeus (or Koios), Titan God of Intellect, inspiration of KOIOS, the nootropic supplement stack. Judging by its source of inspiration, KOIOS can either go horribly right or fantastically wrong… I’m not sure what’s better or worse.

Serving Size: 2 Capsules
Servings Per Container: 30
Other Ingredients: Hypromellose (capsule), Dicalcium Phosphate, Rice Flour, and Magnesium Stearate. Contains: Soy.
Directions: As a dietary supplement, start with one (1) capsule to assess tolerance and work your way up to two (2). Do not take more than 4 in a day. Read warnings and only use as directed. 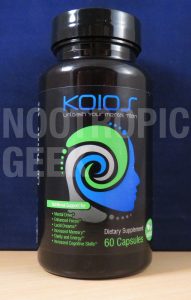 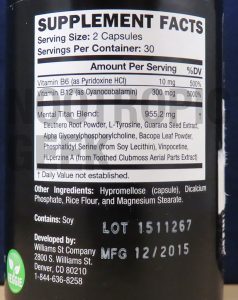 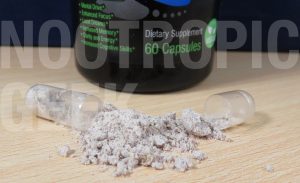 Listen. Unleashing the mental titan is what I’m all about. I claim that phrase as my modus operandi.

However, although KOIOS’ tagline speaks to me on a literal & metaphysical level and although KOIOS chooses smart nootropics to back it up, its ingredient qualities fail to walk the talk.

B Vitamins – B6 & B12 are solid vitamin choices for cognition, mood, & brain health. But both of them could be upgraded to higher quality forms: B6’s pyridoxine HCl to “active” P-5-P; B12’s cyanocobalamin to cyanide-free methylcobalamin.

L-Tyrosine – Another powerful anti-stress compound, particularly during conditions of stress. But… KOIOS uses the wrong form again, instead of higher-grade N-Acetyl L-Tyrosine. More on L-Tyrosine.

Phosphatidylserine – Great brain-boosting memory enhancer–in fact, the only nootropic with a bona fide FDA health-claim. Recent trends are gearing towards sunflower-sourced PS, but this Soy Lecithin flavor should still work. More on Phosphatidylserine.

Beyond the names of the ingredients KOIOS chooses, the stack leaves plenty to be desired. For one:

Frankly, I want questions answered, not produced, by a Supp Facts table.

Additionally, the ingredients are overwhelmingly in cheap, inferior forms.

After all, we’ve benefited from these natural ingredients for eons without the need of high-premium, high-potent extracts. Yet, when I see a supplement that sets its standards low on nootropic quality, I have to wonder what else is being sacrificed by the manufacturers for the sake of profit?

Here’s another reason why I wonder about KOIOS:

Its website includes the nootropic Cat Claw, a traditional herb currently investigated for brain health purposes–yet, the Supp Facts fail to include it.

Not that I’m about to throw on the tin-foil hat and cry conspiracy, but underneath the sleek, shiny (& admittedly clever) marketing of this supplement, there seems to be some shady happenings happening here, ya dig?

KOIOS is sold online directly by the Koios manufacturers & through other various retailers.

Although I didn’t cover them in this review (or any reviews yet), the KOIOS drink supplements are what initially led me to this series of nootropics. Very few manufacturers have mastered the liquid nootropic stack, so I figured if KOIOS is bold enough to venture into potable brain boosters, then KOIOS could more than handle capsulated stacks.

Clearly, KOIOS knows what works for enhancing brainpower. Every ingredient choice in this formula is spot-on, combining for an impressive mix of nootropic bio-actions. Take notes from these selections.

But stop taking notes on the forms of these ingredients (unless you’re the “10,000 ways not to make a light-bulb” Edison type), because KOIOS takes a major nose-dive in the quality department of its nootropics. Considering KOIOS clearly knows what works for brainpower, I have to imagine they know their ingredients are low-grade.

Seems like a (purposefully) missed opportunity to me. Yet, in the end, it’s an opportunity all the same. These ingredients will still enhance brain health to a certain degree. Just not to titan proportions.