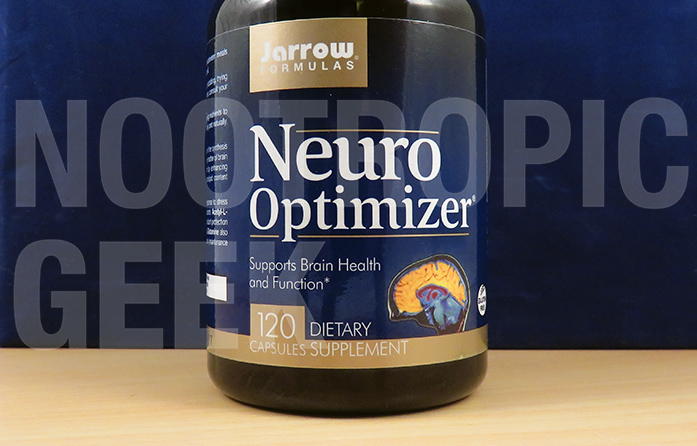 Everyone forgets “where the hell” they put their keys.

Oh yes, the nootropic review: Neuro Optimizer is here to reduce the brain farts while increasing the brainpower.

Serving Size: 4 Capsules
Servings Per Container: 30
Other Ingredients: Silicon dioxide, magnesium stearate (vegetable source) and cellulose. Capsule consists of gelatin.
Directions: Take 4 capsules per day with juice or water between meals or as directed by your qualified healthcare professional. 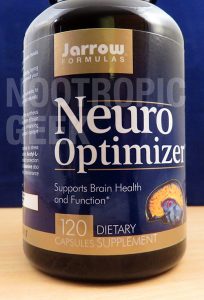 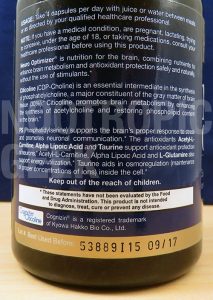 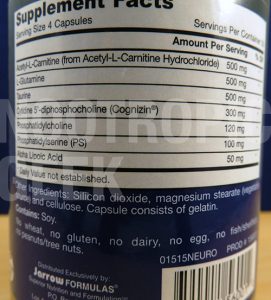 Seven ingredients doesn’t stack up to much for most nootropic-oriented nutritional supplements, but Jarrow Formulas Neuro Optimizer makes it work. Let’s review ’em:

L-Glutamine – Used to create GABA, a “downer” neurotransmitter that reduces excessive excitatory neuroactivity for mood balancing effects. But I’m not sure it’s all that necessary in this formula. More on Glutamine.

Cognizin – One of the best nootropics, if not the best, and in quality branded Cognizin® form. Citicoline supports brain energy, brain chemicals, & brain regeneration, and works really well as a whole-brain optimizer. More on Citicoline.

Phosphatidylcholine – Essentially a nutritional choline donor used in the synthesis of acetylcholine, a neurotransmitter for memory & learning, as well as mood.

If the Neuro Optimizer brand wasn’t so modest, I’d let the nootropic speak for itself.

But it takes the marketing high-road, eschewing the vaguely defined benefits & garish “miracle” claims that have practically become a staple of supplement advertising. Its only self-description:

Neuro Optimizer® is nutrition for the brain, combining nutrients to enhance brain metabolism and antioxidant protection safely and naturally, without the use of stimulants.”

Which is all true, but doesn’t seem to paint the full picture.

Combined, these qualities classify Jarrow Neuro Optimizer as a clean, reputable, well-designed nootropic stack, suitable not only for immediate boosts in cognition & brainpower, but for long-term mental aptitude. Considering the price as well, I could see this as a stack to start supplementing early for its neuroprotective advantages and continuing well into old age for its neurorestorative benefits.

Any age group looking for a little extra mental power may benefit from Neuro Optimizer, but Jarrow Formulas seems to primarily target the older ladies & gents, typically around the 50+ age range.

You can buy Jarrow Formulas Neuro Optimizer through various supplement retailers, like iherb and amazon. It’s a relatively easy product to find in brick and mortar natural health food stores too. This is because Jarrow has been making health products for decades now — they have lots of shelf space.

Neuro Optimizer supplies two major, researched-backed nootropics with brain-boosters that only increase with value the more you age. Compared to many other brain booster stacks that attempt attracting customers through flashy, over-complicated formula designs, Neuro Optimizer is a breath of healthy fresh air.

Not that Jarrow Formulas Neuro Optimizer covers all the bases on brain boosting with its short 7 ingredient formula, but it hits enough important pressure points to keep your mental processes in working order.

After factoring in the price as well, there’s little reason to pass up this dietary supplement. Let’s get to those ratings…