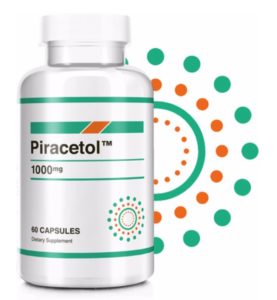 Piracetol sells itself as a piracetam alternative, yet I think a more honest description of this supplement would say: Alpha BRAIN alternative.

Thanks to the success of Joe Rogan and Onnit, Alpha BRAIN has become a big name in the supplement game, making the Alpha BRAIN formula an identifiable stack of ingredients. My hypothesis (and bear in mind that it’s only a hypothesis) is that Piracetol wants in on the Onnit action.

Having said that, if this supplement actually does supply a legitimate alternative to synthetic nootropics, such as piracetam, then we might have something cool on our hands here. But we can’t know for sure until we read the damn Piracetol review now, can we?? Let’s get to it.

Serving Size: 2 capsules
Servings Per Container: 30
Other Ingredients: Capsule Shell (Hydroxypropylmethylcellulose), Magnesium Stearate.
Directions: Take 2 capsules with breakfast each morning. Those with a higher tolerance to the product can increase their dosage to 3 or 4 capsules per day. Do not exceed 4 capsules per day.

Fortunately, the Piracetol “Proprietary Blend” isn’t a true proprietary blend, as these guys actually revealed the individual ingredient dosages on their Supplement Facts label. Sort of a sloppy mistake, but, hey, I’ll take it!

And I’ll take these ingredients as well — some awesome nootropics on this list — yet, we should perhaps check out the quality and quantity of these nootropics before committing to this formula. Check it:

Oat Straw Extract – Oat Straw is an interesting nootropic. Similar to L-theanine (the next listed nootropic), Oat Straw is believed to simultaneously boost relaxation and focus by promoting alpha brainwaves, the cognitive frequencies associated with calm, meditative creativity. Yet, Oat Straw doesn’t seem to possess any long-term cognitive benefits. Only short-term in short bursts, and primarily for older users. More on Oat Straw.

L-Theanine – I supplement L-theanine on the daily. It’s a great nootropic to mix with your coffee, as L-theanine’s boosts on alpha brainwaves help reduce the jittery side effects of caffeine without impairing the stimulant’s boost on focus and energy. More on L-Theanine.

Alpha GPC – Sort of a small amount of an otherwise effective nootropic choline donor. Is it the best choline donor? Not in my book: I prefer Citicoline for its duo supply of choline + cytidine. Yet, alpha-GPC does supply a higher concentration of choline per serving. (Unfortunately, 50.6 is a weak serving size.) More on Alpha-GPC.

Resveratrol 98% – A hugely popular antioxidant, best known as a grape antioxidant (and better known by some as a wine antioxidant). May reduce free radical damage in the brain; however, the next antioxidant is the better resveratrol form.

As the original and most basic racetam, piracetam is one of the more low-grade smart drug options, at least relative to, say, phenylpiracetam, Noopept, etc. And I say “low-grade” both in terms of cognitive benefits and adverse side effects.

Simply put, piracetam is an entry-level nootropic smart drug. In fact, the synthetic cognitive enhancer is reported to have a higher safety rating than table salt.

Even so, not everyone is into synthetic supplements. To the more organic supplement users, Piracetol may seem like a valid, natural pathway to the “smart drug” experience. And, really, the manufacturers aren’t far off, given that piracetam is a cholinergic nootropic and so is Piracetol. For instance:

What’s more, Piracetol also enhances dopaminergic pathways (L-tyrosine) as well as alpha brainwaves (L-theanine, Oat Straw), potentially supplying a diversity of brain bio-benefits …Yet, I’m not sold on this supplement. For one: the dosages aren’t all that great and the nootropics aren’t all of the greatest quality. Alpha BRAIN essentially provides the same formula, yet in a much better format.

And for two: The ad copy gives off major red flags — “Piracetol allows you to live up to your full mental capabilities. It’s been proven a safe and highly effective Piracetam alternative.” Piracetol has been “proven”?? No, Piracetol has not been proven to do anything — such claims require positive clinical research.

Piracetol has no research under its belt. Smells like bogus.

Piracetol lists a range of users that may benefit by the “Piracetol Advantage”, including: College and University Students, Professionals in High Pressure Careers, Athletes, Scientists, and Biohackers. Essentially, anyone looking to dominate the competition in their field, whatever that may be.

As far as I know, you can only buy Piracetol via the Piracetol website. The only other site I’ve found that sells (or at least claims to sell) Piracetol is Male Muscle Shop …however, with product descriptions such as this:

This most wondering and powerful supplement is created under the neuroscientist, they have used all natural ingredients in this supplement, that all are the far beneficial for the mental ability in any way.

— I’m reasonably skeptical against the Male Muscle Shop listing. If you’re looking for Piracetol, buying through the Piracetol site seems your best bet.

As its advertising suggests, Piracetol is a natural nootropic supplement that does engage cholinergic brain pathways somewhat associated with the bio-activity of piracetam. But I wouldn’t necessarily supplement Piracetol as a piracetam substitute.

In fact, I wouldn’t really substitute piracetam, if I didn’t have to. (Personally, I’m somewhat indifferent towards piracetam anyways. There are plenty of natural nootropics that are better than piracetam, at least from a cognitive enhancing angle.) So, really, the entire design of Piracetol seems confused.

Which makes me confused. And I don’t like being confused.

My suggestion: Go for a similar nootropic supplement with better forms and dosages. This isn’t the most groundbreaking formula, in terms of nootropic choices. You can do better than Piracetol for more or less the same price.