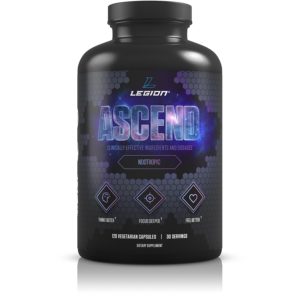 Not good in that it’s all good — in that it covers all cognitive issues and brain pathways — but what ASCEND does cover, it covers very, very well. And Legion does this by taking a far too underappreciated approach to brain health: The Building Block Approach.

By focusing on the basic units of cognitive health and function, Legion Athletics ASCEND supplies a fundamentally key nootropic supplement that may work for just about anyone looking for enhanced mental performance.

Serving Size: 4 Capsules
Servings Per Container: 30
Other Ingredients: Microcrystalline Cellulose, Magnesium Stearate, Silicon Dioxide.
Directions: To support cognitive health and performance, supplement with one serving of ASCEND every day, preferably with food. You can take a full serving all at once or split it into two equal doses taken several hours apart (we recommend that you try both ways and see which you like best).

Agmatine Sulfate – This is an interesting choice on Legion Athletics part. For one, Agmatine Sulfate is typically supplemented for its N.O. pump enhancing benefits, qualifying it more so as a pre-workout agent than a nootropic. Yet, Legion Athletics impressively explains the purpose of this ingredient as a nootropic by listing a few studies that found improvements on the brain’s serotonin activity and stress resistance with Agmatine supplementation.

Bacopa Monnieri (50% bacosides) – I recommend this herbal adaptogen to students for its well-documented benefits on memory and learning. Legion Athletics supplies Bacopa as a potent 50% bacosides extract at a solid 330 mg per serving. More on Bacopa Monnieri.

Citicoline – CDP-Choline is one of the best nootropics in the game, delivering two key brain health compounds: 1. choline for acetylcholine production, and 2. cytidine for uridine synthesis. Together, these two brain building compounds may improve brain energy and plasticity. More on Citicoline.

L-Alpha Glycerylphosphorylcholine (GPC) – More choline, except in the form of a more choline-rich nootropic: Alpha-GPC. While I favor citicoline over alpha-GPC for the former’s additional cytidine, alpha-GPC is still a valuable nootropic choline source. More on Alpha-GPC.

From the get go, I have at least three positive things to say about Legion Athletics ASCEND:

Of the ingredients, three are cholinergic brain boosters: Bacopa Monnieri, Citicoline, and Alpha-GPC. Together, these nootropics enhance the brain’s cholinergic status by increasing raw choline material for acetylcholine synthesis (citicoline and alpha-GPC) and by inhibiting acetylcholinesterase, the enzyme responsible for acetylcholine breakdown (Bacopa monnieri).

As a result, ASCEND may not only increase acetylcholine levels but keep them active for longer.

The remaining two ingredients — Agmatine Sulfate and Uridine — benefit the brain via non-cholinergic pathways. While I was initially scratching my head at Agmatine, the scientific literature helps make sense of Legion’s decision to include it. Likewise, uridine seemed somewhat of an odd choice, given that citicoline already supplies uridine.

Yet, as Legion pointed out in their ad copy, more uridine isn’t at all a bad idea here. Essentially, the two constituents of citicoline (choline and uridine) are further matched by alpha-GPC’s choline and the uridine monophosphate.

While Legion Athletics ASCEND’s narrow focus on cholinergic brain power leaves many other cognitive pathways untouched — e.g., dopamine, brainwaves, etc. — the synergistic “building block” design does set ASCEND up as an awesome “base” stack with which to build upon. A smart start for any new nootropic enthusiast looking to jump into the zany world of brain-hacking.

The “building block” design of this brain stack seems to deliver a fundamental nootropic product that may improve the cognitive health and function of just about anyone.

You can buy Legion Athletics ASCEND through a few retailers, including Amazon and the Legion Athletics website. GNC does include other Legion supplements… but I’m not seeing ASCEND in their online catalog. Hoh well.

At least it works at boosting the brain’s cholinergic pathways.

While it’s not the most diverse acting nootropic supplement, falling significantly short of the universal nootropic rank, ASCEND is a powerful stack with significant brain building potential. Whereas most athletic nootropic supplements opt for a more synthetic, druggy, caffeinated approach to brainpower, ASCEND seems to operate with a bigger picture in mind: long-term mental performance.

Give it a few weeks, see how it works, then, of course, check back here to let me know what you think. Or don’t …But please do. (I’m so lonely.)