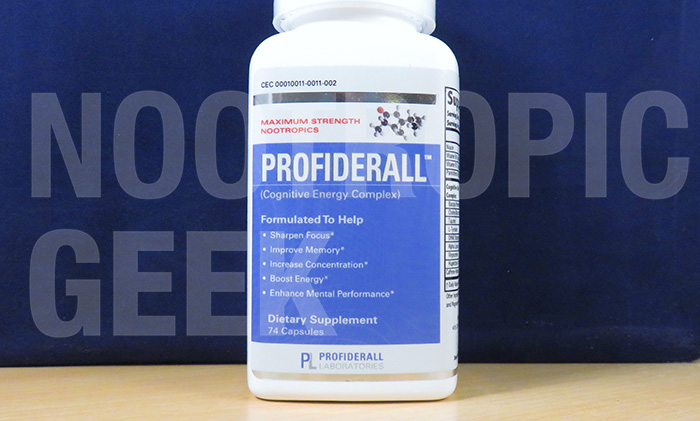 Reading this review does not require a prescription.

Drinking water does not require a prescription.

This is common among “smart drug”-substituting supplements as a means to attract to Adderall-using demographics. I have no problem with this. However, Profiderall doesn’t quite come across as an effective Adderall substitute.

So what the heck is it? 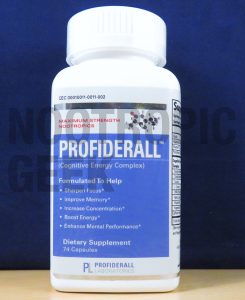 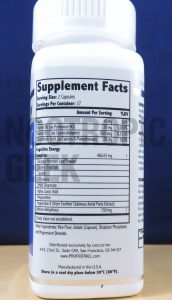 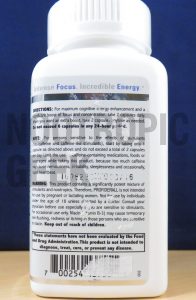 Ingredients look good. Dosages do not, namely because I can’t see them. That’s a pain that I’ll get into later, but for now let’s take a look at Profiderall’s ingredient reviews:

B Vitamins – B3, B5, B6, and B12 are all present here, stacking up high doses of four mid-to-low quality B vitamins. Combined, these vitamins may enhance mood & mental energy, effects that become increasingly noticeable over time as risk of B vitamin-deficiency increases. More on B Vitamins.

Choline Bitartrate – Choline is great for the brain. It helps produce neurotransmitter acetylcholine for neuron-to-neuron synapses and phosphatidylcholine for cell membranes. But choline bitartrate is the wrong form as it has a hard time crossing the blood-brain barrier. Alpha-GPC (or even better: Citicoline) would have been the preferred nootropic options. More on Choline Sources.

Taurine – Not sourced from bull testicles (but it is a major constituent of bile… yeck). Taurine is commonly found in energy drinks, yet is not a stimulant, but rather a decent neuroprotecting antioxidant with potential anti-stress sedative benefits. More on Taurine.

L-Tyrosine – Speaking of anti-stress benefits, L-Tyrosine is one of my go-to “as-needed” focus enhancers for its ability to diminish the negative effects of stress (and/or sleep deprivation). Although, I’d like to see the more bio-active N-Acetyl-L-Tyrosine form here. More on L-Tyrosine.

DMAE Bitartrate – Boosts neurotransmitter acetylcholine, optimizes neuron membranes, settles agitated Theta brain waves, crafts ham & turkey sandwiches… Not really on this last point, but I wouldn’t be surprised considering everything else it does. More on DMAE.

Alpha Lipoic Acid – The “Universal Antioxidant” is here to protect your neurons against free radical damage. May also enhance mitochondrial output for increased energy (but that seems to be more attributed to R-Lipoic Acid). More on Alpha Lipoic Acid.

Vinpocetine – Is it organic or synthetic? Vinpocetine, the synthetically derived compound from the natural Periwinkle plant, may greatly improve cerebral circulation in tiny doses, delivering more oxygen & nutrients (i.e. fuel) to the brain. More on Vinpocetine.

Caffeine Anhydrous (150 mg) – i.e. caffeine powder. Ever heard of caffeine? it’s in practically everything these days, including our nootropic stacks, which… meh, fine, but I don’t consider it to be a true brain healthy nootropic. 150 mg Caffeine equals nearly 2 cups of coffee.

Profiderall: Neither Smart Nor Drug

That’s a pretty harsh headline, right? Especially for a nootropic stack that advertises itself as “a new category of ‘smart drug.'”

Needless to say, Profiderall is appealing to the “smart drug” Adderall crowd, offering a potentially valuable healthy alternative to the amphetamine-driven creations of our money-hungry pharmaceutical drug dealers. As tacky as these “-erall” titled knock off brands are, I do appreciate them for expanding our cognition enhancing options outside of the likes of Adderall, Ritalin, Modafinil, etc., etc.

Mehhh… It could use some improvement, starting with:

The fact that Profiderall uses a proprietary blend at all is questionable. Seeing the low quality of most of the ingredients only further diminishes my confidence in the blend.

Not to say that the ingredients are outright bad choices. Bacopa is one of my favorite nootropic herbs. Choline is great for cognition. And the Taurine & Tyrosine combo delivers the good effects of energy drinks, minus all of the junk & sugar.

Yet, Bacopa Extract (for bio-active bacosides) would have been better. The Choline is in a non-nootropic form. And the L-Tyrosine should be N-Acetyl-L-Tyrosine.

Profiderall sells itself as a worthy alternative to Adderall, but comes across as a cheap, knock off alternative to energy drinks. Which isn’t a bad thing if you’re looking for a mood-enhancing, nootropic source of caffeine. But I wouldn’t necessarily consider Profiderall as a proper brain health bio-hacking tool.

Profiderall appeals to college students, twenty-something workers, and party animals. Its emphasis on stimulating feel-goods has less to do with brain health than quick spurts of mental energy.

The biggest complaint against Profiderall is that its dosages are too low to have any significant nootropic effect. Asides from the B Vitamins & Caffeine, of course.

In defense of Profiderall, we can’t even see all of its dosages, so who knows exactly what’s going on inside of its blend (that’s not a really good “defense,” is it)? Having said that, you can be confident that Profiderall will work as caffeinated “energy drink” alternative, given its supply of B vitamins, amino acids, & caffeine.

I don’t know if it quite earns the status of “smart drug” alternative as I doubt that the formula serves any therapeutic potential with regards to ADHD, inattention, etc., etc. Yet, it’s definitely safer & cheaper, so I can at least recommend a try, iffen you’re lookin’ to buy.