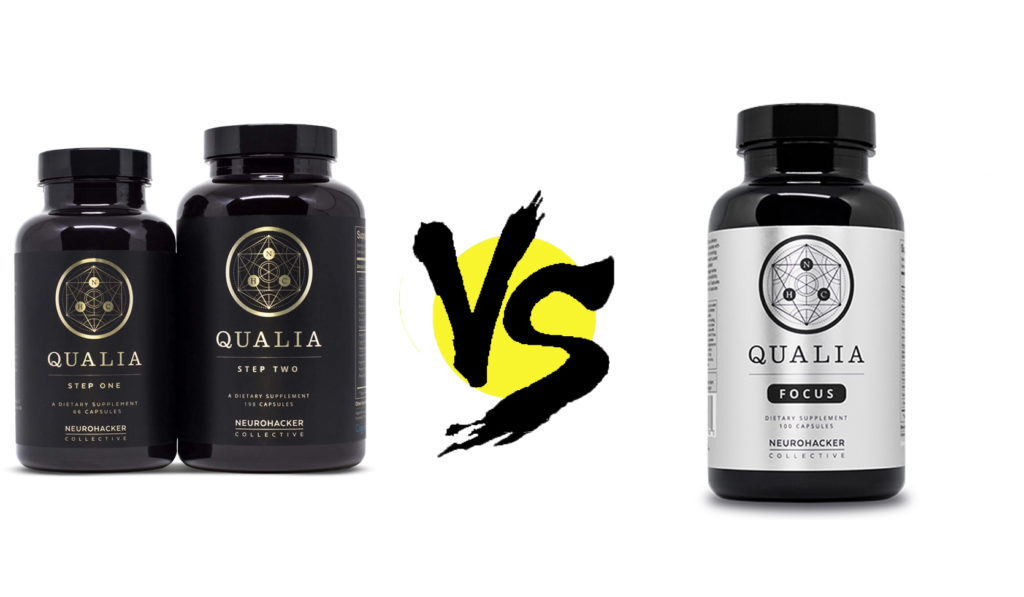 Qualia Original Stack vs. Qualia Focus represents a significant shift from Neurohacker Collective’s original two-step superstack vision to their smaller, simplified, yet still pretty super nootropic formula design. Between Qualia Original Stack and Qualia Focus we have Qualia Mind (and Qualia Mind Caffeine-Free), which is arguably the best Qualia supplement in the line-up.

Qualia Original Stack is the OG Qualia formula, the first nootropic supplement by Neurohacker Collective to showcase many of the nootropic ingredients found in later Qualia formulations, including Qualia Focus. Yet, as Neurohacker Collective progressed their formula design, they didn’t add to their original stack but rather reduced it to a smaller, more (*ahem*) focused nootropic design.

Between Qualia Original Stack and Qualia Mind, I favor the “Mind” version for its simpler formula. But does that automatically qualify Qualia Focus, the simplest formula yet, as the better version in this match-up? Hard to say until we take a look at their ingredients and formulas.

The Qualia Original Stack actually qualifies as two stacks, split into two separate formulas: Step One and Step Two. Each formula may qualify as a well-rounded nootropic supplement on its own; however, Qualia smartly divides them into two separate stacks with separate directions to ensure their ingredients are sufficiently absorbed. (And, presumably, to save Qualia customers from choking.)

Essentially, what Qualia seems to have done was take all of the best nootropic ingredients of other mainstream nootropic supplements and compile them all into a single two-stack supplement. I imagine there’s a method to Qualia’s madness, but in it’s presentation it simply comes across as too much — even if it’s too much of a good thing. Not to mention, Qualia inserts Noopept and DHEA into its formula, sacrificing the all natural label for a pretty awesome synthetic drug (Noopept) and an unnecessary prohormone (DHEA). I say “unnecessary” because it’s both ineffective and banned for competitive use. So, competitive athletes may be barred from all of Qualia’s other awesome nootropic ingredients, simply due to the poor placement of DHEA.

Yet, while an affordable brain health supplement was direly needed by Qualia, the one thing I can’t figure out with this one: where does the “Focus” come in?

Thus, you may stack Qualia Focus with other mix-and-match nootropics of your liking to a greater effect than Qualia Original Stack …and still save money, baby. (That is if you’re a smart nootropics shopper and don’t mind the relative inconvenience.)

This is mainly helped by the massive serving sizes, which Qualia sacrifices in terms of total servings per bottle… but still.

Qualia Original Stack and Qualia Focus cut virtually zero corners with their ingredient quality, supplying premium grade compounds and herbal extracts to ensure maximum bio-availability per nootropic. Granted, with so many ingredients it may be the case that certain ingredients have a harder time being absorbed into the body at all, especially in the case of Qualia Original Stack. But on an ingredient-by-ingredient basis, both supplements here impress with their high quality nootropics.

Although, the capsules may use some cleaning. (Why is rice filler at all necessary here?)

For a 22-serving supplement, Qualia Focus is pretty expensive, counting up to $3.14 per serving. Yet, Qualia Original Stack more than doubles that amount, charging you $6.77 per serving, which is… a lot of furkin’ money to spend on a single supplement.

Granted, you’re getting essentially double the nootropics with Qualia Original Stack’s two-fer-one superstack design. And, plus, for both supplements, you may save a significant amount if you buy their Subscribe & Save order options — as opposed to single bottle orders. But even so: Qualia Original Stack and Qualia Focus are expensive brain health stacks with the former being one of the most expensive mainstream nootropic supplement stacks available in 2018.

Qualia Original Stack or Qualia Focus: Which is better?

Qualia Focus is simpler and cheaper.

I’d guess the primary reason Neurohacker Collective included Qualia Focus in their nootropic brain health line-up is simply to provide a cheaper, more accessible option. Qualia Focus is certainly the most accessible formula with the Qualia name attached. Having said that, we’ll need to wait on more customer reviews to see how this compares to the other stacks, but for the most part it delivers much of the same Qualia experience expected of the other Qualia nootropics.

The heavy price tag associated with Qualia Original Stack is nutso. In my opinion, it simply isn’t worth it. And while Qualia Focus is still a pretty damn expensive formula, it’s nowhere near as bad as Qualia Original Stack. (This price discrepancy is even more baffling between Qualia Focus and Qualia Mind, of which the latter isn’t really that much bigger than Qualia Focus.) On that note, if you want an effective, yet inexpensive nootropic stack, consider my Best Nootropic Supplements of 2018 list, which lists some pretty impressive brain boosters.

Factoring in price, I recommend Qualia Focus over Qualia Original Stack. Yet, even pricing aside, I believe an argument could still be made for Qualia Focus, simply on the negative ingredient interactions front. So, my final judgment call here is: