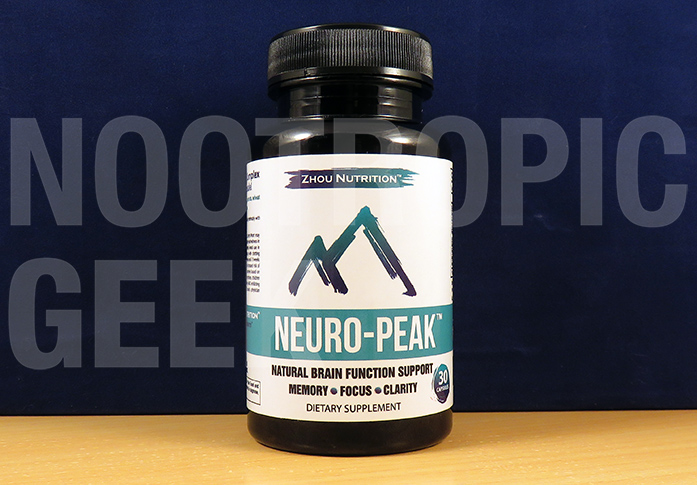 Before climbing a mountain, it’s smart to:

So on and so forth… And if I’m looking at the brain is a “mountain,” Neuro-Peak accomplishes the prep-work flawlessly and actually covers a decent amount of ground at the base of the mountain. But perhaps it covered too much ground, expending all of its resources on circumnavigating the mountain rather than climbing it.

How close to the “peak” does Neuro-Peak travel?

Let’s find out in this review: 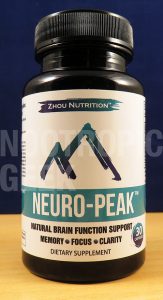 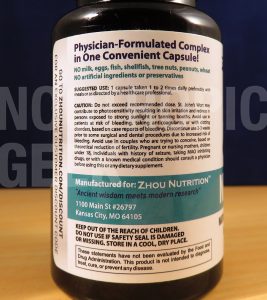 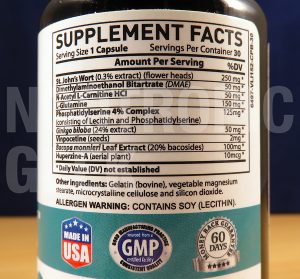 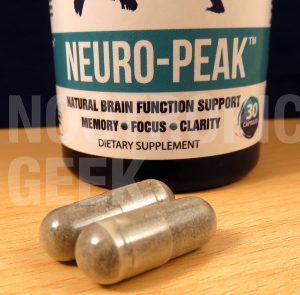 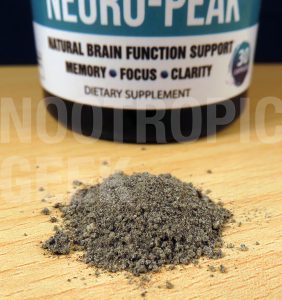 When I look at Neuro Peak’s label, the left half of the supplement facts look good. The half that lists the ingredient names. But the right half, the dosage half, is looking pretty, well… I’ll get to the dosages in a bit. Let’s first take a look at the ingredients:

L-Glutamine – I’ll need to see more research before I’m willing to classify L-Glutamine as a “nootropic.” The amino acid is fairly common in the diet, so it doesn’t seem all that necessary here. More on Glutamine.

Ginkgo Biloba – The world’s most popular memory-booster, although the memory benefits are more short- than long-term. Seems to primarily work by increasing cerebral bloodflow, increasing inflow of oxygen & nutrients and outflow of toxins & waste. More on Ginkgo Biloba.

Vinpocetine – Lab-synthesized compound from periwinkle plant. Also boosts cerebral bloodflow, in addition to acting as an antioxidant & anti-inflammatory in the brain. More on Vinpocetine.

Huperzine-A – Prevents the breakdown of acetylcholine, making Hup-A a smart addition to any formula with acetylcholine promoters. More on Huperzine A.

As this review progresses, the “Peak” part of Neuro-Peak’s name is going to look more & more ironic. Because, despite all of the awesome nootropics in this formula, Neuro-Peak’s many benefits have very little room for growth due to a couple puzzling design choices:

It’s a common problem with nootropic stacks that opt for a higher number of ingredients (in this case: 9), but fail to supply enough milligrams to reach Critical Mass Dosages. Admittedly, 9 ingredients isn’t a ton of nootropics, but it’ll take at least two servings to reach adequate levels of each nootropic–consequentially, doubling the cost of Neuro-Peak.

Yet, even if you’re doubling the cost, here’s why Neuro-Peak is still worth the investment:

The only remaining contention lies on DMAE, which some users swear by. Other users swear against.

My stance: DMAE seems to work, but is set back by reported side effects, notably among pregnant women. As such, DMAE should definitely be avoided by pregnant women, but is okay in this formula for its low dosage. I highly doubt it’ll do much, bad or good, with only 50 mg to stand on.

Neuro-Peak is described as a “physician-formulated” nootropic stack “formulated by a physician who specializes in anti-aging.” As such, Neuro-Peak is a clock-rewinding brain health product for the older ladies & gents.

Neuro-Peak is primarily sold through Amazon as well as other various online retailers.

But, judging by the dosages, the sum of Neuro-Peak’s ingredients might actually be less than the parts. At least, this seems to be true under the dosages provided. Technically, the directions state that 1-2 capsules should be taken daily, but I’d prefer Neuro-Peak to stick to a 2 capsule daily directive and supply enough capsules to last 30 days.

More capsules, same price?? Well, no duh I want that.

Everyone wants that with every supplement!

But with Neuro-Peak that would be the fair price & plan with these ingredients & dosages. On that note, Neuro-Peak is often found on sale with its prices nearly slashed in half, so if you can find the deal, then I more than recommend doubling down on Neuro-Peak.