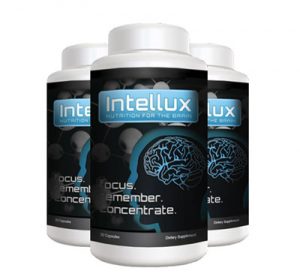 Taken straight from the book of Frankie Goes to Hollywood: Intellux, the self-described #1 Rated All Natural Smart Pill, tells you to RELAX! with its relaxing, mood-boosting nootropic stack. However, while Frankie tells you Relax, don’t do it, Intellux offers relaxation while giving you the go-ahead, spiking motivation to vault you over your mid-day worries & woes. In other words, they tell you to relax and DO IT!

But actually I’m siding with Frankie on this one: relax, don’t do it.

Intellux may have marginal brain health benefits, most notably in the mood boosting region, however it’s nothing to get too amped about. You could probably achieve whatever benefits are here with a standalone St. John’s Wort supplement. Which is a bummer, given that Intellux advertises itself as some sort of extreme-O smart pill stack. But Intellux isn’t really a smart pill.

They sort of lied about that.

Just for the hell of it, let’s review these ingredients from highest dosed to lowest. See what’s mostly filling up these capsules:

N-Acetyl-L-Carnitine HCl – ALCAR is the correct form of L-Carnitine for its nootropic benefits (other Carnitines are unable to cross the blood-brain barrier). This amino seems to work by enhancing mitochondrial energy output. More on ALCAR.

A better ALCAR option: if you’re looking to boost energy without resorting to risky stimulants, ALCAR may help. But it works best with other mitochondrial energy enhancing antioxidants, such as CoQ10 and PQQ. One of the best energy boosting options (*ahem* — non-stim energy boosting options) is Performance Lab Energy, a unique energy supplement that improves healthy, natural cellular energy rather than simply loading you up with caffeine. Read my full Performance Lab Energy review here.

DMAE Bitartrate – I’m seeing more & more of this in self-described “smart pills.” Admittedly, I’m personally not sold on it. Some research suggests positives; however, personal experience has found this ingredient to be largely ineffective at doing just about anything for mental performance. More on DMAE.

Ginkgo Biloba (as 24% extract) – Best known for its boosts in circulation, particularly among older peeps, but Ginkgo seems to serve quick boosts in memory & attention as well. More on Ginkgo Biloba.

Vinpocetine – If it’s lab-synthesized from a natural source, is it still “natural”? That’s the debate on this “natural” synthetic compound derived from periwinkle plant. The compound serves a wide range of benefits from enhanced cerebral circulation to antioxidant brain protection, the sum of which has been shown to improve memory after only 2 days of supplementation. More on Vinpocetine.

Intellux Review: Relax, Don’t Do It! 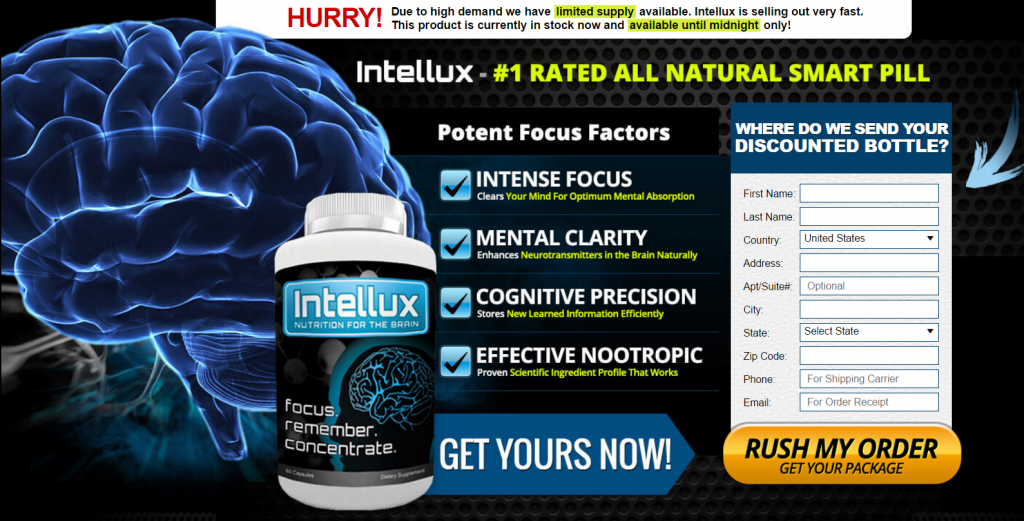 Intellux is both a pretty cool supplement name and incredibly dorky. It smells like something some guy in a college dorm room came up with while stoned with his business school buddies. Like, “Hey, maaaan, you know what sounds cool: Intellux.” And everyone agreed, but no one really knew anything about nootropics. They just like the name.

And, well, perhaps whoever made this stack does know a few things about nootropics. But also this exact formula is used by many other supplement stacks, so odds are this is just another generic copy-cat brain booster stack.

Intellux dresses itself like a scammy “focus-booster,” and, well, while it’s not exactly a scam …it’s nothing special either. Given that the leading ingredient is St. John’s Wort, one of the most popular natural anti-depressants, and that the second leading ingredient is Glutamine, another notable mood-booster, Intellux seems to act primarily as a “happy pill” rather than a “smart pill”–as the ads seems to suggest. That’s completely fine. However, not only is this not a smart pill but it’s also not the best “happy pill” either.

It’s a decent mood booster, but not enough for me to experience an exceptionally uplifting, highly productive workday.

The customer reviews I found on this product describe its primary effect as “relaxed focus”–one report comparing the experience to the feeling of first waking up, except alert & focused.

While there are ingredients here that may directly boost brainpower (e.g. Ginkgo, Vinpocetine, Hup-A), they come second to the mood-boosters. But I suppose all of the ingredients make some sense here, even if they’re all not of the great quality or dosages. You can’t complain too much here, right?

Of course, you can!

Intellux can be bought directly from the manufacturer’s website.

If something makes you feel all good and happy, either it’s really good for you or really bad. Usually, really bad. But in the case of Intellux, feeling really good is the result of generally natural, healthy ingredients and not some feel-good drugs.

Intellux has a few ingredients that make sense, if the goal here is to boost mood. But they’re not exactly stand out ingredients.

Plus, the supplement’s marketing feels incredibly hokey and scummy, if not scammy. Intellux relies on a few buzzword keywords, such as “Focus” and “Concentration,” irresponsibly giving this product a “smart pill” vibe when the truth is far from that. Frankly, I think you can do much better than this, whether you’re young or old.

If you’re looking for nootropic stacks that not only work but work really well, check out my Best Nootropic Supplements to Buy in 2019 list: link here.