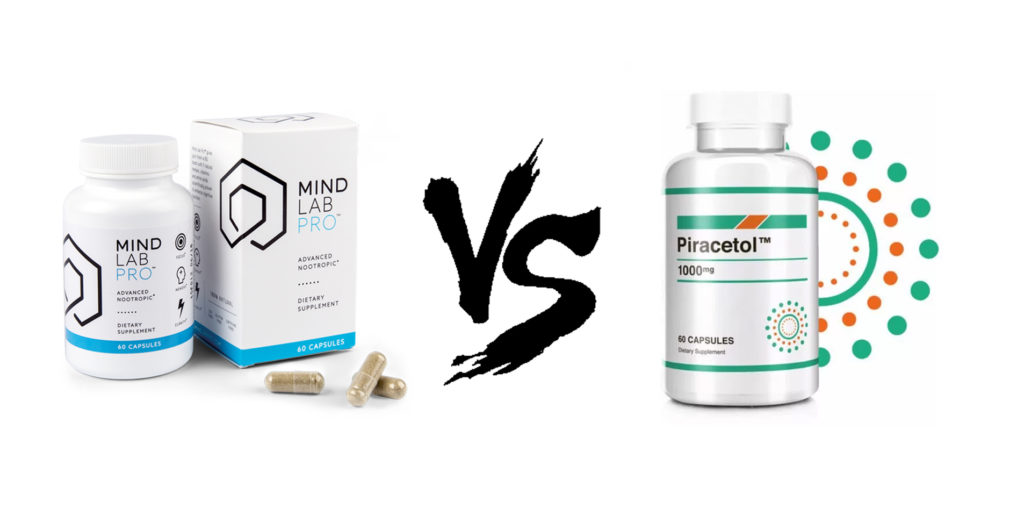 And even more specifically than that: the “alternative to smart drug alternatives” route.

Given that many nootropic enthusiasts view piracetam as a much, much weaker substitute to, say, Adderall and other popular “smart drugs”, it seems a little beyond the point for Piracetol to offer an alternative to piracetam. But, hey, I’ve seen great results stem from bad ideas.

So, is Mind Lab Pro about to be bested by a pretty bad idea? Let’s read the comparison review to find out.

Both Mind Lab Pro and Piracetol select some awesome nootropics. Yet, one has a clearly superior formula design than the other, ultimately winning the first round of this comparison review. Check it:

You’ll notice there are more ingredients than there are brain bio-benefits. Ehem, yes, very attentive you are. Here’s how that essentially works: synergy. By using a diverse mix of well-researched nootropics, Mind Lab Pro seems to target the basic brain bio-pathways towards better cognition via multiple angles. E.g., Mind Lab Pro’s citicoline supplies choline for acetylcholine synthesis, whereas Bacopa monnieri helps prevent acetylcholine breakdown. Together, these two noots improve the brain’s cholinergic status via two separate pathways, and BOOM! — there you have it: synergy.

Because Mind Lab Pro avoids synthetics and stimulants — e.g., caffeine — some of the more extreme-O smart drug users may be disappointed by Mind Lab Pro’s bio-benefits. However, I found Mind Lab Pro’s nootropics to complement the stimulatory effects of more intense brain boosters. For the average nootropic enthusiast, Mind Lab Pro is a great synergistic stack to take with your daily coffee. Read my in-depth review on Mind Lab Pro.

So… hm… Obviously, I’m here to discuss Piracetol’s formula design, yet my first critical point on this stack relates to its advertised premise: a safe alternative to piracetam.

I get this insomuch that some nootropic users may prefer to keep their brain boosting diet free from synthetics and smart drugs. And if a supplement comes along that supplies a legitimate alternative to racetams, then sure: that sounds groovy.

But here’s the thing: piracetam is an overwhelmingly safe nootropic.

And even safety aside, Piracetol’s formula doesn’t really make sense as a piracetam alternative anyways. Perhaps the Bacopa and Huperzine-A combo has enough cholinergic action to sufficiently substitute piracetam’s cholinergic benefits, but that’s pure speculation on my part. Nothing in Piracetol’s formula has been found in clinical research to be on par with piracetam, or any other racetam for that matter. And I point that out because Piracetol even labels itself as a “Proven Alternative” to piracetam.

At best, Piracetol is a weak Alpha BRAIN knockoff with maybe just enough potential to improve your brain choline status. But if I’m looking to replace piracetam, I’m not looking here. Read my in-depth review on Piracetol.

With that out of the way, let’s see what else these formulas have:

Strictly in terms of ingredient choices, Piracetol has a pretty decent formula. Yet, Piracetol’s manufacturers did what many cheap manufacturers do: they sacrificed potency and quality for profit, likely hoping that the name of the nootropics would sell themselves.

Maybe during the days before the Nootropic Geek (that’s MF me, my doods!) that trick might fly. But that’s why I’m here: to set the record straight.

Really, there’s no competition between these two in this round. Mind Lab Pro has great potency and quality. Piracetol does not… Moving onward.

Mind Lab Pro vs. Piracetol: Which is better?

Mind Lab Pro outperforms Piracetol on several (if not all) measures: better quality nootropics, denser dosages per serving, wider diversity of bio-benefits… better pizza, Papa John’s. If you’re in the business for a nootropic supplement that raises the bar across the board — that is to say, a brain booster that boosts the entire brain — then Mind Lab Pro has your brain’s back. This stack doesn’t leave much to be desired.

As far as I can see, the only benefit of supplementing Piracetol over Mind Lab Pro is that Piracetol is generally cheaper than Mind Lab Pro. Especially if you go for that 3 Bottles + 3 Free Bottles price (which, if you really think about it, is actually 6 Bottles for a cheap price). Even so, let’s say you simply like Piracetol’s ingredient choices over Mind Lab Pro. Under this scenario, I’d still recommend not taking Piracetol — instead, look for a similar supplement (there’s quite a bit of them) that offers more or less the same ingredients in better quality formats.

Between Mind Lab Pro vs. Piracetol, it’s an easy judgment call. I’m going for the one that not only stacks awesome, popular nootropics but delivers them in a formula design that actually works. Which is to say I’m going for Mind Lab Pro.

As I stated several times, Piracetol does have decent nootropics. Had the manufacturers actually put in the necessary effort, Piracetol would likely be one of the top dogg nootropic stacks. After all, it has many of the nootropics found in other successful brain health supplements. But the manufacturers seemed to have gotten greedy — or, more likely, they started out greedy, shelling out a bunko product that sounds just good enough on paper to generate decent profits.

Rather than supplying an awesome product that not only works but earns the big bucks it receives. Such as my homie Mind Lab Pro!