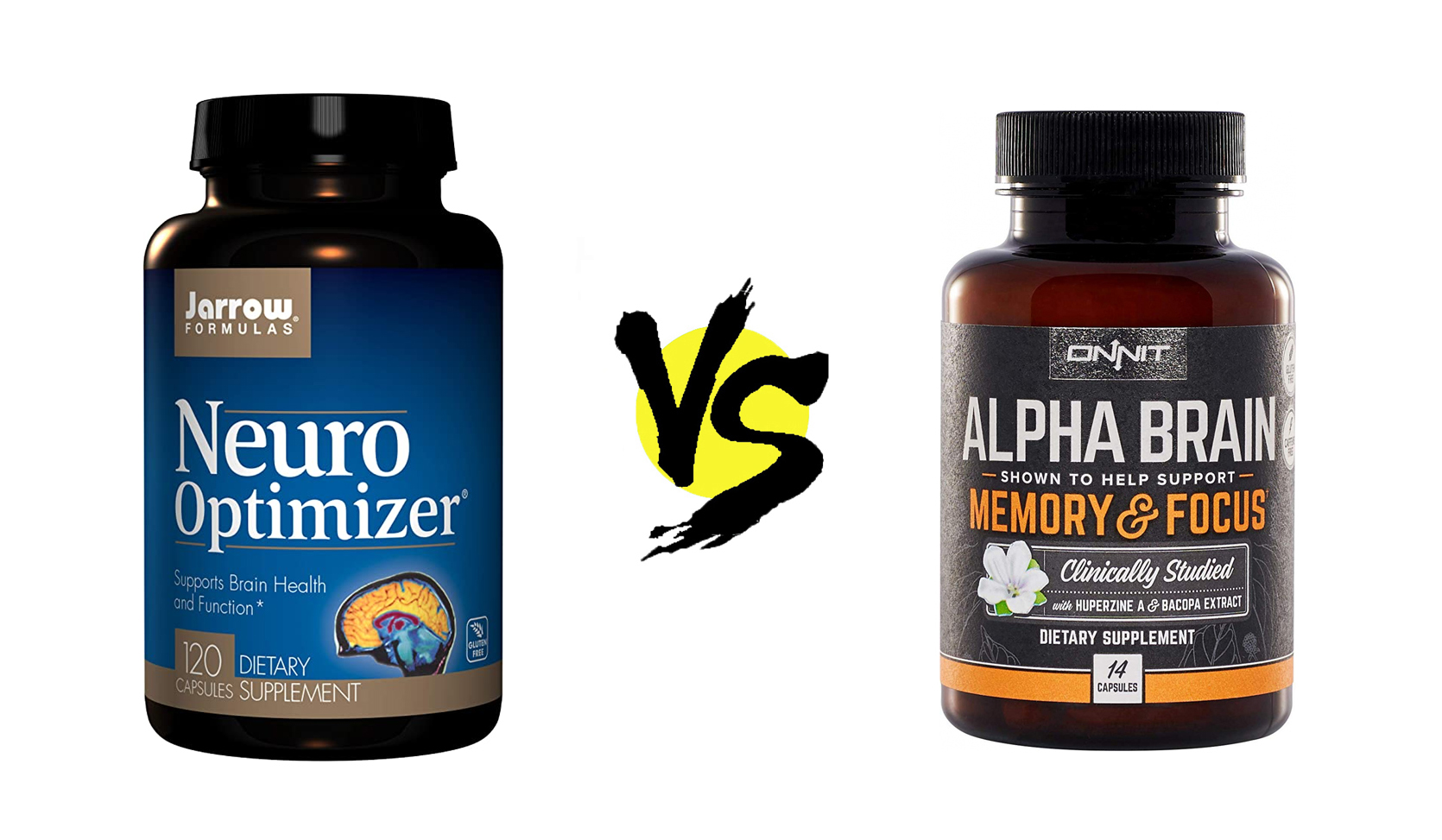 This comparison feels slightly off.

Is there really an objectively determined better option there? (Why not both!) Neuro Optimizer vs. Alpha BRAIN is similar in that they both provide brain healthy, nutritious sustenance, yet one is geared towards elderly cognition, whereas the other seeks the attention of all ye damn kids.

It almost doesn’t matter which one is quote-unquote better: If you’re old, you supplement Neuro Optimizer. If you’re young, you stick with Alpha BRAIN.

Unless these products’ marketing is off. (It wouldn’t be the first time in the supplement biz.) Both products are backed by positive reviews, but let’s do a comparison to double-check:

What’s the first thing you notice about these products.

Wait, really? I wasn’t going to say that at all.

The first thing I noticed was that Neuro Optimizer shows all of its dosages, whereas Alpha BRAIN does not. This is good for the former. Not for the latter. Yet, I’m willing to let it slide if Alpha BRAIN’s overall formula design can outperform Neuro Optimizer’s. Let’s take a look:

The highlight of Neuro Optimizer’s formula: Citicoline — and not just any citicoline but the well-researched Cognizin brand of citicoline, a two-part brain-charger that supplies brain healthy choline & cytidine, a precursor to the nootropic uridine.

Except that’s not all of Neuro Optimizer’s formula, in which are a remaining collection of good & meh nootropic selections:

Admittedly, ALCAR & maybe even taurine may qualify as meh nootropics, at least for some users, given that the former only helps elderly cognition and the latter is more sedative than nootropic. Altogether, these ingredients stack up to a decent cognitive enhancer & restorer for users at risk of age-related cognitive decline. Read my in-depth review on Neuro Optimizer.

Alpha BRAIN may not have the citicoline, but it does have a close second: Alpha GPC.

In fact, as a choline donor, alpha GPC is superior to citicoline for having more choline per serving than citicoline — although, as a nootropic, citicoline takes the cake for also providing cytidine.

Apart from alpha GPC, Alpha BRAIN also gets its name from L-theanine & oat straw extract, two alpha brainwave promoters: Alpha brainwaves being the slower brain frequencies associated with creative, free-flow thinking. Which is why these two ingredients are contained in the first of Alpha BRAIN’s three proprietary blends:

Topping off the blends is a patented cat’s claw extract, branded as ac-11®. While not a true nootropic, cat’s claw is a potent antioxidant, anti-inflammatory herb. And only Onnit has it. Read my in-depth review on Alpha BRAIN.

There’s only one ingredient shared between Neuro Optimizer & Alpha BRAIN: Phosphatidylserine, and even that nootropic is presented differently for formula. Rather than list out every ingredient that’s relatively unique between these two, I’ll go through the strong points of each, starting with:

ANTIOXIDANTS FOR BRAIN ENERGY. Though caffeine (and other stimulants) offer reliable bursts of short-term energy, the non-stimulatory pathway to energy enhancement is not only healthier but more sustainable in the long run. Antioxidants, such as alpha lipoic acid, ALCAR, PQQ, and CoQ10, help maximize mitochondrial ATP energy production, as opposed to simply flushing the brain with synthetic energy. One of the best brain energy boosters (without caffeine) is Performance Lab® Energy, an all-in-one stack of antioxidant-powered ATP energy enhancement. To learn more, read my Performance Lab® Energy review here.

Potency & quality is neither an exceptional strength nor weakness for either Neuro Optimizer or Alpha BRAIN, yet there are quality points I like in each:

Strangely, each supplement carries a bodybuilding ingredient (Neuro Optimizer → Glutamine; Alpha BRAIN → Leucine), which doesn’t seem to do much for cognition, essentially drawing from each formula’s overall nootropic power.

With that, Neuro Optimizer gains an edge on Alpha BRAIN that gets even edgier when you calculate the price difference between these supplements:

Neuro Optimizer or Alpha BRAIN: Which is better?

I have to hand it to a nootropic formula that not only doesn’t screw over the elderly in its quest to sell them a product but delivers a brain healthy cognitive enhancer for both long- & short-term thinking. While it’s not the best nootropic stack on the market, Neuro Optimizer demonstrates how to ethically alleviate age-related cognitive decline (rather than take advantage of it, as many supposed “elderly brain health” pills do).

Alpha BRAIN takes a more cool-guy, Joe Rogany approach to brain health with its athlete-geared, hipster “earth grown” formula. Granted, it’s not the highest quality nootropic formula, and it’s not even the best version of this formula (Alpha BRAIN Instant is clearly the superior option over standard Alpha BRAIN — read my Alpha BRAIN vs. Alpha BRAIN Instant review here.). But this is a decent, stim-free stack for clean, calm thinking.

Had this been a comparison review between Neuro Optimizer & Alpha BRAIN Instant, the latter would’ve won for two reasons that the original Alpha BRAIN misses out on:

Also, there’s the whole drink mix thing with the Instant formulation. That’s purdy coo, too. Except this is a comparison between Neuro Optimizer & Alpha BRAIN, the original. As such, I’ll be siding with the product that’s not only effective but half the price of its opponent. My recommendation: