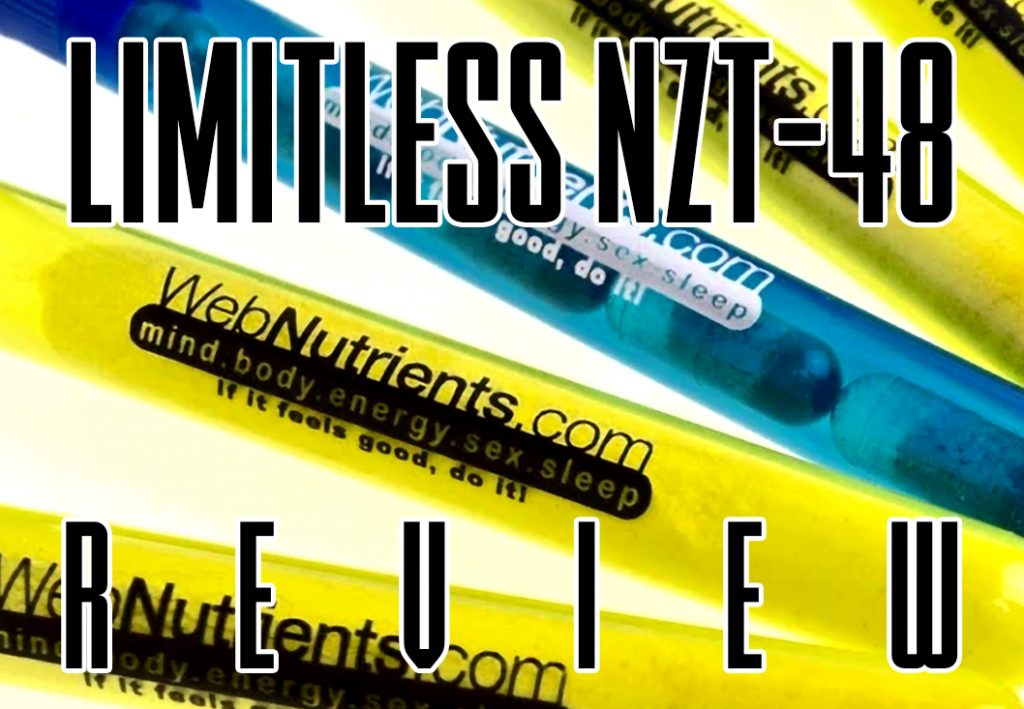 I’ll do my best to steer clear from “movie review” territory here.

But it needs to be said:

In the book (originally titled The Dark Fields by Alan Glynn), MDT-48 (the book’s name for the movie’s “NZT-48”) leads main character Eddie on a path of immediate smart pill-induced success only to (SPOILER ALERT!) subsequently push Eddie towards pill addiction, life-threatening health problems, & a bleak cliff-hanger ending that leaves little room for redemption past the final pages.

The Dark Fields is a cautionary tale against the “Adderall Age” we’re increasingly defined by, lending another strong argument for our need to return to natural, brain-healthy nutrition (i.e. nootropics).

The movie Limitless, on the other hand, sees our hero Eddie rising to smart pill-induced success, subsequently succumbing to NZT-48 addiction, health problems, and so on, only to (SPOILER ALERT!) use his unnaturally heightened cognition to manufacturer more NZT-48 and, presumably, continue his success beyond the film’s end.

Due to the complete shift in tone & meaning, the movie Limitless did less to detract people from seeking Adderall & smart pills and more to generate fantasies of NZT being a substance within Man’s grasp.

Serving Size: 1 tube, 1 capsule
Servings Per Container: 4 tubes, 5 capsules
Other Ingredients: Unknown
Directions: Add one complete tube to 20-28 oz water. Drink 4-6oz (150 ml) with 2 fish oil capsules for 1 tablespoon coconut oil or EFA’s) and a multivitamin or B-50/B-100. Wait 20-30 minutes to gauge your mental and physical response. Slowly sip the remainder, 1 oz every 20-30 minutes, based on energy/focus/motivation requirements. The more frequent you sip, the greater the effects. Take NooBoost capsule no later than 4PM for optimum results, or with your first sip of NZT. Refer to the website for updates and more detailed usage instructions.

Don’t worry, you’re not stupid: Asterisks aren’t actual “Amount Per Serving” units of measurement. Neither is “Unknown” an actual “Other Ingredient.” At first glance, the customized “Create-Your-Own” design of this nootropic stack is beyond cool in theory, but paints plenty of mysterious RED flags.

Either the manufacturers are brilliant or the marketing team is punking us hardcore. Regardless, let’s figure out how this all works:

All-in-all, there are 25 ingredient options in the powder mix portion of this stack. 25 ingredients, 1 optional (Restoramones), that vary in composition based on the customization form you fill in on WebNutrients’ website.

I won’t cover every ingredient here, because… well, I do have a bed-time. But I’ll go over the important ones–namely those that are unique to NZT-48. Starting with the uniquest* (*Scrabble counts this as a word ∴ so do I):

Omniracetam – Described as a “meta-nootropic” (which is BS), it’s patented & described by WebNutrients as “more stable and bioavailable.” Compared to what? I don’t know. It’s claimed to share characteristics with the following racetams:

NooSpark – Another WebNutrients ingredient, except this ingredient is composed of several ingredients. In other words it’s a blend, comprised of a number of compounds such as:

Notice the Doppler-style spacing of this list? Pretty cool, WebNutrients. Although, only Theanine is a worthy nootropic on this list. The rest are just non-nootropic stimulants.

None of these are absolutely necessary in this formula, but it’s a good thing they’re optional. Micronized Dehydroepiandrosterone (or DHEA) is a WADA Banned Substance. Competitive athletes beware.

Other ingredients in the powder drink mix fall under the general categories:

By no means is this a comprehensive listing of the NZT-48 powder mix, but it’s probably more than you need to know–considering we don’t even know how much of what may or may not go into each specific customized batch.

The NooBoost capsules supply more or less the same ingredients as the NZT powder mix. And similiar to the powder mix, the dosage levels of each ingredient vary based on how each user fills out the customization form.

The intent of the NooBoost capsules:

to enhance and extend the mental clarity, euphoria and mental energy.”

But no Restoramones option. Instead, there’s a new B-100 Vitamin Blend, which I imagine just contains a standard “multivitamin” supply of brain healthy B vitamins–yet, WebNutrients fails to describe the what & how much of what’s involved here.

From the viewpoint of a book nerd, the Real NZT leaves the starting block stumbling. It plays off the Hollywoodized version of the smart pill, indirectly associating itself with the impossible (100% brain capacity & Bradley Cooper-level good looks), removed of The Dark Fields‘ moral-imbued ending. And to make matters worse, WebNutrition includes the word “Real” in the product’s name, as if to insinuate that yes, indeed, NZT-48 exists, and here it is!

It doesn’t exist. Which is a good thing, by the way.

Brilliant marketing aside, Real NZT is a complex range of natural nootropic & non-nootropic ingredients that vary in dosage ratios per customer. Before placing an order, each customer must fill out a short customization form that includes questions such as:

So on and so forth, giving the manufacturers an idea of how to specifically formulate your formula.

Conceptually, the tailor-made formulas are cool. While most nootropics work for most people, not every nootropic stack fulfills the needs & wants of every consumer. As such, having a stack that tends to your personal adequacies & insufficiencies is incredibly valuable.

But “conceptually” only gets us so far.

For one, this design leaves way too many questions on the table–the most glaring question being: How do I know which ingredient is or isn’t working if the dosages aren’t displayed? Judging by the user reviews, no one can confidently state what’s in their specific formula. For all we know, everyone is getting the same product–regardless of what the customization form says. This doesn’t require too much cynicism to believe.

Additionally, the overall play on a fictional smart drug in addition to the premier ingredient (Omniracetam) playing off of the name “racetam,” despite not being a racetam at all, comes across as hokey.

And not the good kind of hokey.

The marketing appeal of Real NZT is that you’re receiving a customized nootropic stack that’s expertly stack to meet your special cognitive needs. It’s all very self-flattering and even a bit narcissistic — as if your customized Real NZT only works if you take it. When the truth is that this company is likely giving everyone more or less the same formulas with only a few key alterations made per order, based on the generic info you give them.

Really, if you’re looking for a customized nootropic stack, you’d do better to research the stuff yourself and then buy each ingredient individually, so that you may at least dosage each nootropic out properly to ensure that they’re actually working.

Because my trust in this company’s formulas — that they’re actually working to their fullest capacity — is very little.

Curious Limitless watchers. After watching the movie, there remains, in the back of the brain, the question: But what if NZT does exist? Real NZT sells itself as the answer. (It’s not, by the way.)

Real NZT is available directly through WebNutrients’ website, but can also be bought on Amazon — which is strange considering the product’s entire “customization” angle.

The question of the hour.

And one of the many questions left unanswered, unfortunately.

Without dosage levels, extract descriptions, etc., etc., it’s hard to say whether or not this formula works. Factor in the probability of a bad batch, then factor in the probability of a user/batch mismatch, then factor in all the unknowns of a constantly changing formula, and eventually you’re dancing with too many variables to say one way or the other.

The mystique is the appeal & a major RED flag.

At the end of the day, the decision is yours. If you choose to partake in the experiment, do us all a favor and document your experience as several other users have already done, so we can Scooby Doo this mystery together. Alright?

Or you can just read my Best Nootropic Supplements to Buy in 2020 list here.