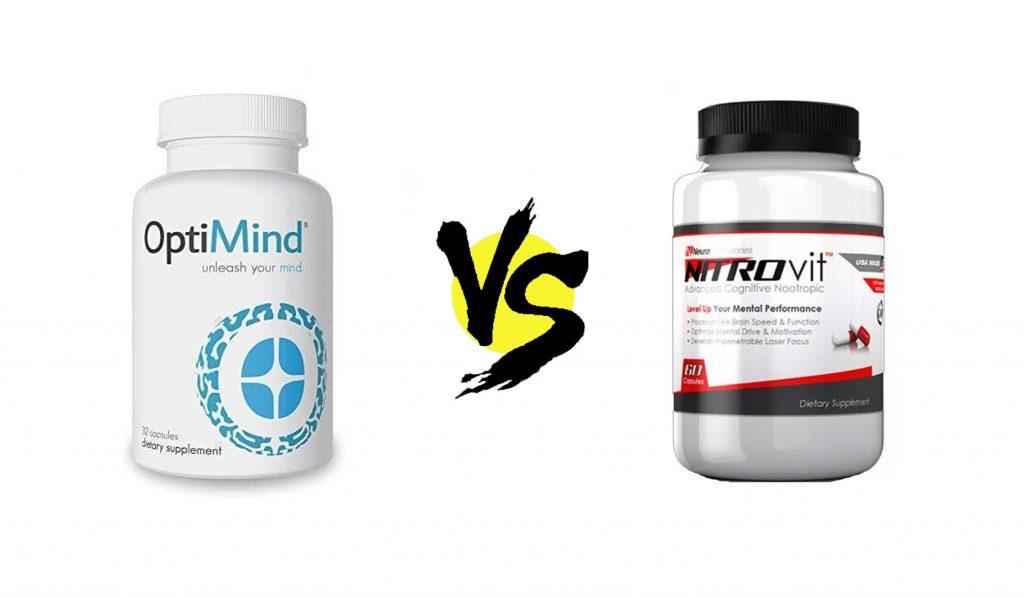 Is it better to optimize the mind?

Or nitro the vit?

I know: tough question — but it’s a question I intend to answer, once & for all, in this comparison review between the ultimate mind optimizer OptiMind & the world’s leading nitro-vitter NITROvit. Except here’s where things get a little tricky:

What if I told you that NITROvit is actually intended to optimize the mind aaand (hold on, let me finish!) NITROvit actually optimizes the mind much better than OptiMind?

What if OptiMind actually doesn’t optimize the mind at all??

HAVE I BEEN LIVING A LIE?? Let’s find out:

One of these companies was spying on the other, because their formulas are damn near identical, with exception to a few key differences: The most apparent difference being OptiMind’s proprietary blend vs. NITROvit’s lack thereof.

Perhaps OptiMind truly has a winning formula that they want to keep secret?

Perhaps they’re full of BS? Which in turn would make NITROvit partially full of BS, given the formulaic overlap, right? There’s only one way to find out:

OptiMind is all about that bass–er, brain chemicals, otherwise known as neurotransmitters. Of it’s 12 ingredient proprietary blend (more on that later), 7 nootropics assist with neurotransmitters (dopamine, serotonin, acetylcholine, GABA, glutamate) in one way or another–with one of those ingredients being a neurotransmitter itself: GABA–which is actually a weak nootropic, unless consumed as picamilon or phenibut.

Interestingly, sulbutiamine can be found nestled in near the bottom of OptiMind’s prop blend list. This synthetic vitamin B1-B1 bonded nootropic is a rare sight in premade manufactured stacks, potentially giving OptiMind an edge on the market. Yet, the drug’s low prioritization in the formula is potentially a major bummer.

NITROvit has a very similar formula to OptiMind, sharing 7 ingredients with its opponent. Except whereas OptiMind hides these ingredients under a dosage masking proprietary blend, NITRO errs on transparency, revealing decent dosage amounts overall. Not the best, but decent.

NITROvit also avoids major synthetic nootropics, siding with more natural ingredients. If I had to pinpoint a counter to OptiMind’s sulbutiamine, I’d say it’s NITROvit’s alpha-GPC. This nootropic choline donor possesses one of the highest concentrations of choline that’s able to cross the blood-brain barrier. Choline not only provides more brain chemical support, but it operates as a general brainpower optimizer. For that, I actually prefer alpha-GPC to sulbutiamine, which doesn’t enhance long-term brainpower and actually loses value over time due to tolerance build-up. (Although I prefer citicoline to both alpha-GPC and sulbutiamine.)

On that note, NITROvit sneaks in 100 mg of caffeine, which isn’t exactly a nootropic source of energy. But then again so does OptiMind, so… whatever, yay.

The 7 ingredients shared between these formulas:

And of course, a dear ol’ favorite: Caffeine.

Yet, even within the similarities of these supplements, there are certain quality points unique to each product that deserve mention, starting with:

Neither OptiMind nor NITROvit are exceptionally potent or high quality… buuuuut there are two ingredients in which one product outperforms the other:

Other than that, I’m yawning a bit here.

I’m dismayed by both OptiMind & NITROvit’s reliance on caffeine, which is often used as a crutch for nootropic supplements that otherwise fail to achieve enhanced mental power or stimulation. Due to OptiMind’s proprietary blend, I’m more skeptical of the general bioactivity of their caffeinated formula over NITROvit’s. Particularly with GABA on OptiMind’s list, a nearly useless dietary supplement for its inability to cross the blood-brain barrier on its own.

Although, what’s more puzzling than that is the mismatch between quality & price, as illustrated below:

OptiMind or NITROvit: Which is better?

Better bacopa. Better phosphatidylserine. May not seem like major game-changers, yet these are two of the best nootropics currently on the market. Their quality is sure to make a difference here. As far as the rest of the formula goes… mehh, OptiMind could certainly improve a few of its ingredients (e.g. tyrosine to N-acetyl-L-tyrosine). I’m not saying OptiMind is a premium quality nootropic supplement. It’s just slightly better quality than NITROvit.

Overall, NITROvit is simply a better, more effective product than OptiMind, particularly when you include NITROamp, a short caffeine + L-theanine complement to NITROvit. In fact, the price total of buying NITROvit & NITROamp is still within the same ballpark as OptiMind, despite delivering more nootropics than OptiMind.

One final point of consideration: The integrity of these companies.

If you choose to side with OptiMind, I’d recommend taking caution with your credit card information. Buy through Amazon rather than through the manufacturers, and perhaps avoid that “free” trial altogether.

Or just avoid the hassle altogether by my ultimate recommendation:

Not satisfied? To learn more about the Best Nootropic Supplements to Buy in 2019, click here.