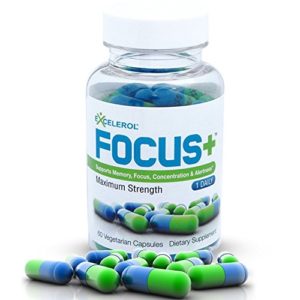 Excelerol may not be the “America’s #1 brain supplement” as it claims.

But it does carry the world’s #1 favorite brain drug.

You know what I’m talking about: Caffeine. And it doesn’t carry just one caffeine but EIGHT CAFFEINES. Or rather eight sources of caffeine, split into various forms and colors of teas, which are sort of a red herring: Black, Green, White, etc. teas all originate from the same plant. In essence, Excelerol’s formula lists the same ingredient over and over.

Confused? I don’t blame you.

Let’s read the Excelerol Focus Plus review to make sense of this madneth.

About Excelerol Focus Plus

First impression: Excelerol Focus+ seems have ingredient count confused with ingredient dosages. There are many ingredients in this stack (20!), but nowhere near enough milligrams to cover them all. Say, what’re you trying to pull here, Excelerol!!

Time to solve this mystery, ingredient by ingredient:

Vitamin B12 (as Methylcyanoblamin) – This is a strange one: “Methylcyanoblamin.” Try Googling that. It’s not a real B12 form but rather an amalgamation of methylcobalamin and cyanocobalamin. The standard Excelerol product corrected this to methylcobalamin, the preferred B12 form. Hopefully, Focus Plus carries the same. Either way, someone is getting fired. More on Vitamin B12.

Niacin – Vitamin B3, a circulation enhancer common to pre-workout supplements and a key constituent to the nootropic drug picamilon.

Only 325 mg to divvy across 16 ingredients. And most of those ingredients are natural sources of caffeine. Not the most nootropic approach to enhancing cognition. I’ll cover the actual nootropics first, then let’s figure out the caffeinated herbal extracts:

Ginkgo Biloba Extract – Known as a “Living Fossil” for its deep roots in this planet’s history, Ginkgo is a circulation enhancer with significant memory and mood benefits. More on Ginkgo Biloba.

Phosphatidylserine – One of my favorite brain health nootropics, favored for its general support of long-term cognitive health, so awesome even the FDA wrote a letter about it. More on Phosphatidylserine.

Alpha-Glycerol Phosphoryl Choline – Or alpha-GPC, a notable nootropic choline donor, precursor to acetylcholine and phosphatidylcholine. While I prefer citicoline as my choline source, alpha-GPC supplies more choline per serving. More on Alpha GPC.

DMAE – Sort of an overrated nootropic, given that we know very little of its bio-effects. Seems to benefit cognition associated with hyperattention and neurodegeneration. More on DMAE.

Holy Basil – Viewed as a sacred adaptogen in Ayurvedic medicine, holy basil is similar to rhodiola in its resistance boost against stress and anxiety.

The remaining ingredients — coffee bean extract, green tea extract, black tea extract, white tea extract, etc. — involve a series of herbal caffeine sources, each delivered in an “extract” form that, if I had to guess, is primarily comprised of caffeine. And then there’s peppermint and menthol, which are cool and minty! Chicka-chicka-yaaaaa.

In terms of ingredient count, the formula is inherently broken:

You can’t fit 16 ingredients into a 325 mg proprietary blend. 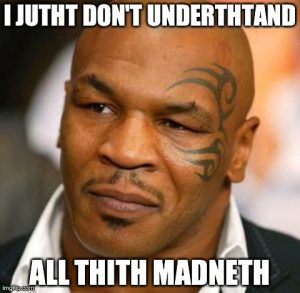 Well, technically, you can fit 16 ingredients into a 325 mg proprietary, but you shouldn’t if you want your ingredients to actually work. The fact that Excelerol Focus+ takes the proprietary blend route, masking its individual ingredient dosages, and fills the blend with a variety of caffeinated herbal extracts leads me to question the validity of its “nootropic” status.

I suspect the answer to that question is: Caffeine is a nootropic.

In which case, fine: Excelerol Focus+ certainly passes as a caffeine “smart pill.” It may even qualify as a healthy caffeine smart pill for its herbal admixture of caffeine and nootropics. Although, that point is somewhat diminished by the junky “Other Ingredients” additives.

Amazon grants a Subscribe & Save option, which adds a 5% discount to each bottle’s price, reducing each bottle’s cost to $18.92 (per month).

Who Takes Excelerol Focus Plus?

Charming, good-looking (paid?) reviewers. There are many positive customer reviews accompanied by videos of college students, mothers, workers, etc. recommending Excelerol Focus+ because “Honestly, i did not think Focus Plus would really help me focus better. I’m happy to say this product is definitely helping me!”

You can buy Excelerol Focus+ directly through the manufacturers as well as GNC and Amazon. Although, it seems to be easiest to find on Amazon (and it’s also cheapest there).

Conclusion: Does Excelerol Focus Plus Work?

Excelerol Focus+ certainly amps up the energy. And typically I’m lenient on this in a manufactured nootropic supplement, but only if L-theanine is provided to reduce the jittery side effects of excess stimulation.

Excelerol Focus+ does not have L-theanine.

Even the paid customer reviews acknowledge a jittery edge to this supplement, leading me to believe it doesn’t work as a bona fide cognitive enhancer. Given its cheap price, it may be worth the consideration if you’re looking to add caffeine to your DIY nootropic stack.

But as a standalone nootropic supplement? Not quite.