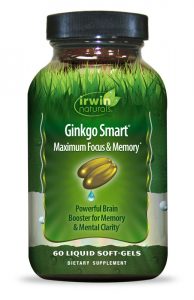 Over time, as we age, memory declines, cognitive functions diminish, and many, many other things in the brain that, um… I can’t quite remember… happen.

While I often praise the value of nootropics for their ability to enhance mental performance for increased mental output & productivity, and all of those other Silicon Valley-esque business buzzwords, I often forget that nootropics may help with something much more important than brainpower: Brain Health.

Ginkgo Smart is here to remind us that brainpower can only be achieved once brain health is taken care of. Let’s check out its brain healthy stack:

For a Ginkgo supplement there’s a lot happening here. Some good, some bad. Some excellent. But first let’s cover them all in the ingredient mini reviews:

Fish Oil (30% Omega 3 Fatty Acids) – Not a nootropic mental enhancer, but rather brain healthy nutrition for its anti-inflammatory brain cell membrane support. Ginkgo Smart’s Fish Oil takes up a majority of its formula.

Acetyl L-Carnitine – ALCAR is the right L-Carnitine form for brain energy, but this ALCAR is way underdosed. More on ALCAR.

Choline (as Choline Bitartrate) – The wrong choline form for nootropic cognition. Alpha-GPC and Citicoline are better options for brain health & cognition for their ability to cross the blood-brain barrier. More on Choline Sources.

Trimethylglycine (TMG) – Or Betaine, a metabolite of choline that’s believed to have anti-homocysteine effects. May offer cerebral cardio support, but there’s not enough research on betaine supplementation to know.

One of the missed opportunities in this stack is the ALCAR + ALA duo — a combination of antioxidant brain boosters that seem to work together to promote brain mitochondrial ATP energy production. Though Ginkgo Smart fails to deliver on this end, due to its poor dosages across the board, you can find this duo (and more antioxidant brain energy boosters) in Performance Lab Energy, one of my favorite all-natural, stim-free energy boosters.

Velvet Bean extract (10% L-dopa) (seed) – Mucuna pruriens is an awesome herb for many reasons, but its natural supply of L-dopa, a precursor to neurotransmitter dopamine, is especially cool for mental mood & cognition.

BioPerine® Black Pepper extract (95% piperine) (fruit), Ginger extract (5% gingerols) (root) – BioPerine is worth at least a point on these reviews for its nutrient absorption benefits. Supplements can increase the value of their formulas by adding only 6 mg of this stuff.

Ginkgo Smart offers smart, premium Ginkgo alongside a not-so-smart cast of friends. Not to say that the “friends” themselves aren’t smart, but the way they’re utilized (or not utilized) leaves much to be desired with this formula.

But before I get to the negatives, let’s touch on the positives:

Aside from that there’s not much left to praise here.

Another positive may be the additional bona fide nootropics (e.g. L-DOPA, Vinpocetine, & Hup-A), but these are nullified by the most negative negative of this formula: The dosages.

Almost across the board, Ginkgo Smart’s dosages need massive improvements. Essentially, everything beneath Ginkgo borders on worthless for the small dosages, and this includes Vinpocetine & Hup-A, which require very small milligram amounts to have an effect.

For example, Vinpocetine needs only 5 mg to have minimum effect.

With such microscopic numbers, I’m left hoping that BioPerine helps pick up some of the slack. Yet, I can’t imagine it’ll do enough, even for ingredients such as ALCAR & Choline Bitartrate, which don’t do much for cognition anyways.

All-in-all, Ginkgo Smart reads like a quality Ginkgo supplement, but it fails as a genuine, brain healthy nootropic stack.

While I’d recommend Ginkgo to all ages of nootropic users, this particular stack seems geared towards the more mature ladies & gents for its emphasis on brain health over brainpower.

Being an Irwin Naturals product, Ginkgo Smart is easy to find and sold through various online & mainstream retailers.

The one thing Ginkgo Smart gets right is the ginkgo.

Aside from that …well.

By offering potent ginkgo extract with general ginkgo powder, Ginkgo Smart seems to cover a wide-spectrum of ginkgo bio-activities. At least more so than most ginkgo supplement sources.

However, frankly speaking, a good source of ginkgo isn’t exactly difficult to come by. In fact, considering that the one ingredient here that seems to do anything is the ginkgo, you may as well order a separate standalone ginkgo supplement and stack that with a separate nootropic that supplies adequately dosed cognitive enhancers. To mimic this formula with a formula that actually works, I recommend stacking a standalone ginkgo product with Performance Lab Energy, an all-natural brain booster that supplies ALCAR, ALA, and more at much better dosage levels.

Or you can check out my Best Nootropic Supplements to Buy in 2020 list here for more nootropic inspiration.