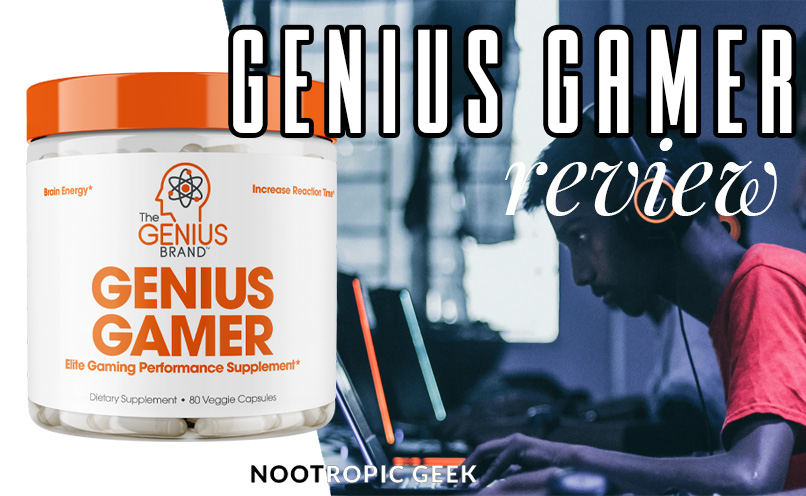 On the stimulation side of things, Genius Gamer offers an impressive mix of caffeine and smooth caffeine-like compounds that may help elevate mood and mental performance without the subsequent post-energy crash. However, the “nootropic” side of things here is showcasing a lot of weak, ineffective dosages, severely undercutting the potential of this “elite gaming” performance stack. Not to say the ingredients themselves are bad, just poorly dosed. Gamers can do better than Genius Gamer.

To see some of my favorite formulas, hit the following link:

As one of the more popular nootropic brands, likely due to how they’ve semi-dominated the Amazon nootropic market, the Genius Brand does have some pretty impressive formulas. However, Genius Gamer isn’t their best, namely due to the poor dosages (which I’ll likely be complaining about a lot throughout this review).

Yet, this isn’t to say that the ingredient choices are bad ones — they’re generally quite good — but their efficacy is doubtful due to the weak dosages. Either way, let’s check out the ingredients:

B-Vitamin Complex: Vitamins B1, B2, B3, B5, B6, and B12 — a solid (yet meager, dosage-wise) selection of B-vitamins, which are popular in many energy drinks and gaming formulas due to their association with mood, motivation, and catecholaminergic repletion. Always smart to stack these with L-tyrosine, as they help convert tyrosine into mood-related neurochemicals… but, again, those dosages are very not good. More on B Vitamins.

Caffeine (as VitaShure 65% Sustained Release): Altogether supplying 13.5mg caffeine, this is essentially a very small caffeine dose. Of course, while everyone loves caffeine, caffeine serves a special advantage for gamers who rely fast-twitch movements and laser-sharp focus. Personally, I’m a fan of small caffeine doses, and this really isn’t bad considering the dicaffeine malate and methyliberine. More on Caffeine.

Dicaffeine Malate: Essentially a buffered form of caffeine that’s purported to last longer than traditional caffeine while also mitigating the “crash” side effect of the caffeine comedown.

Methyliberine (as Dynamine™): a pure alkaloid sourced from kutcha tea leaf, methylliberine is structurally and functionally similar to theacrine (the next ingredient), which seems to improve energy, mood, focus via activating dopamine receptors and other neurotransmitter pathways — albeit without elevating heart rate or blood pressure.

Lutein + Zeaxanthin (Marigold Extract) from Lutemax® 2020: two popular carotenoid antioxidants for vision health, lutein and zeaxanthin are naturally concentrated in the macula, the region of the retina associated with sharp central vision. Naturally, for gamers staring at computer screens, eye health is important, and so adding a little lutein and zeaxanthin to your daily diet may go a long way to protect against the negative visual effects of excess blue light (i.e., screen) exposure.

Most gamers are content with straight-up caffeine for their “performance fuel.” However, Genius Gamer offers caffeine and then some with its impressive mix of caffeine, dicaffeine malate, methyliberine, and theacrine. Essentially, by combining caffeine and these caffeine-like compounds, Genius Gamer delivers on the cognitive enhancing benefits of caffeine while mitigating its jittery downsides with a collection of “smoother” milder caffeine-like bioactivities.

Which is great for gamers who play best when their brain juices are flowing yet their mindset is still calm, collected, and composed.

Truth be told, it’s not too hard to get your hands on theacrine, methylliberine, etc. — you can buy these ingredients pretty cheaply and make your own gamer fuel stack. Not that everyone has the time for that, but if you’re genuinely an “elite gamer,” you’d make the time.

So, what Genius Gamer needs to do to set itself apart from the “gaming formula” competitors is stack its caffeine(-like) ingredients with some genuine next-level nootropic brain-boosters. And Genius Gamer kind of does that with its selection of tyrosine, citicoline, and B-vitamins… but the problem is: they’re all so poorly dosed.

Well, so what if they’re poorly dosed, there’s 80 capsules in this thing, right? I can just double, maybe even triple up on the serving and then I’d be good, right??

Even if you were to double, triple, or even quadruple the serving size, the dosages still wouldn’t be that great. And then you’d run into the problem of burning through your bottle much too quick, lessening the product’s overall value. While this doesn’t make this the worst formula in the world, it personally makes it a no-go for me. Certainly, having a source of nootropic-enhanced caffeine is great for gaming, but Genius Gamer got too cheap on the “nootropic enhancement” part of this equation — and they shouldn’t have because there are other formulas that do this quite well. (See, for example, Performance Lab Stim — review here.)

All in all, Genius Gamer delivers on the stimulation front, but fails where the nootropics are concerned.

However, having said that….

With such meager dosages, you’ll definitely need to double, triple, maybe even quadruple your daily serving count to notice any significant cognitive benefits here. And, of course, doing so will double, triple, quadruple, etc. the cost per serving here. In other words, there’s a catch to the great deal here, and that catch is essentially that, well… it’s not really that great of a deal lol sorry to say it.

Gamers. It’s all in the name: Genius Gamer is for gamers. With G Fuel paving the way for gaming-related caffeine supplements, especially as a “healthier” alternative to sugary energy drinks, Genius Gamer feels like an “even healthier” energy drink alternative that’s riding the wake behind G Fuel. Though if I were a competitive eSports player, I’d shoot for something more powerful and effective than Genius Gamer.

You can buy Genius Gamer directly through the Genius Brand website or through Amazon.

Genius Gamer does work for boosting cognitive energy and focus, and in a way that’s conducive to better gaming. But the results aren’t totally stellar — e.g., you’d likely get similar or better results by simply drinking a Xyience energy drink.

Either way, I wouldn’t necessarily choose Genius Gamer, though it’s not exactly the worst formula. Just not that impressive or valuable, in my super-duper humble opinion. Having said that, if you’d like to see more nootropic stacks that do impress me, hit up the following link: Best Nootropic Supplements.