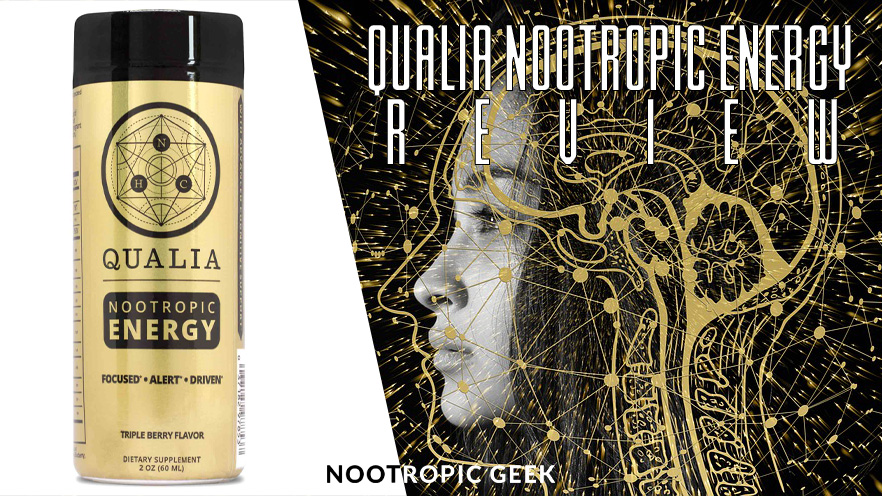 Is there such a thing as “overachieving,” or is that just a pathetic pejorative uttered by the jealous and resentful? Or both?

Let’s go with both.

For one, there’s the price.

For two, there’s the overall too-muchness of the formula.

When it comes to ingredient choices and ingredient quality, this is an impressive formula. Qualia is consistent in these areas. But to better understand what’s going on with this supplement, let’s take a closer look at each ingredient:

Niacin (as niacinamide): a decent amount of vitamin B3, as niacinamide, the non-flush type of this essential vitamin. For energy purposes, B3 might work by promoting NAD+, which has been associated with improved cognition, but more research is needed to determine if niacin actually achieves this effect.

EnXtra® Alpinia galanga Root Extract: a patented, researched-backed herbal extract that seems to support alertness and focus for up to five hours with or without caffeine, potentially even mitigating the caffeine crash withdrawals. Much of these claims are based on this clinical study.

N-Acetyl L-Tyrosine: this is, next to L-theanine, my favorite amino acid to stack with caffeine — i.e., to stir into my morning coffee, especially on particularly groggy mornings. L-tyrosine is a stress-relieving amino that works by converting to catecholamine neurotransmitters (dopamine, norepinephrine, epinephrine, etc.), the same brain chemicals that indirectly facilitate caffeine’s stimulatory activities. More on NALT.

L-Tryptophan: this is an interesting ingredient choice. L-tryptophan is another amino acid that seems intended here not for its sleep aid support (obviously) but rather for its NAD+ promoting bio-activities. Remember that NAD+ is a key compound involved in cellular metabolism and energy production.

L-Theanine: the addition of this green tea-sourced amino acid alone qualifies Qualia Nootropic Energy as a truly nootropic source of energy. One of the most popular nootropic combos — caffeine + L-theanine — is popular for a reason: L-theanine removes the jittery side of caffeine while leaving the stimulant’s focus-sharpening, energy-boosting benefits. More on L-Theanine.

Alpha-Glycerylphosphorylcholine (alpha GPC): of the nootropic choline donors, alpha-GPC is the most choline-dense, though it lacks citicoline’s brain boosting cytidine. More on Alpha-GPC.

Wild Blueberry Fruit Extract: blueberries are a great source of brain healthy antioxidants, such as resveratrol and pterostilbene; however, I’m unsure of the potency of this berry extract. A 95% min. standardized extract of maritime pine bark extract‘s proanthocyanidins perhaps would’ve been better here, both for energy and cognitive enhancement purposes.

Organic Coffeeberry® (Whole Coffee Fruit Extract): here it is, the caffeine, supplying a healthy 90mg caffeine, which is roughly the amount of caffeine that comes with an average 8 oz cup of coffee. This is a smart, modest amount. More on Caffeine.

Cereboost™ American Ginseng Root Extract: a premium, potent extract of one of my favorite mind-body herbs: Ginseng. This truly is a unique herb, due to ginseng’s simultaneous ability to relax and stimulate the body, almost as if this herb helps restore metabolic homeostasis across the brain and body. More on Ginseng.

Celastrus paniculatis Seed Extract: referred to as the “Intellect Plant” in the Ayurvedic health tradition, Celastrus paniculatis is a well-known, time-tested herbal nootropic that, in my opinion, still needs more love from the modern nootropic community. This is a great nootropic for promoting cholinergic brain activity presumably through Celastrus’ acetylcholinesterase inhibition activity. More on Celastrus Paniculatis.

Saffron Stigma Extract: this gets an “okay, sure” out of me, not because Saffron Stigma Extract is a bad ingredient — it’s a decent spice extract for mood and vision performance — but because it’s just another example of another ingredient that could be removed from this formula to reduce the product’s overall price, and no one would blink an eye.

Increasingly, I’m confused by Qualia’s approach to nootropic supplements. What sets nootropics apart from other health and fitness supplements (in a good way) is the DIY aspect of stacking nootropics. While meatheads fill their cupboards with big ol’ containers of hefty, multi-ingredient, powder supplements, nootropic users (or propellerheads, if you will) tend to line their kitchen shelves with small bottles and bags of standalone ingredients.

Much like your local coke dealer, hardcore nootropic users start their workday by measuring powders on a scale. After a late night, the nootropic nerd might measure out some L-tyrosine with a significant dose of phenylpiracetam for a little more oomph, whereas, on another morning, the same nerd might prefer a calming stack of L-theanine and phenibut to combat their early-morning anxiety.

The point is: today’s fitness and health gurus are all about on-the-fly customization.

Qualia, on the other hand, crams the entire Periodic Table of Elements in each of their formulas, which not only unnecessarily jacks up the price of their products (e.g., Qualia Nootropic Energy costs roughly a hundo$$$) but diminishes your ability to stack their supplements with other supplements.

On the days that I took Qualia Nootropic Energy, I did feel good — however, I didn’t feel good enough to justify this formula’s price tag. Given how cheap and easy it is to buy, say, phenylpiracetam — and to stack said phenylpiracetam with a slimmer stim stack like Performance Lab Stim — I ultimately felt burdened, not enhanced, by Qualia Nootropic Energy’s “premium” liquid stack.

Some of Qualia Nootropic Energy’s nootropics you’ll want to supplement daily, others you may only want occasionally. This mismatch is annoying.

All in all, Qualia Nootropic Energy is a good nootropic source of brain energy. But it’s bulkiness and costliness are puzzling, to say the least. Qualia would do better to split their formulas up into smaller, stackable, scalable supplements rather than whatever it is that they think they’re doing with these overachieving, overpriced behemoth stacks.

*The Qualia website suggests that “20 2-oz Bottles” comes out to a 28-day supply, which …okay, sure, if you’re taking weekends off, then 20 bottles may last you 28 days. But don’t get it twisted: 20 bottles amounts to 20 days’ worth of supplementation.

Qualia is backed by impressive marketing, featuring a cast of doctors, authors, athletes, and other public figures who back these supplements. Likewise, based on my comments, I know that some of my readers have tried Qualia supplements. However, I don’t know who exactly Qualia Nootropic Energy is for, except for maybe people with extra money to spend and who aren’t savvy on nootropics enough to DIY customize their own nootropic stacks (which would be cheaper and more effective in the long run anyways).

You can buy Qualia Nootropic Energy through the Qualia online store, as well as Amazon.

Yes, Qualia Nootropic Energy works — and it works better than your average energy drink alternative supplement stack. The fact that Qualia didn’t market this supplement as an “energy drink alternative” is smart, considering that, ultimately, it’s much more than that: Qualia Nootropic Energy boosts energy with caffeine, counteracts the negative effects of caffeine, and promotes long-term cognitive health.

However, the fact that Qualia Nootropic Energy does more than boost daily “nootropic energy” is a misstep in my eyes. The better move for Qualia would be to slim this formula way down to bare “nootropic energy” essentials and put the slimmed off ingredients in a separate, affordable formula, thus giving its customers the option to stack/customize their Qualia supplements.

But as it stands, Qualia Nootropic Energy is a bit extra, as the valley girls (or whatever) like to say.